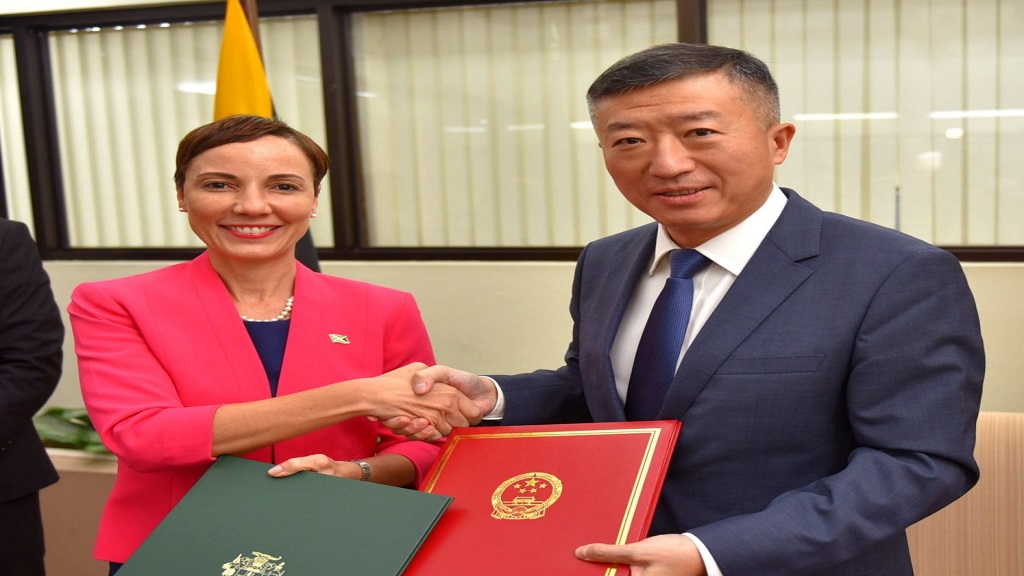 Minister of Foreign Affairs and Foreign Trade, Senator the Kamina Johnson Smith (left) and Chinese Ambassador to Jamaica, His Excellency Tian Qi (right), exchange the signed agreements under the Belt and Road Initiative (BRI), at the MInistry in New Kingston. (Photo via JIS)

Jamaica is poised to benefit from significant economic and infrastructural development initiatives under a new Memorandum of Understanding (MoU) with the People’s Republic of China.

Minister of Foreign Affairs and Foreign Trade, Senator the Kamina Johnson Smith, and Chinese Ambassador to Jamaica, His Excellency Tian Qi, signed the agreement under the Belt and Road Initiative (BRI), at the Ministry’s New Kingston offices last week.

Jamaica is the fifth Caribbean nation to sign on to the BRI, following Trinidad and Tobago, Suriname, Guyana and Barbados. Through the initiative, the Chinese are expected to invest heavily in a country’s infrastructure and economy.

“With today’s signing of the MOU, our two countries must now…develop a mechanism by which projects and programmes in priority areas may be proposed and evaluated at the technical level, forming the basis for potential agreements,” she noted.

She said that under the BRI, Jamaica and the People’s Republic of China will seek to deepen collaboration so as to promote greater connectivity in the areas of trade, facilities and infrastructure, policy coordination, financial systems and people-to-people connections.

“Such connectivity and the potential it holds can serve as a catalyst for bringing Jamaica closer to the attainment of our economic growth and sustainable development goals,” she added.

Senator Johnson Smith said that the new framework, coupled with existing bilateral mechanisms “can provide an impetus for increased trade and investment as well as channel support to critical sectors, such as infrastructure, logistics, and manufacturing.”

She noted that over the years, Jamaica and the People’s Republic of China have forged a mutually beneficial partnership transcending distance, size, level of development and culture.

The partnership between the two countries has resulted in many tangible outcomes, she said, citing acquisition of Alpart in 2016 by Jiuquan Iron and Steel Company (JISCO) and the proposed development of an industrial park and special economic zone alongside the JISCO/Alpart operations in Nain, St Elizabeth.

Additionally, she said that hundreds of Jamaicans have travelled to China on scholarships and training programme annually and have returned to the island to contribute to national development.

“These are but a few of the many projects which demonstrate the positive impact of bilateral cooperation with China,” Senator Johnson Smith noted.