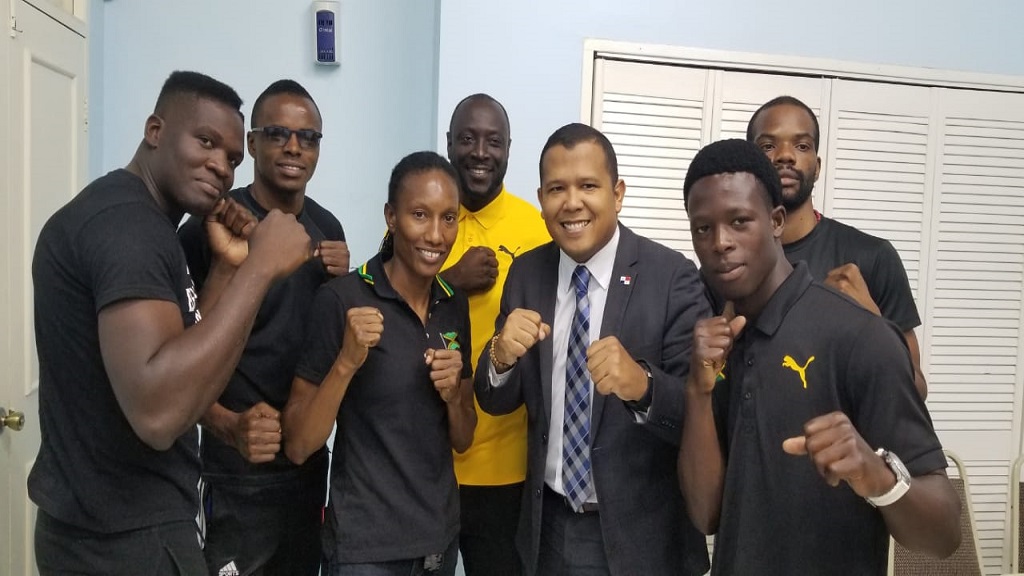 Jamaican boxers share a happy moment with head coach Gilbert Vaz (fourth left) and Third Secretary at the Panamanian Embassy, Roger Gonxalex Martinex (fifth left) at the launch of the Jamaica vs Panama Gloves Over Guns fight card at the Sports Development Foundation on Thursday, February 20, 2020.

The Jamaica Boxing Board of Control (JBBC) through its Gloves Over Guns initiative has announced a Jamaica versus Panama fight card to take place on Saturday, February 29 at the Montego Bay Cricket Club, starting at 7:00 pm.

The announcement was made at a Press Conference at the Sports Development Foundation on Thursday.

President of the JBBC Stephen Jones says the card will be used to celebrate the official opening of the Montego Bay Boxing gym. This comes two years after JBBC in collaboration with the Montego Bay Cricket Club (MBCC) had outlined plans for the establishment of the boxing gym in Montego Bay.

Jones further stated that the fight card will give Olympic hopefuls from both countries a chance to compete against high-quality oppositions ahead of their qualifying tournaments.

The boxing president also said that the card was organised based on a request from Panama.

Jones said, "We’ve been doing a lot with boxing with the youths, our amateurs, and our elite boxers.  Not just Panama, but the Caribbean and the Central Americans, they have been watching what Jamaica has been doing and at a time like this where you have the Olympic qualifiers coming up for the Americas, Panama president contacted us to say they would like a friendly international so their boxers can have a nice competition before going to the qualifiers and our boxers can do the same, so we will be using our best boxers, our elite boxers to go up against theirs because it's a big year in boxing worldwide.”

He said, “I think that this event will help the fighters in both countries to improve their level.  Panama has a good story in professional boxing.  Pamana and Jamaica will want to interchange cooperation in sport because Panama will prepare for the Central Caribbean Games in 2022 and Panama need help in track and field and Panama will help Jamaica in boxing and basketball and football.

" I think Panama and Jamaica have a good relationship right now.  I think that this boxing event is wonderful for both countries."

"We will also be having three youths on the fight card, Ashani Lawes, who is one of our bright promising young champions and Arnold Anderson will also be on that fight card, so we will pretty much have a good fight card lined up with all the boxers.  We expect to win.  We hope we can sweep all seven bouts."

The fight card represents the second in 10 months that Jamaica will be hosting Panama. Jamaica lost three bouts against Panama last April.