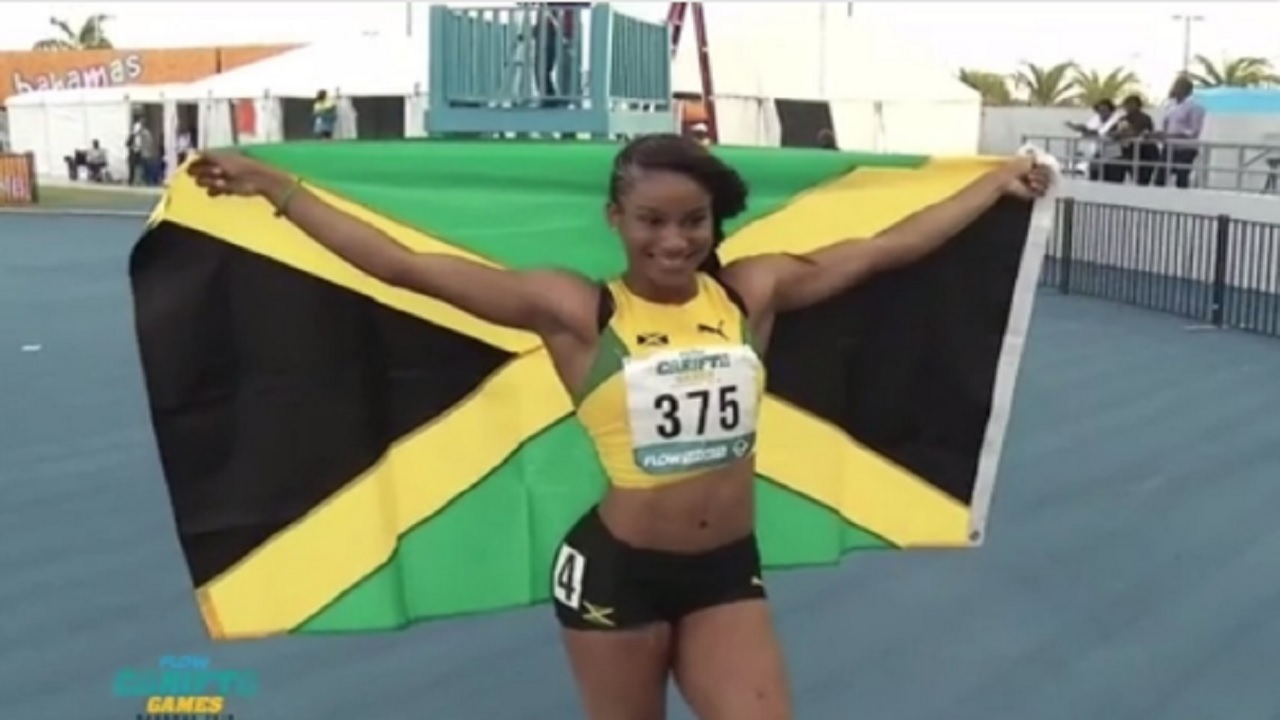 US-based Jamaican Briana Williams celebrates after taking gold in the Girls' Under 17 100m at the 2018 Carifta Games in the Bahamas on Saturday's first day.

Jamaica's junior athletes are on course to win the Carifta Games for 34 straight years after dominating the opening day of the 2018 staging on Saturday in the Bahamas with 21 medals.

Jamaica made a clean sweep of the 1500-metre finals and posted one-two finishes in two of the races.

The Girls' Under 17 1500-metre final produced the first one-two finish for Jamaica. Rushana Dwyer won the race in 4:47.90 seconds to lead home her teammate Theresa Graham, who clocked 4:48.30. The Jamaican pair finished well ahead of third-place Shaquka Tyrell of Guyana, who completed the course in 4:55.97.

The other one-two finish came from Shaquena Foote and Kara Grant in the Girls' Under 20 1500-metre final.

J'Voughnn Blake and Javon-Tae Williams were the other gold medal winners for Jamaica in the 1500 metres.

Evan Jones (4:02.93) of the US Virgin Islands and Alexandre Gauthierot (4:03.26) of Guadeloupe finished second and third.

In the 100-metre finals, Jamaica secured three of the four gold medals, including a one-two finishes in the Boys' Under 17 and Girls' Under 20.

US-based Briana Williams won the Girls' Under 17 100-metre final in a super fast 11.27 which erased the previous meet record of 11.28 set 20 years ago by Reneika Beam of Bermuda; while her Jamaican teammate Serena Cole (11.90) could only manage sixth.

Both Jamaicans finished outside of the medals in the Boys' Under 20 100-metre final. Michael Bentley (10.47) and Ryiem Robertson (10.48) ended fourth and fifth in a close finish for the bronze medal.

The Jamaicans were denied by Bahamian Adrian Curry, who clocked 10.46 for the bronze behind his teammate Joel Johnson (10.31) who easily took gold and US Virgin Islands' Rikkoi Brathwaite (10.43).

Jamaica secured four medals in the 400-metre finals, including a gold courtesy of Kingston College student DeShawn Morris in the Boys' Under 20 section.

Jamaica's other quarter-miler Antonio Watson, who replaced the injured Anthony Carpenter, did not advance out of the preliminary round after pulling up in Heat 1 during the morning session.

Jamaica's other medals in the 400-metre finals came from Daniella Deer, Charokee Young and Janielle Josephs.

Shantae Foreman, Roje Stona and Aiko Jones were the gold medal winners in the field.

Foreman won the first medal for Jamaica at the Games with victory in the Girls' Under 17 high jump final during the morning session.

The Excelsior High student cleared 1.74 metres to win the gold medal, just nine days after she soared 1.80 meres to break her record in the Class 3 high jump final at the ISSA/GraceKennedy Boys and Girls' Athletics Championships at the National Stadium.

Vanessa Mercera (1.71m) of Curacao finished second for the silver medal, while M'Kayla White (1.65m) from The Bahamas took the bronze medal.

Stona took the Boys' Under 20 Discus Throw with an effort of 63.77 metres. It was a one-two finish for Jamaica with Kai Chang taking silver with a throw of 60.63 metres.

Jones' gold medal came in the Girls' Under 20 Shot Put final, the Jamaica taking victory with a throw of 13.53 metres to beat Lacee Barnes (13.40m) of the Cayman Islands and Ianna Roach (12.91) of Trinidad and Tobago.

Jamaica’s junior athletes equalled their best ever medal haul of 86 to win the Carifta Games for 33 straight years at the multi-purpose Ergilio Hato Stadium in Willemstad, Curacao last year.

In the 45-year history of the Carifta Games,  Jamaica have won 40 times.

The last Jamaica lost was in 1984 when The Bahamas won at home.

Watson to run 400m at Carifta Games; Carpenter out due to injury

WATCH: The history of Labour Day