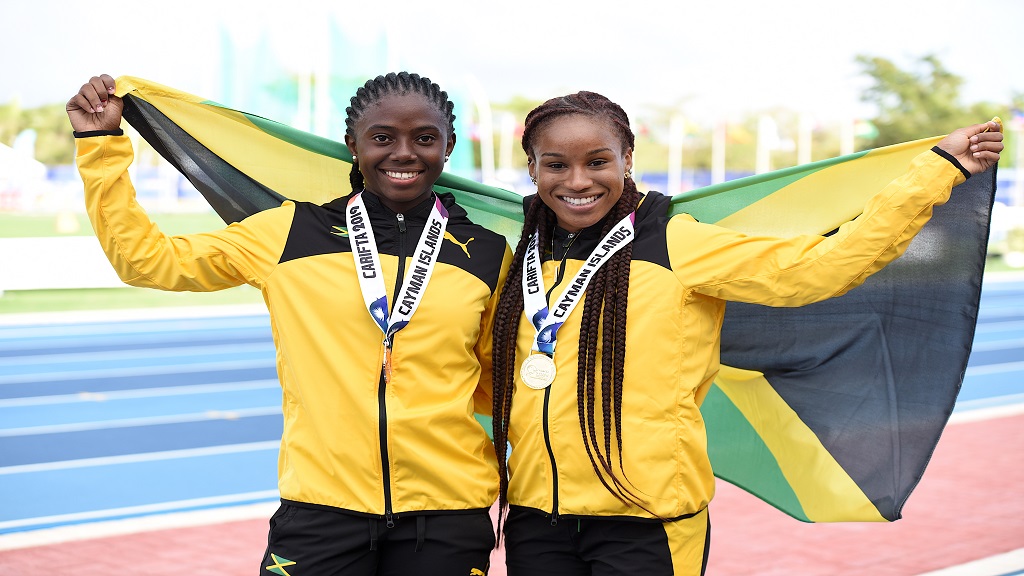 Briana Williams (right) and Joanne Reid celebrate with the Jamaican flag after a one-two finish in the Girls' Under-20 200m final at the Carifta Games in the Cayman Islands on Sunday, May 21, 2019. Williams won the event to complete the sprint double.

Jamaica are on course to win their 35th straight title heading into Monday’s third and final day of the 48th annual Carifta Games at the Truman Bodden Sports Complex in the Cayman Islands.

The Jamaicans will enter the final day with 57 medals comprising 19 gold, 25 silver, and 13 bronze.

The Bahamas are in second place with 16 medals comprising nine gold, two silver, and five bronze.

Jamaica have topped the medal table 41 times and their last defeat was in 1984 when The Bahamas won at home.

Williams, competing in her first year at the Under-20 level, had claimed the 100m title on Saturday in 11.25 seconds but was looking to seal the 200m crown.

She achieved the feat for the second straight year by clocking a very fast 22.89 seconds to win the 200m, the fastest time in the world this year by an Under-20 female athlete.

It was a one-two finish for Jamaica as St Jago High’s Joanne Reid ended as the runner-up in 23.69 seconds, while British Virgin Islands’ Beyonce Defreitas rounded off the podium by clocking 23.79.

Xavier Naire of Wolmer’s Boys School continued Jamaica’s success by winning the Boys’ Under-20 title in a big personal best 20.65 to add to his gold at the ISSA/GraceKennedy Boys and Girls’ Athletics Championships.

Naire, who finished third in the event last year behind compatriot Christopher Taylor and Bahamas’ Joel Johnson, led home a one-two finish for Jamaica this time around. Antonio Watson of Petersfield High finished second in 20.83, while Terrance Jones of The Bahamas came home third in 20.89.

Jamaica had earlier secured three medals in the Under-17 200m finals. 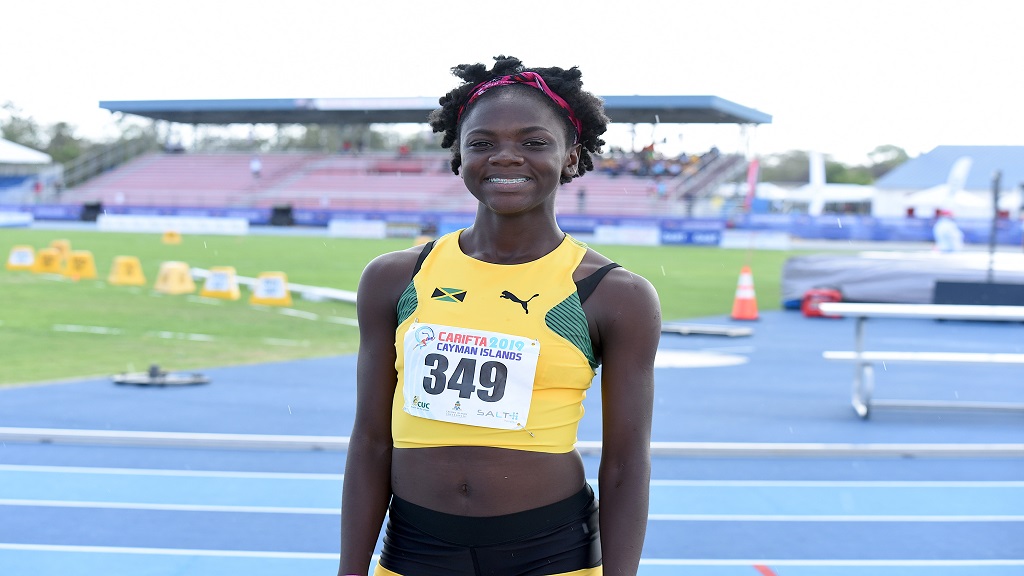 Brianna Lyson after winning the silver medal in the Girls' Under-17 200m.

Brianna Lyston of St Jago High clocked 23.53 for second place in the Girls’ Under-17 200m. Trinidadian Shaniqua Bascombe won the event in 23.36, while St Vincent and the Grenadines’ Ulanda Lewis finished third in 24.09.

Foote completed a second gold medal in the Cayman Islands.

Foote, who won the Girls’ Under-20  400m title in 52.63 seconds on Saturday, returned on Sunday to take the 400m hurdles crown very easily in 58.05 seconds. It was a one-two finish for Jamaica as Johnelle Thomas finished strongly behind her teammate, claiming the silver medal with a time of 58.77.  Trinidad and Tobago’s Tamia Badal was third in 1:02.34.

Jamaica also dominated the Boys and Girls’  Under-17 400m hurdles with one-two finishes to succeed in three of the four obstacle races.

In the Boys’ Under-17 400m hurdles, Jayden Brown of Kingston College easily won in 53.03, while Sharvis Simmonds of Excelsior High clocked 54.11 for the runner-up spot.  Aren Spencer of Barbados completed the podium spot with a time of 54.26.

This time around, Farquharson clocked 1:49.64 seconds to relegate Tyrice Taylor (1:49.73) to second place. The front-running St Vincent and the Grenadines’ Handel Roban (1:52.22) was well beaten into third place.

At the Carifta Trials in Kingston, Tyrice Taylor clocked 1:49.75 to beat Farquarson (1:50.33). A week before the trials, Farquharson (1:48.67) outbattled Tyrice Taylor (1:48.91) at the ISSA/GraceKennedy Boys and Girls’ Athletics Championships, also in Kingston, to smash the 32-year-old meet record in Cass 1.

KC’s Wayne Pinnock continued his impressive season by closing the night with victory in the Boys’ Under-20 long jump with an effort of 7.84m. Jordan Turner of Calabar High finished second with an effort of 7.33m, just marginally ahead of third-place Kelsey Daniel (7.32) of Trinidad and Tobago.

The third and final day on Monday begins at 10:00 am with the boys' pole vault open final.

More than 500 athletes from across the Caribbean are taking part in the premier track and field meet in the region.