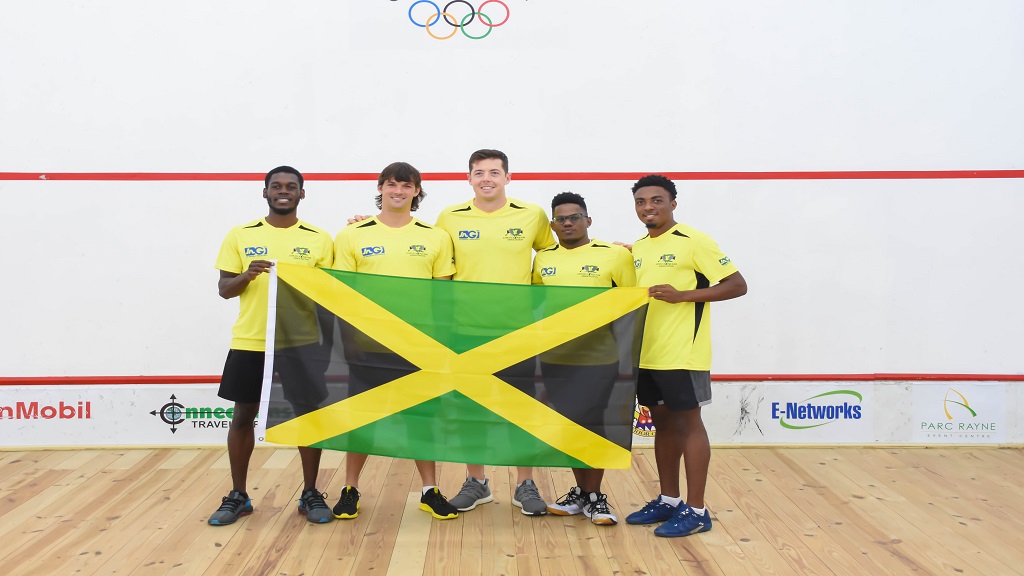 Members of Jamaica’s senior national squash team who won a silver medal at the 2019 Caribbean Area Squash Association’s Senior Championships at the weekend in Georgetown, Guyana.

Jamaica took the silver medal in the team competition after losing 3-2 in a hard-fought battle against hosts Guyana as the 2019 Caribbean Area Squash Association’s Senior Championships wrapped up over the weekend.

It was the showdown of the tournament as the two top-ranked teams waged an epic battle for the sought after trophy.  Guyana drew first blood when Kristian Jeffrey beat former All Jamaica Champion, Dane Schwier 1-11, 11-9, 11-6, 11-13, 6-11 to start the slugfest. However, former  Jamaican and Caribbean Junior champion, Julian Morrison came through to defeat Guyanese boy wonder, Shomari Wiltshire 8-11, 11-2, 11-4, 11-5 and even up the score.

Veteran player and senior national team manager, Douglas Beckford, won bronze in the over 60 category; while Lumley and Morrison placed third in the men’s doubles competition.

Summing up the campaign, Beckford said, “while we obviously would have wanted to take the team title there is still a lot to cheer about because we are leaving the championships with the silver medal, bronze medals in doubles and veterans and of course the gold in the men’s individual competition, which Chris Binnie won for the ninth time.”

“It’s also important to note that we have a multi-generational team so this is a great experience for our younger players who will form the vanguard in the years to come,” he added.

Chris Hind, General Manager of JN General Insurance, sponsors of Jamaica’s senior national team said, “we are tremendously proud of the players and we congratulate them on their silver and bronze medals. We are also thrilled to see Chris Binnie continuing to stamp his name on regional squash and we are happy that we have been able to support such a highly successful effort.”