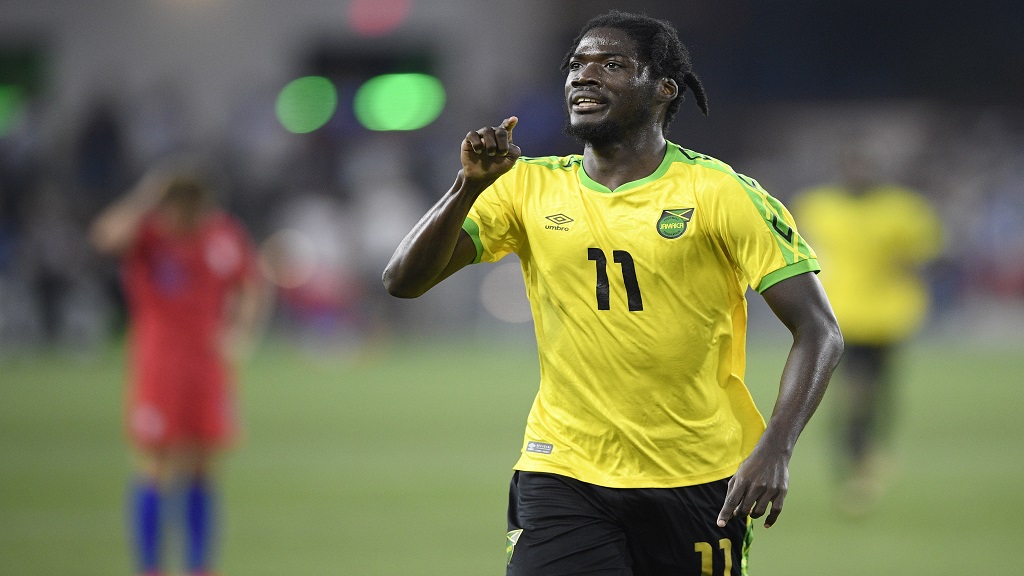 Jamaica forward Shamar Nicholson celebrates his goal during the second half of the team's international friendly football match against the United States, Wednesday, June 5, 2019, in Washington. Jamaica won 1-0.

Jamaica dealt the U.S. just their second home defeat to a Caribbean nation in a half-century, beating the Americans 1-0 in an exhibition on Wednesday night that made coach Gregg Berhalter's new-look team appear far from prepared for the Concacaf Gold Cup.

Shamar Nicholson took advantage of a giveaway by Christian Roldan to score from outside the penalty area in the 60th minute.

Without midfielders Christian Pulisic, Weston McKennie and Tyler Adams, the U.S. failed to generate much offense, and striker Josh Sargent squandered what chances he did have, including a point-blank shot that went wide in the 71st.

Since a 1969 defeat to Haiti at San Diego, the only U.S. home loss to a Caribbean team had been 2-1 to Jamaica in a 2015 Gold Cup semifinal at Atlanta. The Reggae Boyz beat the Americans for just the third time in 26 meetings, which have included 15 U.S. wins and eight draws.

Berhalter was hired in December and tasked with implementing a possession-oriented, attacking style. He started with three wins and a draw as he experimented with lineups but now has just one more friendly — against Venezuela on Sunday at Cincinnati — before the U.S. plays their first competitive match in 20 months.

Pulisic and Adams have yet to report to training camp following their European club seasons, and McKennie has a sprained left ankle. Forward Jozy Altidore did not dress and still has not played for the national team since the October 2017 loss at Trinidad and Tobago that ended the Americans' streak of seven World Cup appearances.

Nicholson, who debuted against the U.S. in February 2017, beat goalkeeper Zack Steffen from 22 yards after Roldan's giveaway, taking advantage of Wil Trapp's inability to pressure him. Steffen appears the likely Gold Cup starter after Brad Guzan was not invited to training camp.

Joe Gyau, a 26-year-old forward from Silver Spring, Maryland, entered in the second half in his third international appearance and first since 2014.

Berhalter started a three-man back line that included Matt Miazga on the right, Omar Gonzalez in the center and Tim Ream on the left.

Antonee Robinson, making his seventh U.S. appearance, was active on the left. His clean header missed high after a Jamaica giveaway in the 43rd minute.

Djordje Mihailovic had the last chance for the U.S., a breakaway in stoppage time, but he took a poor touch and was unable to get off much of a shot.

The U.S. open the Gold Cup against Guyana in St. Paul, Minnesota, on June 18. Berhalter planned to announce his 23-man Gold Cup roster on Thursday.

The U.S. and Guyana will play in Group D with Panama and Trinidad and Tobago.

Jamaica's Reggae Boyz have been drawn in Group C of the Gold Cup with Honduras, El Salvador and Curacao.

The Concacaf Gold Cup will be played in the Caribbean for the first time as a group-stage doubleheader takes place on June 17 in Jamaica at the National Stadium, the day when the Reggae Boyz will open their campaign.