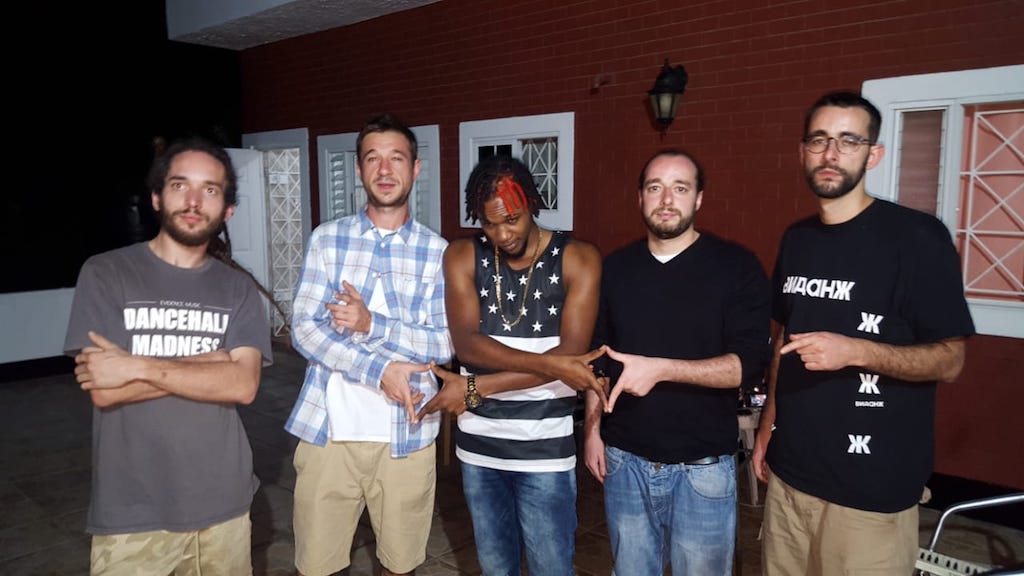 J Rile (centre) is generating a buzz in Europe.

European producers are eyeing J Rile as one of the dancehall-reggae industry's next big stars based on the buzz generated by his song, 'Jimmy'. That is the major reason producers from the independent label, Evidence Muzik.

"The 'Jimmy' song is doing well in Switzerland and Europe, all the sound systems over there are playing it all the dances, and that's why we came here to find him and do a collaboration with him," Nicolas Maitre, a member of Evidence Muzik, said.

The single, 'Jimmy', scorched the airwaves in recent months. The song tells a fascinating story of a murderous gangster who meets his demise after becoming Jamaica's most wanted. J Rile's ice-clear sound enhances the popular 'Tuff' instrumental's emotional core, winning him a legion of new teenage fans.

J Rile and Maitre have recorded a collaboration which has been tentatively entitled '5:55', which will be mixed and mastered in Switzerland. J Rile has big hopes that the collaboration will do well in Europe and build  his growing brand.

"It was great working with Nicolas in the studio, we had great chemistry and the song is really quite good. We are now shooting a video for the song this weekend, so there will be scenes in Jamaica and in Switzerland," J Rile said.

J Rile is already getting more offers for a number of other collaborations with international producers from Europe, Latin America and the Caribbean.

The red-hot rookie is applying the finishing touches on an EP called 'No Limit' with eight solid tracks.

"There are no fillers, all bangers," said the 25-year-old artiste, whose real name is Daniel Comrie.

Fans can look out for J Rile's latest song 'Up North' on the 'Sports Mode Riddim' also produced by Dane Ray & K Swiss.

"I also have a new single featuring Dane Ray representing for the generals with the local culture. It also has a hip hop feel to it that will make it a certified hit," J Rile said.

Riding his wave of popularity, J Rile has been doing a lot of shows on the north coast, one of which was the Oracabessa Barbecue held in St Mary.