Italy look to youth after failing to make World Cup 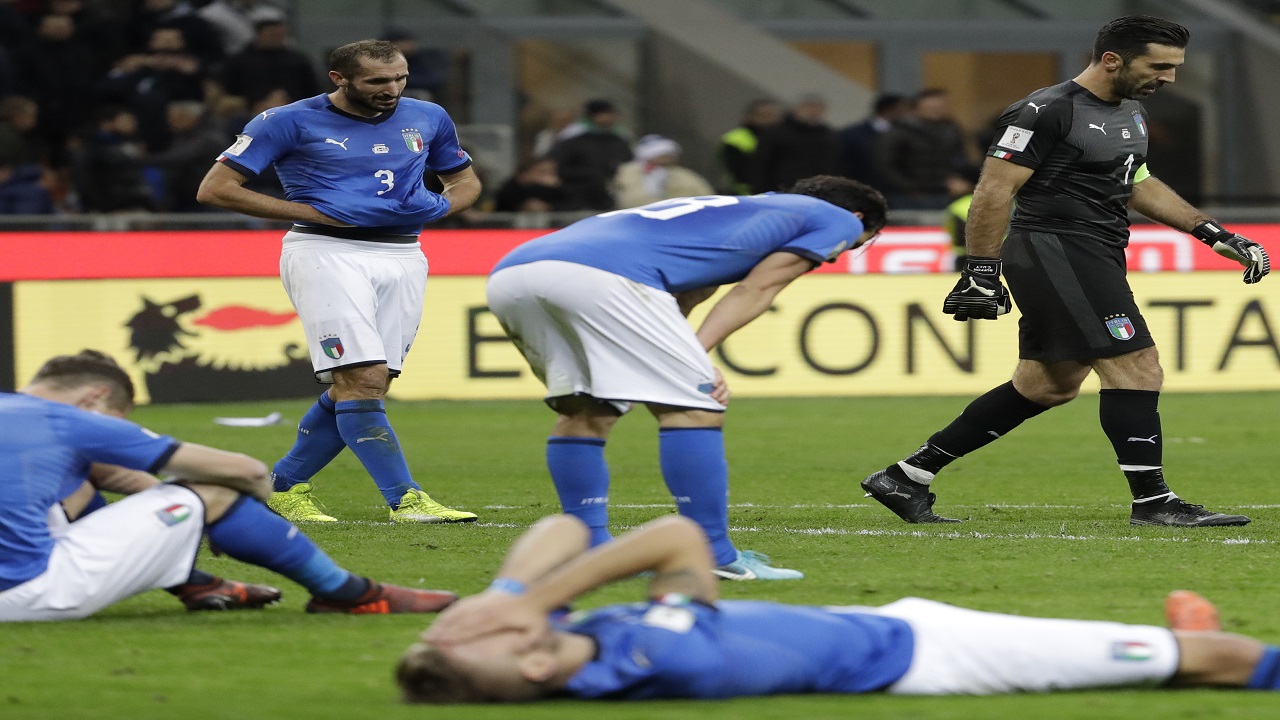 In this Nov. 13, 2017, file photo, Italian players react to their elimination at the end of the World Cup qualifying play-off second leg football match against Sweden, in Milan, Italy.

With the World Cup quarterfinals underway, Italy is left to wonder what might have been.

This is the first World Cup Italy has not participated in for 60 years. The four-time champion failed to qualify after losing a playoff to Sweden in November.

While frustrated Azzurri fans have been left to watch the action at home, Sweden has impressed in Russia and plays England on Saturday for a place in the semifinals.

"Not qualifying was devastating," new Italy coach Roberto Mancini said. "Apart from Brazil I haven't seen a national team that is better than us.

"When Italians meet me they tell me we could have also held our own in Russia and, seeing the teams that are there, I agree. It's disappointing to watch a World Cup without Italy but that's football and we can't do anything."

Italy was left reeling when it failed to qualify for the first time since 1958. A 2-0 defeat to Argentina and a 1-1 draw against England in March, under interim coach Luigi Di Biagio, did little to improve faith in the team.

Mancini was then named as permanent successor to Gian Piero Ventura and he started with a victory over Saudi Arabia, defeat to France and a draw against the Netherlands.

Italian federation CEO Michele Uva believes they have chosen the right man for the job and is confident the team will soon reap the benefits of the organization's focus on youth.

"The coach has a contract for four years: he's the right person to build a new path," said Uva. "Interesting young players are coming in, thanks also to the great work done for the Italy youth teams. The clubs are also getting back into investing in their youth sectors.

"In football, like all sport, you get the fruits of your investment after six to eight years. Our youngsters are coming through: the Under-17 team is second in Europe after losing the final in May on penalties, the Under-19 team is also second, having been beaten only by a super France team, the Under-20 team finished third in the World Cup and the Under-21 team is established among the four best in Europe."

Italy has an exciting crop of youngsters and Mancini has singled out Federico Chiesa (20), Lorenzo Pellegrini (22) and Mattia Caldara (24).

Mancini believes Italy's veterans can help them achieve their full potential ahead of the 2020 European Championship.

"I don't think everything is as negative as many have said," he explained. "Being eliminated in the playoff was devastating but the players we have are young and good. We have to have enthusiasm because what happened can't ever happen again.

"I've found a very willing group of players. My hope is they can all play regularly so they can grow a lot between now and two years' time. We must try to qualify for the Euros and build a team which can aim for victory so together with the youngsters we'll also need more experienced players ... then we'll think about the next World Cup."

One of the experienced players Mancini hopes can lead Italy out of the doldrums is Mario Balotelli after bringing the mercurial striker back into the fold following a four-year absence.

Balotelli repaid his faith by scoring the opening goal of the Mancini era, in the 2-1 win over Saudi Arabia.

Mancini previously worked with the striker for several years at Inter Milan and Manchester City.

"Am I the only coach who has managed to understand Mario? Well, for four years I've been in detox ... joking apart I've found him well, willing and with desire to work," said Mancini.

"I've always said it's up to him and his head. If he goes down the right road I think he can still be an important player for the national team."