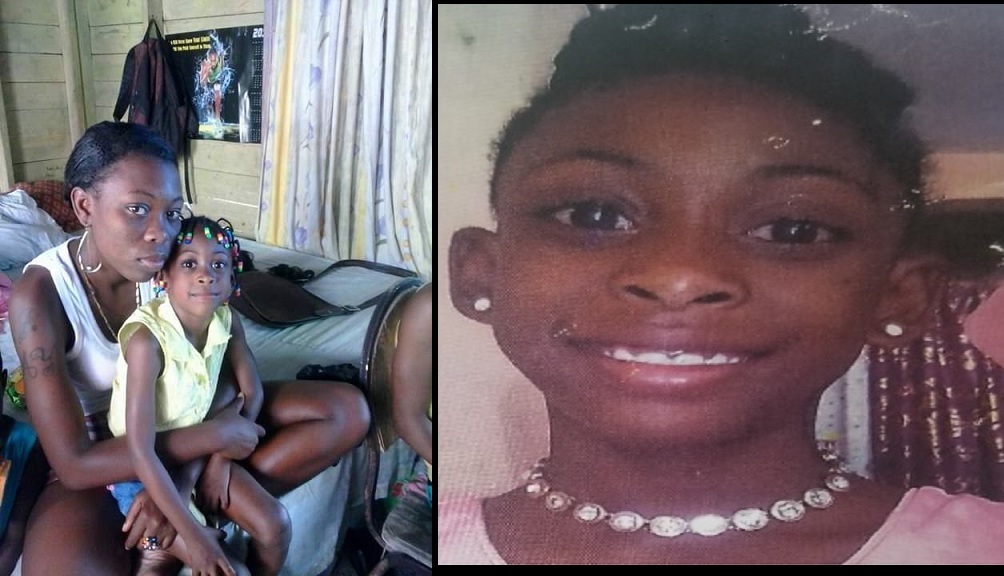 Combination of photos shows Shante and her mother at left; at right, Shante smiles to the camera in happy times.

When the decomposing body of seven-year-old Shante Skyers was discovered Tuesday, her mother Crystal Service was so overwrought with emotion and despair that she bolted away from the scene of anguish - so grisly she could never have imagined, even in her worst nightmares.

"When the soldier said he found her, I just ran off, I didn't scream, I just couldn't look, I just ran off and then mi blank out, and the next moment I wake up, I was at a shop, dem pick me up and revive me," Service told Loop News reporter Claude Mills.

The seven-year-old had been missing for five days before Tuesday's shocking discovery in a section of Sterling Castle Heights, known as Blue Hole. Shante's body had been found partially hidden by garbage.

"I am not doing so good at all right now. We haven't got any reports on whether she was molested, we are waiting on the authorities to call, we haven't even seen the body, or know when is the autopsy. People told me she had on her uniform and no shoes...she was so close to home, so close to safety," she said.

Shante, who attended Red Hills Primary, lived in the community with her grandmother and her father, Fabian Skyers. Service lives in Spanish Town, St Catherine. She believes that someone with a sickening and perverted disposition and who resides in the community committed the gruesome act.

"She used to walk with a lot of children to come home from school, but rain was falling that day, and everyone branch off; she was alone .So it has to be someone she knows. I have no enemies, I am not from the Red Hills area, so it has be some adult who was watching and waiting to do something like this," she said.

Service is 25 years old, but is estranged from her elder daughter's father. She kept in touch with her daughter through the phone.  She has a three year-old daughter who is yet to come to grips with the loss of a sister she barely knew.

"My three-year-old is too young to understand, but I am devastated by this news, she is my first child, and I loved her so much," she said.