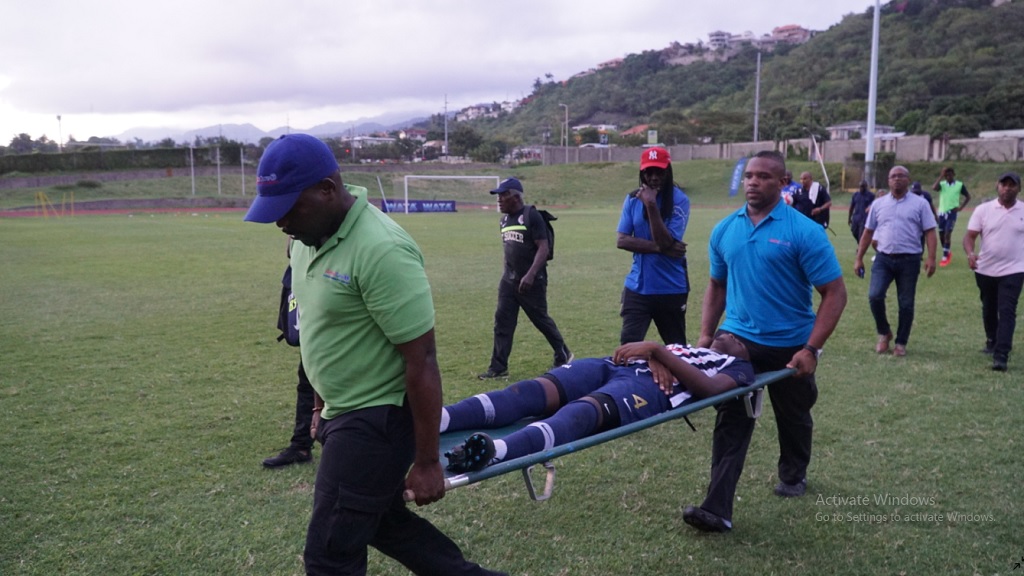 A Jamaica College player is being stretchered off the field after he went down following a lightning strike during the ISSA/Digicel Manning Cup game against Wolmer's Boys at the Stadium East field on Monday, September 16, 2019.

The Inter-Secondary Schools Association (ISSA) is reporting that two Jamaica College (JC) students, who were among several students struck by lightning during an ISSA/Digicel Manning Cup football match at the Stadium East field on Monday, are doing “much better”.

ISSA, in a statement on Tuesday, said it will continue to monitor the progress of the boys and is “praying for their full recovery.’

According to ISSA, about 5:20pm, lightning struck close to where the JC versus Wolmer’s Boys’ School match was taking place, in the 84th minute.

“Several players were affected, two of which, one from Wolmer’s and another from JC, were immediately taken to hospital for treatment,” ISSA said.

ISSA also revealed that the Wolmer’s student was treated and released from the hospital the same day while the JC student was admitted for treatment and observation.

“A second student from Jamaica College, who was not initially taken to hospital, was admitted later that day after complaining of pains. He was subsequently treated,” said ISSA.

It added that both JC students have shown “significant improvement but remain in hospital.”

Two of the affected students were on Monday identified as Terrence Francis of JC, who had to be stretchered off the field and Dwayne Allen of Wolmer’s.

Wolmer's were leading the contest 2-1 at the time of the incident, with approximately six minutes of play remaining