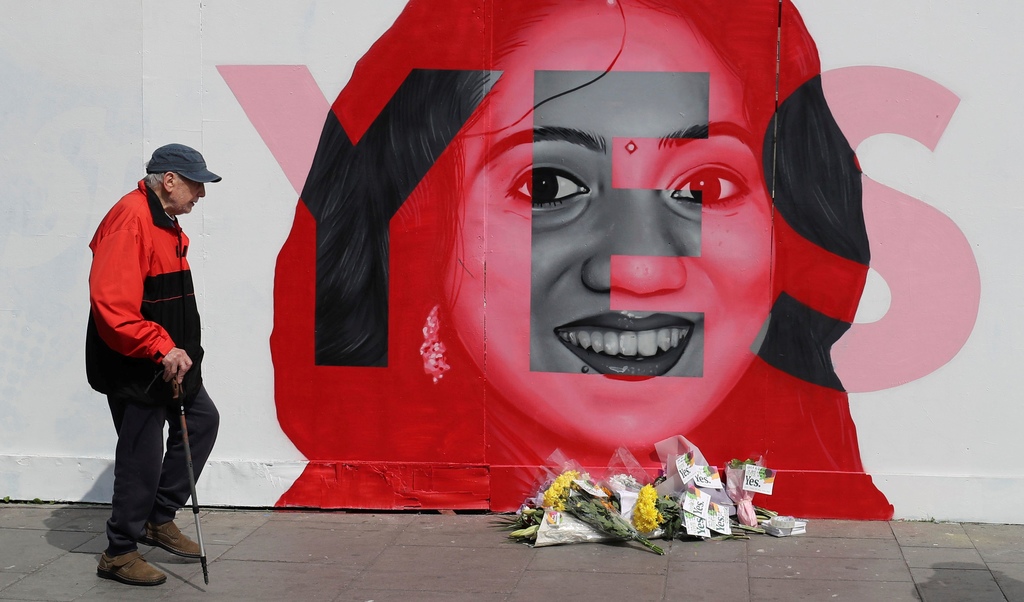 A man walks past a mural showing Savita Halappanavar, a 31-year-old Indian dentist who had sought and been denied an abortion before she died after a miscarriage in a Galway hospital.

A leading anti-abortion group said Saturday that Ireland's historic abortion referendum has resulted in a "tragedy of historic proportions" in a statement that all but admits defeat, as two exit polls predict an overwhelming victory for those seeking to overturn the country's strict ban on terminations.

Official counting for Friday's referendum on whether or not to liberalise Ireland's abortion laws was still underway, and results are not expected until Saturday afternoon. But John McGuirk, spokesman for the Save the 8th group — which refers to the eighth amendment in the constitution which effectively bans terminations — told Irish television Saturday morning that many Irish citizens will not recognise the country they are waking up in.

"You can still passionately believe that the decision of the people is wrong, as I happen to do, and accept it," said McGuirk. "I don't think you'll find many people on our side of the referendum who don't accept the result. That would be wrong."

The Irish Times and RTE television exit polls suggest the Irish people have voted overwhelmingly to repeal a 1983 constitutional amendment that requires authorities to treat a fetus and its mother as equals under the law. Currently, terminations are only allowed when a woman's life is at risk.

If the projected numbers hold up, the referendum would be a landmark in Irish women's fight for abortion rights and a key turning point for a largely Catholic nation that has seen a wave of liberalisation in recent years. It would also likely end the need for thousands of Irish women to travel abroad — mostly to neighbouring Britain — for abortions.

Prime Minister Leo Varadkar, who campaigned for repeal, did not claim victory based on the exit polls but seemed very confident late Friday night.

"Thank you to everyone who voted today. Democracy in action. It's looking like we will make history tomorrow," he said in a tweet after the exit polls were released.

Both exit polls project that the "yes" vote to repeal the ban to be nearly 70 percent. Surprisingly, they also suggest that supporters of more liberal abortion laws may have triumphed throughout the country, not just in the cosmopolitan capital, Dublin, where a strong youth vote had been anticipated.

The RTE exit poll of 3,779 voters predicts support for the "yes" vote in urban areas to be about 72 percent, with rural support at about 63 percent.

It indicates about 72 percent of women voted "yes" along with about 66 percent of men. The strongest backing came from youthful voters — the exit poll says the only age group in which a majority voted "no" were voters who are 65 or older. The poll has a margin of error of 1.6 percent.

The magnitude of the predicted victory exceeds the expectations of abortion rights activists, but a prominent opponent of repeal Cora Sherlock said the exit polls, if accurate, "paint a very sad state of affairs."

She said the "pro-life movement will rise to any challenge it faces" and resist what she called the trend toward abortion on demand.

If the "yes" forces seeking a constitutional change prevail, Ireland's parliament will be charged with coming up with new abortion laws.

The government proposes to allow abortion in the first 12 weeks of pregnancy with later terminations allowed in some cases.

If confirmed by the official tally, the large margin of victory predicted by the exit polls would greatly strengthen the government's hand when dealing with abortion opponents in parliament.