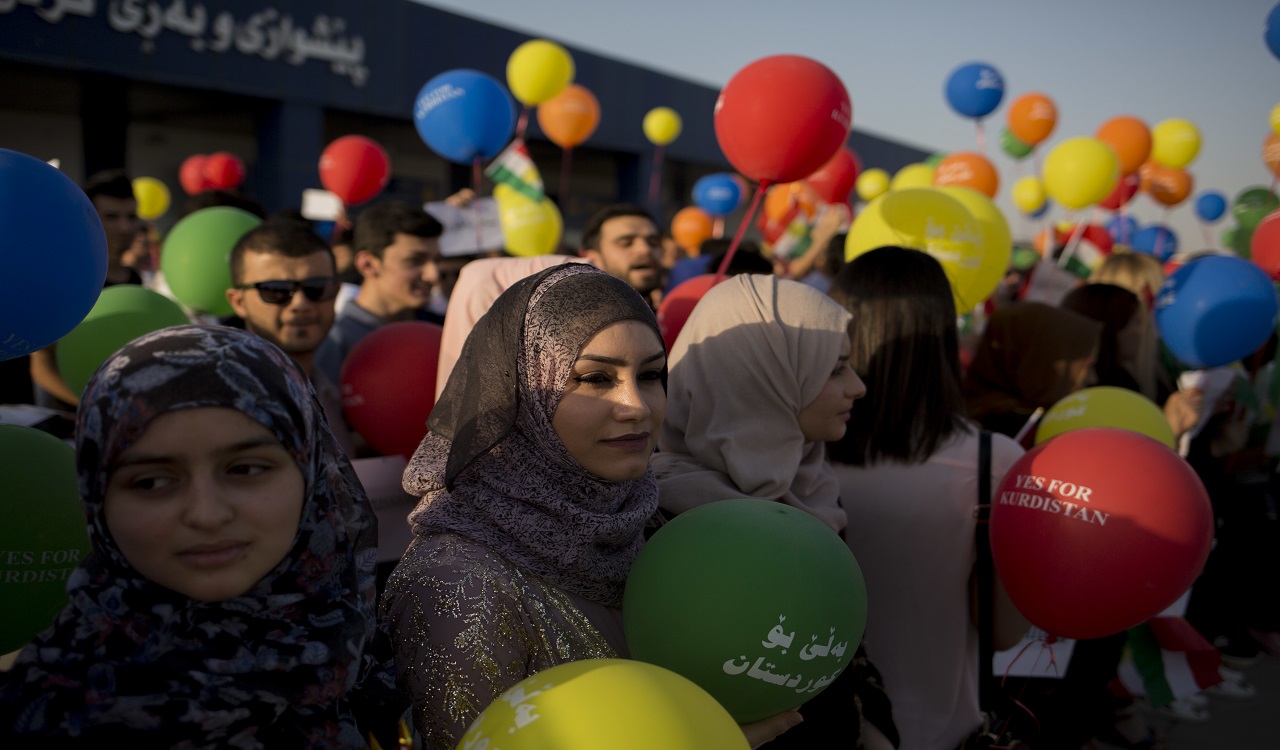 Kurdish women hold balloons to protest against the flight ban issued by the Iraq federal government outside the Irbil International Airport in Iraq, Friday, Sept. 29, 2017.

Iraq's military was preparing to take control of the international borders of the northern Kurdish region as a flight ban halted all international flights from servicing the territory's airports on Friday, as the central government in Baghdad stepped up moves to isolate the Kurds following their vote on independence earlier this week.

Iraqi troops now in Turkey and Iran would start on Saturday morning to enforce control over the border crossings out of the Kurdish region, Iraqi officials told The Associated Press. They will not enter the Kurdish region, but instead Iraqi customs administrators backed by the troops will set up control points just outside the Kurdish border stations, the officials said.

The step will be the first movement of troops — outside of joint military exercises held by Turkey, Iran and Iraq — in response to this week's referendum in which Kurds voted by more than 90 percent to back independence from Iraq for their self-rule zone and other areas they have captured the past year.

The escalation feeds worries in the United States, a close ally of both the Kurds and Baghdad, that the referendum vote could lead to violence, setting off an unpredictable chain of events.

Two U.S. officials said Washington was concerned about possible operations involving Iraqi, Iranian or Turkish forces, or a combination thereof. Behind the scenes, the United States has strongly been advising against any military incursion into the Kurdish region, and believes none of the players will do so, according the officials, who spoke on condition of anonymity because they weren't authorized to speak publicly on the matter.

The nonbinding referendum — in which the Kurds voted overwhelmingly in favor of independence from Iraq — will not immediately result in independence. But Kurdish leaders have said they will use it to press for negotiations on eventually forming their own state.

That has set off alarm bells in Baghdad, where the government has said it is determined to prevent a break-up of the country, and in Iraq's neighbors, Iran and Turkey, which fear the vote will fuel similar ambitions among their own significant Kurdish populations.

So they have moved to isolate the region. Iran on Friday announced a ban on oil imports and exports with the Iraqi Kurdish region, the state news agency announced.

At Irbil International airport, hundreds of passengers lined up for flights out of the Kurdish region in the hours before the central government's flight ban took effect Friday evening. Baghdad had demanded the region hand over the airport to its authority or else face a ban.

Talar Saleh, the general director of Irbil International Airport, says Kurdish authorities had attempted to meet with officials from the central government to comply with the demand. But "so far, up to this moment, there is no reply from Baghdad," she said at a press conference held at the airport.

Many of the hundreds of people traveling Friday afternoon were foreigners ordered to leave the region by the companies they work for.

"Of course we don't want to leave," said Joao Gabriel Villar, a Brazilian doctor working for a non-governmental organization that helps people displaced by the conflict with the Islamic State group.

"We had only just arrived," he said. "We could have helped many more people if we stayed."

"Central government control of air and land ports in the Kurdistan region is not meant to starve, besiege and prevent (the delivery of) supplies to the citizens in the region as alleged by some Kurdistan region officials," he said in a statement from his office.

Similarly, Baghdad's move to control the borders did not so far mean closing them. At crossings into Turkey and ran, Iraqi border officials backed by Iraqi troops would set up stations facing the Kurdish-run border stations inside the self-rule territory — presumably either in no-man's-land or in Turkish and Iranian territory.

That way all traffic passing back and forth would have to go through them. The officials could also collect customs duties and taxes from those crossing. Doing so avoids direct confrontation with Kurdish forces over control while making a demonstration of central government authority.

Plans for the border move were confirmed by three Iraqi officials, speaking on condition of anonymity because they were not authorized to talk about the plans.

U.S.-led coalition spokesman Col. Ryan Dillon told reporters at the Pentagon on Thursday the Kurdish independence vote has diminished the military's focus on fighting IS.

"The focus, which used to be like a laser beam on (IS), is now not 100 percent there. So there has been an effect on the overall mission to defeat (IS) in Iraq as a result of the referendum."

The loss of focus, Dillon said, is "across the board," including Iraqi security forces, Kurdish fighters, known as the peshmerga, and U.S. military planners and advisers.

U.S. military planners have had to spend time to "play out the what-ifs" resulting from assessing the political and military implications of the referendum, he said.

At Friday prayers from the holy city of Karbala, Iraq's top Shiite cleric issued his first comments following the referendum, warning the Kurdish vote will lead to internal and external reactions, in comments read by cleric Ahmad al-Safi.

The fallout will have consequences on our "dear Kurdish citizens and could have more dangerous repercussions," Grand Ayatollah Ali al-Sistani said.

One U.S. official said the Kurdish referendum is likely to severely set back hopes for Kurdish independence. Perhaps, indefinitely.

The prevailing international understanding was Kurdish independence was only a matter of time, said the official. Now, the Kurds face potentially hostile actors on their borders and nations around the world determined to prevent a declaration of Kurdish independence — and the larger crisis that would risk triggering.