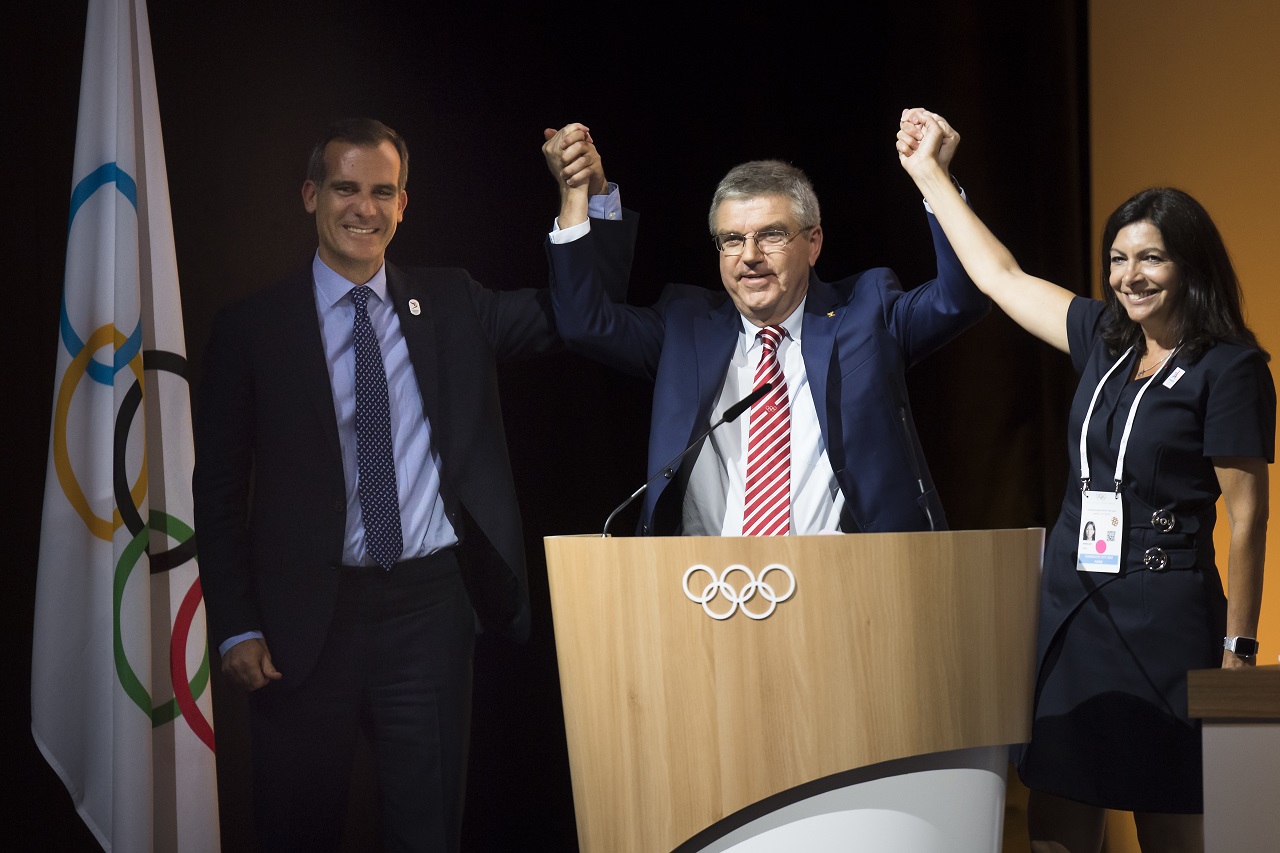 Los Angeles and Paris can agree a deal to be named Olympic host cities in September, after the IOC decided Tuesday it can award both the 2024 and 2028 Summer Games rights at the same time.

International Olympic Committee members voted unanimously to seek a consensus three-way deal between the two bid cities and the IOC executive board. Talks will open with Paris widely seen as the favorite for 2024.

If a deal falls through, only the 2024 hosting rights will be voted on when the IOC next meets, on Sept. 13 in Lima, Peru.

However, an agreement seemed assured by the reaction of the two mayors. Eric Garcetti of LA and Anne Hidalgo of Paris emerged on stage holding hands to welcome the decision.

A deal is also likely because a head-to-head fight for 2024 would create a loser that is unlikely to return four years later for a new 2028 bid contest.

"Both of us will find it more and more difficult to convince cities — whether it's Paris, Los Angeles or other American cities — to really go into this process if one of us gets turned down," Garcetti had said earlier Tuesday.

The mayors were united on stage by IOC President Thomas Bach, who raised an arm of each in a shared gesture of triumph.

A deal to make both cities winners would fulfil a strategy that Bach set in motion last December to help safeguard a stable future for the signature Olympic event.

"With Los Angeles and Paris, there are two fantastic cities from countries with a profound Olympic history," Bach said.

The IOC approved the expected double award after hearing both cities present their 2024 hosting plans at a conference center in the Olympics' capital city, Lausanne.

Both cities used 45 minutes of videos and speeches, including one with French President Emmanuel Macron promoting the Paris cause, in a closed-door session with IOC members to explain how they would host the 2024 Olympics.

At separate news conferences, the mayors said they could work toward a deal.

"We look forward to working together, maybe not in competition but collaboration with Paris," LA's Garcetti said after his city's bid officials opened the campaign event.

Garcetti and Hidalgo have long touted their good relations on other issues such as climate change.

"We are all at the disposition and by the side of the IOC which was right to ask itself this question," Hidalgo said at the Paris news conference, citing her friendship with Garcetti as potentially a "key element."

The dual award can give the IOC a decade of stability with two world-class cities touting financially secure bids. LA plans to use only existing venues with zero risk of white elephants. This follows years of overspending by Olympic hosts and a series of political defeats that have sunk the campaigns of potential candidates.

It also avoids inflicting a third recent defeat on Paris — which lost with bids for the 2008 and 2012 Olympics — and the United States. New York and Chicago both lost heavily for 2012 and 2016, respectively.

Those losses deepened a rift between the U.S. Olympic Committee and the Swiss-based IOC that LA 2024 and a new team of American officials have worked hard to heal.

Paris also failed with a 1992 bid and pinned its hopes on hosting in 2024, exactly 100 years after its previous Summer Games.

"We lost three times, we don't want to lose a fourth one," Macron said at the news conference. "I'm here to convey the message that there's a strong unity to back this candidacy."

The IOC's most valuable TV rights deal is with NBC and several of its top-tier sponsors are American.

Still, a 2028 Olympics in Southern California could be the first American-hosted games since 1996 in Atlanta.

Bach has said the idea of a double award was presented to him at a lunch last year by friends whom he declined to identify in a recent interview with French sports daily L'Equipe.

The LA bid team declined to comment Tuesday whether the suggestion came from its supporters, as some believe.