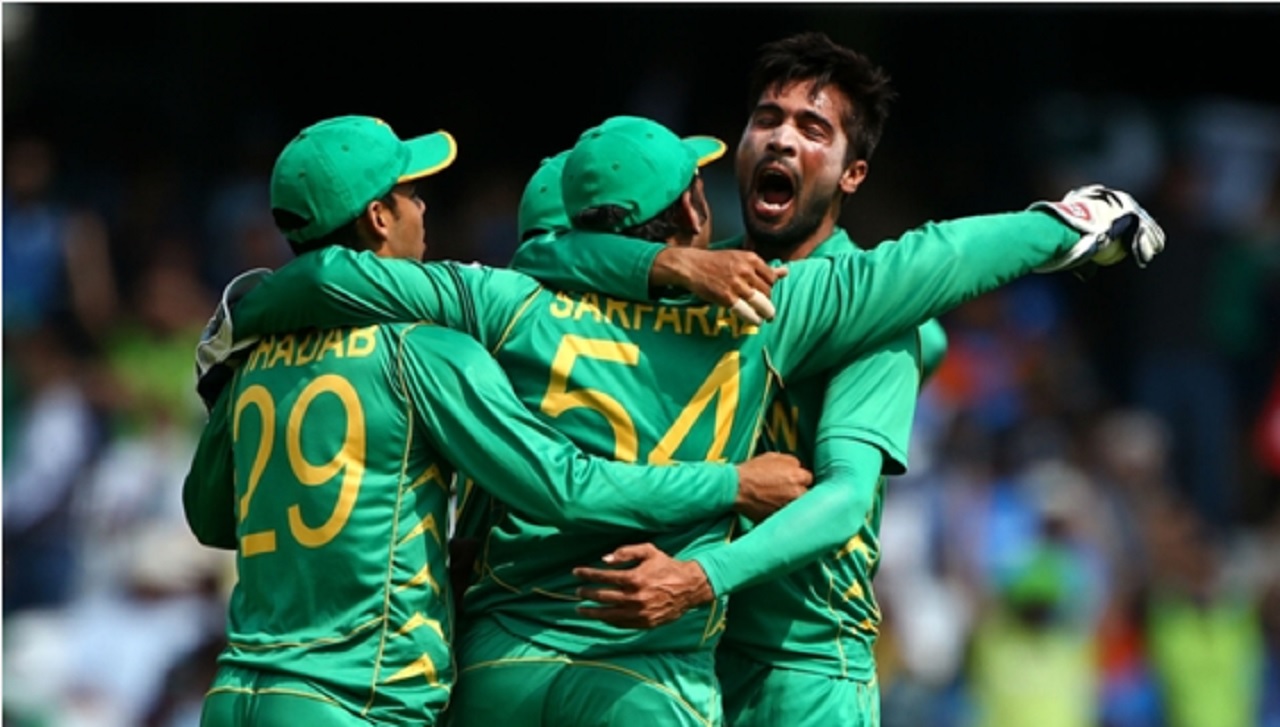 Mohammad Amir celebrates a wicket with his Pakistan team-mates.

Fakhar Zaman and Mohammad Amir starred as Pakistan completed a remarkable turnaround at the ICC Champions Trophy on Sunday, winning the global 50-over tournament for the first time courtesy of a hugely convincing 180-run victory over great rivals India at The Oval.

A fortnight on from being thrashed by India in their opening group match at Edgbaston, Mickey Arthur's side looked a totally different team as they followed up their semi-final hammering of hosts England by trouncing the defending champions.

Pakistan's formidable total of 338-4 - the highest score of the event - owed much to Fakhar, who took full advantage of being caught off a Jasprit Bumrah no-ball on three by compiling a flamboyant 114, his maiden One-Day International hundred.

Azhar Ali (59), Babar Azam (46) and Mohammad Hafeez (57 not out from 37 balls) also made significant contributions as India's frontline bowlers - with the exception of the impressive Bhuvneshwar Kumar - were put to the sword.

When the fit-again Amir, who missed his side's semi-final win due to a back spasm, removed India's dangerous top three in a magnificent opening spell, Pakistan were in complete command.

There was to be no way back for India, who subsequently slumped to 72-6 and only made it to 158 thanks to a stunning, 43-ball 76 from Hardik Pandya.

Fakhar was called up to make his debut versus South Africa following Pakistan's heavy defeat to India on June 4 and made fifties against Sri Lanka and England before reaching new heights on Sunday.

After India elected to bowl first, Fakhar led a charmed life early on. Either side of his fortuitous reprieve when Bumrah over-stepped, he was almost run out and struck on the helmet before reaching double figures.

However, it was not long before the opener found his feet and things looked rosy for Pakistan as Azhar and Fakhar brought up their respective fifties from successive balls in the 20th over.

Although Fakhar was guilty of ball-watching when Azhar was run out, the left-hander swiftly made amends, adopting a particularly aggressive approach against spinners Ravichandran Ashwin and Ravindra Jadeja as he dashed from 50 to 100 in just 32 balls.

A wild swipe at Pandya eventually brought an end to Fakhar's thrilling 106-ball knock, but Babar and Hafeez built on the fine platform that had been set, the latter hitting three sixes in a wonderful late cameo.

The ever-dangerous Amir was the next man to take centre stage, trapping Rohit Sharma lbw for nought in the first over of the reply and then having Virat Kohli (5) caught at backward point one ball after India's captain had been put down by Azhar at first slip.

Amir also had Shikhar Dhawan (21) caught behind with a cross-seam delivery, teenage leg-spinner Shadab Khan trapped Yuvraj Singh (22) lbw on review and India were doomed when MS Dhoni (4) was caught on the pull for four off Hasan Ali - the tournament's leading wicket-taker.

Pandya did his best to rescue a hopeless situation, thumping Shadab for three successive maximums and a four in the 23rd over as he raced past 50 in just 32 deliveries.

The powerful all-rounder also hit Fakhar for back-to-back sixes, but a mix-up between the wickets with Jadeja cut short the most absorbing of counter-attacks and the end was not long in coming thereafter.