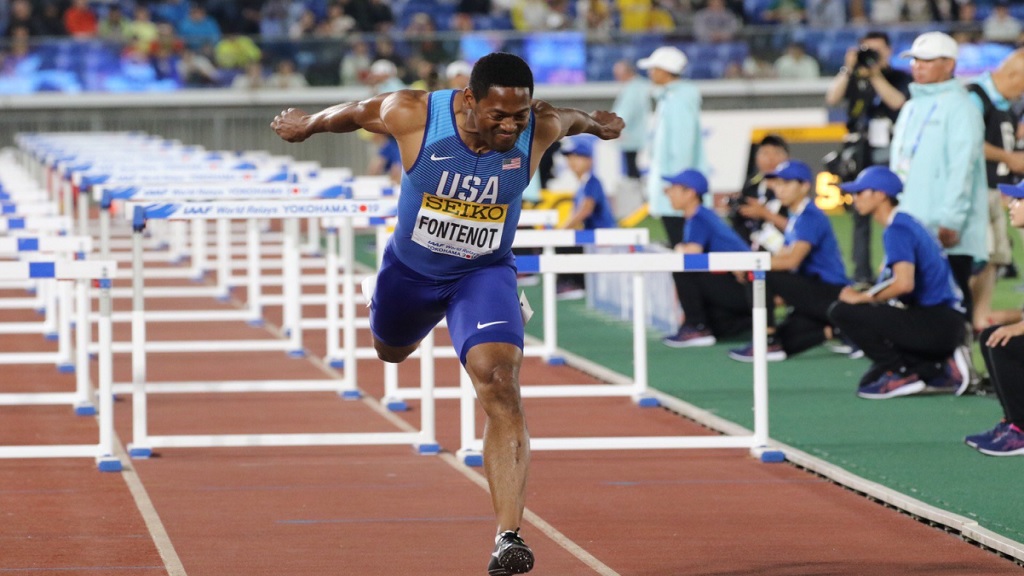 Injuries to Andrew Riley and his replacement denied Jamaica their spot in the final of the historic mixed shuttle hurdles relay on the opening day of the IAAF World Relays Yokohama 2019 on Saturday.

Competing before an appreciative crowd of more than 15,000 at the Yokohama International Stadium, the team of Amoi Brown, Riley, Megan Tapper, and Ronald Levy had booked their spot in the final earlier after winning the first of two heats in 55.47,  the second fastest qualifying time.

However, Riley came out of the race with a hamstring injury and the replacement athlete Norman Pittersgill reportedly picked up an injury just ahead of the final.

The final turned out to be just a two-team race as a false start by leadoff Brianna Beahan left Australia out of the running before they even began.

That left only the US and Japan to vie for the inaugural title, with Asian champion Ayako Kimura lining up against world indoor silver medallist Christina Clemons. Energised by the vocal crowd, Kimura got Japan off to a sold start, beating Clemons, who was running with red chopsticks in her hair, to the first exchange by about two metres.

Running back towards the finish, Shunya Takayama extended the host’s lead, but that would-be challenge came to an abrupt end midway through leg three when Sharika Nelvis powered by Masumi Aoki with anchor Devon Allen patiently looking on. The Rio Olympic finalist then took command, extending the lead en route to a 54.96 performance to secure the US$50,000 first place prize for his team, more than half a second ahead of Japan, who collected $30,000.

The mixed shuttle hurdles relay is one of two new disciplines making their debut at the IAAF World Relays.

As the name suggests, it features two men and two women on each team, running 110m legs. The race began with the women running their standard 100m hurdles race from the finish line towards the traditional start, but running an extra 10m at the end of their leg to account for the extra distance.

The day turned out to be a fairly decent one for Jamaica as the country qualified teams to five of the six events it competed in on the day.

Jamaica's women's 4x400m relay team crossed the line in third place in heat three but was promoted to second following the disqualification the winner Ukraine.

In the men's 4x400m relay, Jamaica finished second behind the United States in heat 1 to qualify for the final.

Trinidad and Tobago, which won heat 3 in 3:02.49, have the second fastest qualifying time.

In the women's 4x100m relay, Jamaica with Sherone Simpson, Natasha Morrison, Sashalee Forbes, and Jonielle Smith finished second behind Germany in heat 3 to qualify for the final.

Germany clocked 43.03 seconds for the victory, just ahead of Jamaica with 43.08.

Quickest in the heats was the United States, which clocked 42.51 seconds in the first of three heats, more than half a second faster than the second fastest qualifier Germany.

In the men's 4x100m, Jamaica's quartet of Nesta Carter, Julian Forte, Rasheed Dwyer, and Tyquendo Tracey squeezed into the final with a 38.51 clocking for third place behind Great Britain (a world-leading 38.11) and Brazil (38.22) in heat 1.

The US squad won their heat in 38.34, but they left the stadium as just the fourth fastest of the opening round, setting up a final that appears wide open.

Jamaica's 38.51 clocking represents the slowest of the eight qualifiers.

Jamaica failed to advance out of the opening round of the mixed 4x400m relay. The quartet of Fitzroy Dunkley, Janieve Russell, Ronda Whyte, and Jamari Rose could only manage third place in 3:18.47, behind Belgium (3:18.03) and Brazil (3:18.26) in the first heat.

Sunday's final days is scheduled to start at 4:31 am Jamaica time with the heats of the men's 4x200m relay.