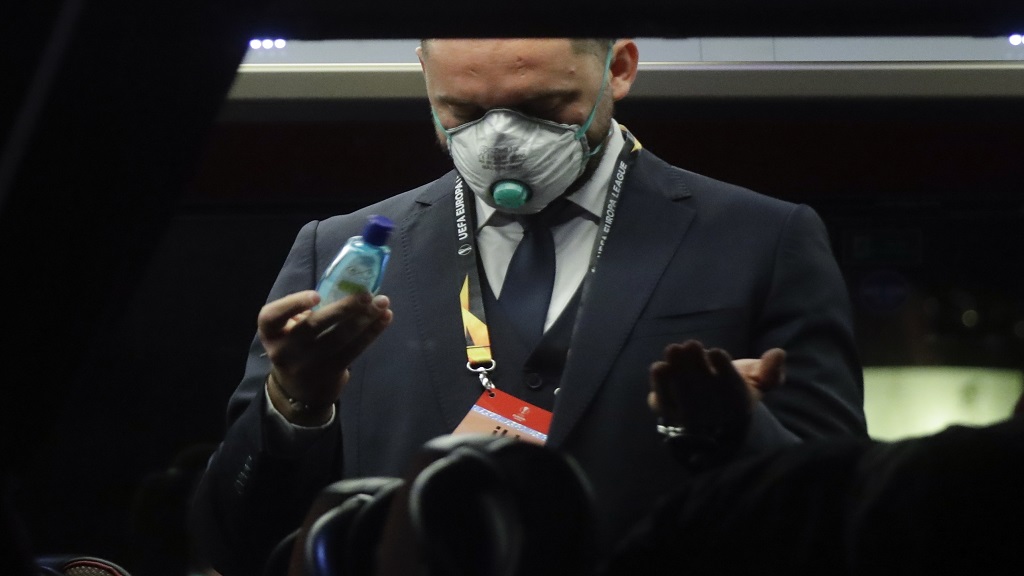 For the second successive weekend, some matches in Italy — including one between title rivals Juventus and Inter Milan — will be played in empty stadiums in a bid to stop the virus spreading.

“I don't think it is sustainable in the long term to play behind closed doors,” Infantino said ahead of a meeting of football's lawmakers in Northern Ireland. "Every competition organiser ultimately has to decide what is best for him.

“Obviously, on the short term it can be a solution (to play without fans) in order to move on. But you cannot imagine a few months of a competition being played, several matches being played, behind closed doors.”

The next set of international men's fixtures are in March, including Italy playing a friendly in England. Italy's rugby games in Ireland that were scheduled for next weekend have already been called off after a request from the Dublin government.

“I wouldn’t exclude anything at this moment,” Infantino said when asked if the March international games can be played. “I hope we will never have to get into this direction. ... We cannot underestimate and say it’s nothing but we don’t have to overreact and panic. We have to follow the instructions given by the authorities."

For now, games will go on in the world's most lucrative and watched football league, but English Premier League clubs are wary of the COVID-19 virus.

Newcastle manager Steve Bruce said on Friday his players were no longer greeting each other with handshakes at the training ground, under medical advice.

Journalists heading to Arsenal for a pre-match news conference with manager Mikel Arteta on Saturday have been told to complete a questionnaire about their recent whereabouts before attending.

Posters have been put up across football stadiums and training centers, informing players and fans of the guidance coming from Britain’s top health officials.

As it stands, though, the Premier League will go ahead as planned this weekend, saying it will follow advice from the government and not act unilaterally in response to the outbreak.

“We're glued to the TV for where it's going to go next,” Bruce said, “and let's hope it doesn't get any worse in this country.”

Premier League clubs are following the same medical guidelines as other businesses and venues used by large numbers of people, but there is currently no suggestion they should be taking extra measures while the virus spreads.

Liverpool manager Jurgen Klopp said his club was acting like it would if there was an outbreak of flu.

“We take it really seriously but we cannot avoid everything,” said Klopp, whose team leads the Premier League by 22 points and plays away to Watford on Saturday. “In the end, nobody tells us that we cannot play football. So as long as that doesn’t happen, we will play football.”

The latest figures reported by Britain's health authority shows there are 19 cases in the country. In total, 57 countries have been hit by the illness and there has been an inevitable impact on sports.

Switzerland’s football league has postponed all games in the top two divisions this weekend after a federal order that will see all events involving more than 1,000 people banned until mid-March.

The Spanish league said it has not considered suspending Sunday’s clásico between Real Madrid and Barcelona but has a contingency plan in place for the outbreak of the virus, including playing matches in empty stadiums.

Javier Tebas, the president of the league, said local officials would ultimately decide whether games can be played, and the league’s first option would be to play them without fans to avoid scheduling problems later. The league does not rule out having games postponed, though.

On Friday, Valencia said players and coaches will not speak in news conferences before or after games because a journalist who covers the club was found to have been infected with the virus after the team’s Champions League match against Atalanta in Milan last week.

The club said players also will not speak to reporters after matches, and will not be involved in any other public activity besides the games. It said the measures would prevent players and coaches from being at a greater risk of being infected.

Valencia said it was following authorities’ recommendations after the disclosure of cases of the virus in Valencia. It said the cancellations would stay in place until further notice.

FIFPro, the world players' union, said on Friday it was concerned about the “danger of football acting as a vehicle to spread disease” and was worried for its members.

“Players have contacted our member unions asking for assistance out of fear they could be made to perform in high-risk environments,” the union said in a statement, adding it was in talks with stakeholders in the sport to address the rescheduling of international dates, including qualifying matches for the 2022 World Cup.

"While we understand the inconvenience this causes worldwide, the COVID-19 outbreak is bigger than football, and we applaud the willingness of competition organisers to take firm action in this delicate period," FIFPro said.

In gymnastics, world all-around champion Nikita Nagornyy wrote on Instagram that the Russia team has decided to skip the American Cup in Milwaukee on March 7 “due to the escalation of coronavirus in the world.” Russia was also expected to enter Lilia Akhaimova in the women’s events.

England's football authorities, however, are happy to keep monitoring the situation.

There are eight Premier League matches scheduled in England this weekend, as well as the League Cup final between Manchester City and Aston Villa at Wembley Stadium on Sunday.

City manager Pep Guardiola wasn't getting too hung up on the virus.

“We are shaking hands," Guardiola said when asked if his club was taking any special precautions, "(and) I love to hug.

Tokyo, IOC officials reiterate that the Olympics are on