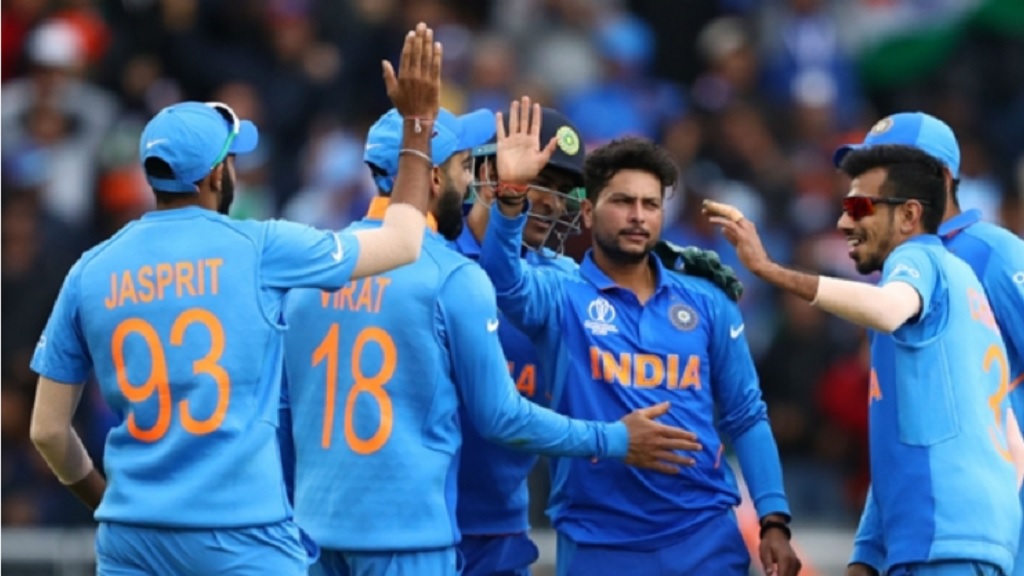 India celebrate a wicket against Pakistan.

India will be without Shikhar Dhawan and Bhuvneshwar Kumar as they look to continue a near-perfect start to the Cricket World Cup against winless Afghanistan on Saturday.

Opener Dhawan has been ruled out for the rest of the World Cup with a fractured thumb suffered while scoring a century against Australia in a 36-run win.

Rishabh Pant has been called up to take Dhawan's place, but India hope they will have Bhuvneshwar for the business end of the tournament, the fast bowler having been ruled out for two-to-three matches with a hamstring injury sustained against Pakistan.

Even without Dhawan and Bhuvneshwar, India will be expected to triumph by a wide margin in the first World Cup meeting between these sides.

Rohit Sharma and Virat Kohli have been in typically brilliant form and should relish facing an Afghanistan attack against which Eoin Morgan hit an ODI-record 17 sixes, with Rashid Khan (0-110) posting the tournament's worst ever bowling figures as England breezed to a 150-run win in which their 25 team maximums also marked a format best.

India's attack should also have plenty of confidence of success against an Afghanistan batting line-up for whom a score of a 247-8 in a futile chase of England's 397-6 represented their highest in a World Cup.

Afghanistan's always slim semi-final hopes are effectively gone and they will be officially out with a defeat but, if they somehow turn the tables on India at the Rose Bowl, it will be among the biggest shocks in World Cup history.

The only blemish on India's faultless campaign to this point came when they and New Zealand were frustrated by the elements. Either side of that washout the world's second-ranked side have been dominant, claiming comfortable wins over South Africa and Australia before crushing arch rivals Pakistan at Old Trafford.

There could hardly be a greater contrast between their success and Afghanistan's performance at the tournament. While Afghanistan were not seen as realistic challengers for the semi-finals, more competitive displays than they have produced in heavy defeats to Australia, Sri Lanka, New Zealand, South Africa and England were expected. The tournament minnows need to salvage some pride before their competition ends.

India bowler Jasprit Bumrah: "We've got a lot of faith in ourselves, we've got a good balance. We are not worried about the changes. The people who come in as replacements are also equally good and they can take care of the situations."

Afghanistan's Rashid Khan: "I am not thinking too much about that match [against England]. People forget 10 good days and conveniently remember that one particular bad day. They don't like to remember what Rashid did on [the] previous 10 days."

- India come into this match having registered victories in 14 of their last 15 World Cup matches; a 95-run loss to Australia in the 2015 tournament being the only blip in that run.
- Rohit Sharma has registered scores of 140, 57 and 122 not out in his three knocks at the 2019 World Cup. Overall he has averaged 72 across his 11 knocks in World Cup matches, the best rate of any India player to record more than two innings in the competition's history.
- Ten different players have hit a maximum for Afghanistan at the 2019 World Cup, no other team have as many players to hit a six so far.
- Virat Kohli (764) requires 97 to move into third spot on the list for most World Cup runs for India, he would leapfrog Mohammad Azharuddin (826), Virender Sehwag (843) and Rahul Dravid (860). Kohli has scored more ODI runs than any other batsman in the world since the start of 2016 (4,189), averaging 83.8 across those 64 knocks in that time.