India on brink of victory after brilliant Bumrah halts Buttler 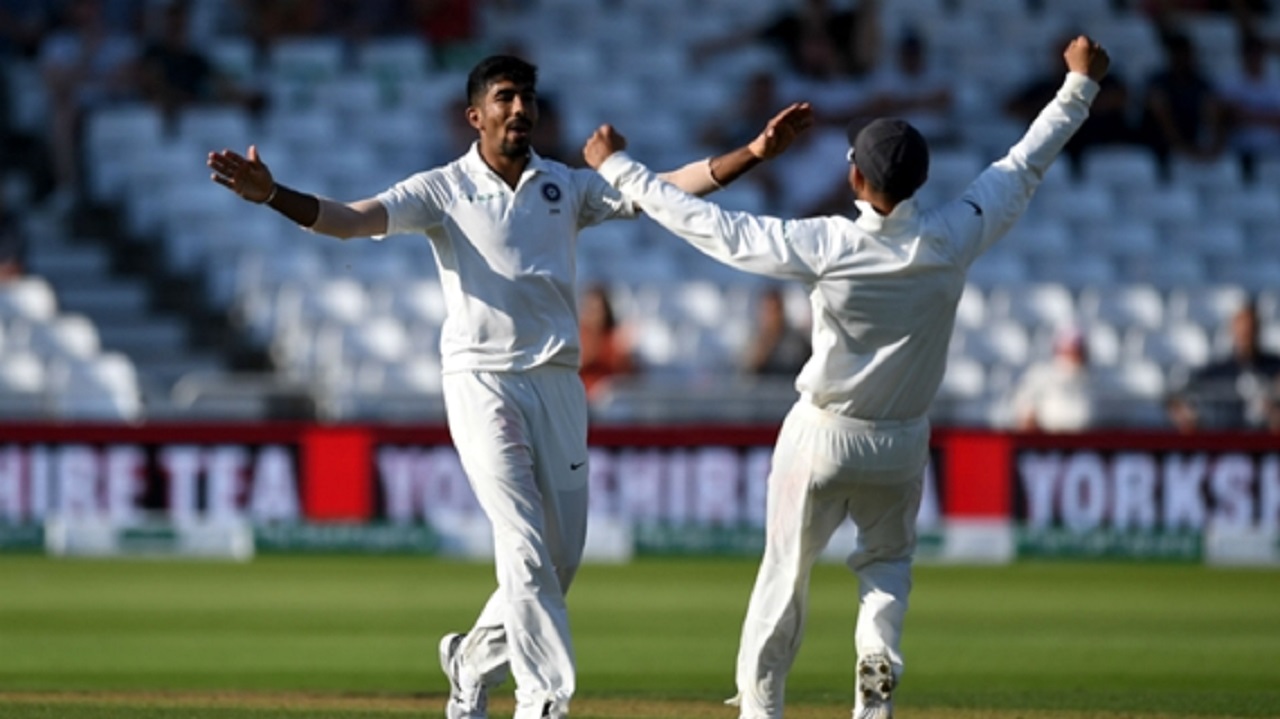 England scraped to a fifth day after Jasprit Bumrah and a new ball inspired their collapse to edge India towards victory in the third Test at Trent Bridge on Tuesday.

After a strong start from the tourists, who pounced to catch four edges before lunch, a partnership of 169 between Ben Stokes (62) and Jos Buttler (106) - recording his first Test hundred - ate into India's 520-run lead and threatened to bring England back into contention.

But with Stokes and Buttler moving up the order in light of Jonny Bairstow's fractured finger, the conclusion of their fifth-wicket stand soon brought the innings crashing down in Nottingham with England closing the day on 311 for nine chasing and requiring 210 runs to win.

Bairstow went for a golden duck as a rampant spell of bowling saw Bumrah (5-85) to the fore, fit again after missing the first two matches and thriving with the new ball after tea to move India to the brink.

Adil Rashid (30) and James Anderson (8) at least saw England take it to the final day, but India's advantage stands at a daunting 209 runs heading into Wednesday's, with just one home wicket remaining.

Requiring 498 runs to win at the start of play, England's desired strong start was not forthcoming as Ishant Sharma (2-70) quickly mopped up openers Keaton Jennings (13) and Alastair Cook (17).

Captain Joe Root (13) and Ollie Pope (16) briefly regained a measure of composure at the crease, but another pair of edges - to Bumrah and Mohammed Shami - resulted in their departures in quick succession, with Virat Kohli catching superbly from the latter.

England saw out the morning session without sustaining further damage as an outstretched Rishabh Pant dropped Buttler on one after a misstep, an error that would prove costly after lunch.

India's momentum waned and Stokes survived an lbw review shortly before Buttler brought up his half-century and their much-needed partnership then reached three figures.

The batting pair kept chipping away and a slow Stokes 50 came as England passed 200 following tea, before Buttler ended his wait for a Test century with his 21st boundary of a brilliant knock.

But a new ball arrived after the 80th over of the innings and immediately caused problems, with Buttler gone lbw to Bumrah after a leave.

That dismissal forced the ailing Bairstow to belatedly take to the crease, but his finger was not troubled as Bumrah crashed into off stump first ball to give England's innings a very different complexion.

Although Chris Woakes (4) denied the hat-trick with a four, Bumrah soon got his man and Stokes followed, his 187-ball shift ended with a leading edge to KL Rahul at second slip off Hardik Pandya's bowling.

A no ball initially denied Bumrah his five-for and handed Rashid a let-off, but he delighted in removing Stuart Broad (20) as news broke that the England man would be fined for sending off Pant on day two, with the hosts then battling through to the close of play, delaying the seemingly inevitable.

England vs India: Kohli tempted by two spinners at Lord's