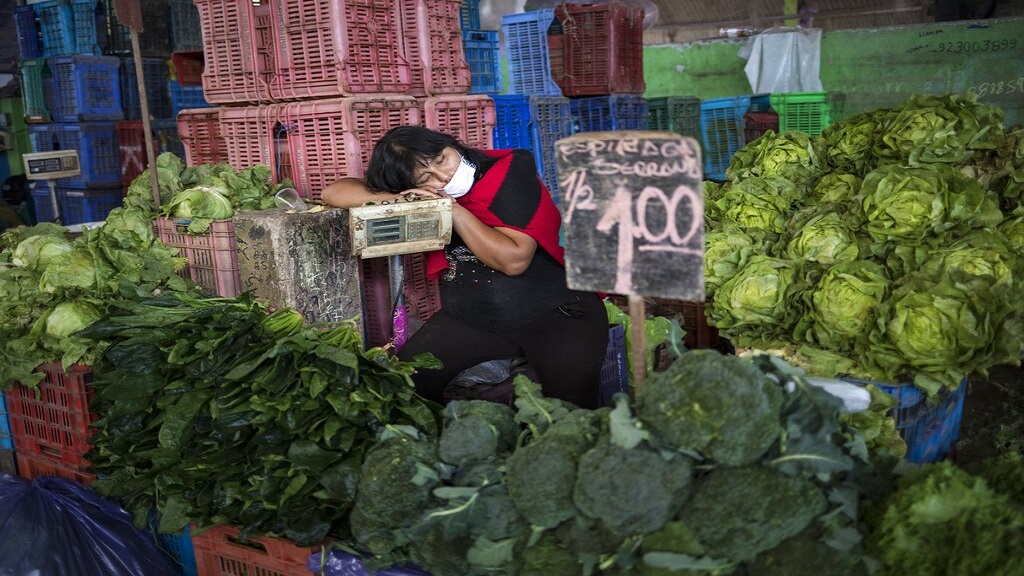 Kathy Velazquez, wearing a protective face mask as a precaution against the new coronavirus, naps in her vegetable stall as she waits for customers in Lima, Peru, Saturday, April 11, 2020. (AP Photo/Rodrigo Abd)

The International Monetary Fund (IMF) on Tuesday forecast the economy of Latin America and the Caribbean will contract 5.2 per cent in 2020 as activity grinds to a halt due to the spread of the new coronavirus.

A recession of that magnitude would be the worst since at least 1980, the first year in the IMF's World Economic Outlook database.

For comparison, the global financial crisis caused a regional recession in 2009 that was less than half as deep as the one the IMF predicts for this year.

The IMF report follows estimates by the World Bank of a 4.6 per cent contraction for the region this year. The UN’s Economic Commission for Latin America and the Caribbean projected economic activity would fall by 1.8 per cent to four per cent.

The IMF's forecast includes a 5.3 per cent plunge in Brazil. That would be the deepest single-year tumble since at least 1901, when national accounts data from the government's economics institute begin. Brazil contracted two per cent in 1918, the year of the Spanish flu pandemic, according to the institute.

The IMF’s 6.6 per cent contraction forecast for Mexico is the worst among major countries in the region except for Venezuela, which was already in the throes of a multi-year depression before the onset of the pandemic. That would be an even poorer result for Mexico than 1995, the year of the peso crisis that followed sudden currency devaluation.

In its report, the IMF concedes there is “extreme uncertainty” around its outlook for global growth, which could be the biggest contraction since the Great Depression of the 1930s, and says exact fallout depends on difficult-to-predict factors including the path of the pandemic's spread, the efficacy of containment efforts, the extent of supply disruptions, tightening in global financial conditions and shifts in consumers' behaviour.

Ecuador will also be particularly hard hit, with a decline of 6.3 per cent, the multilateral lender said in its report.