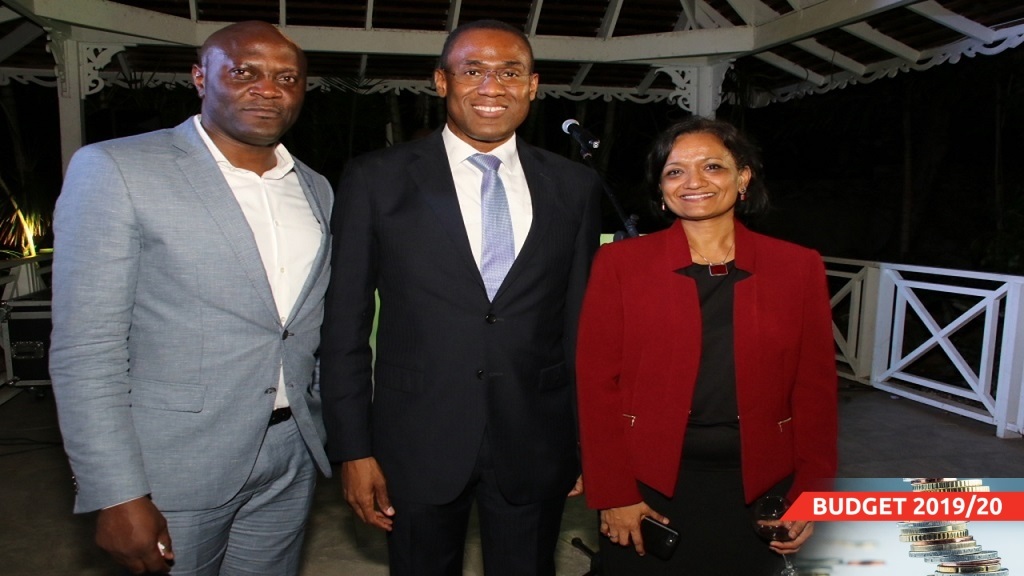 From left to right: Dr Constant Lonkeng Ngouana, IMF Resident Representative in Jamaica; Finance Minister Dr Nigel Clarke and IMF Chief Mission for Jamaica Uma Ramakrishnan at a post-budget lyme on Thursday. A team from the IMF visited Jamaica to conduct discussions on the fifth review of the island's economic programme.

The International Monetary Fund (IMF) has given its ringing endorsement of the government’s $14 billion tax cut package that was announced on Thursday by Finance and Public Service Minister Dr Nigel Clarke.

The endorsement is contained in a statement issued by Uma Ramakrishnan, who headed the IMF team that visited Jamaica from February 25-March 8 to conduct discussions on the fifth review of Jamaica’s financial and economic programme that is supported by the IMF’s precautionary Stand-By Agreement (SBA).

All quantitative performance criteria at the end of December 2018 were met, the IMF team said. Consideration by the IMF’s Executive Board is tentatively scheduled for April 2019.

Ramakrishnan said the IMF supports the reduction in the primary surplus target by 0.5 per cent of GDP to 6½ per cent to facilitate higher spending in social assistance, citizen security and rural infrastructure in the 2019/2020 Budget.

It is that half a percentage point reduction in the primary surplus target that has freed up approximately $11 billion of the $14 billion that has allowed the government to abolish some taxes and reduce others.

“These tax cuts are feasible because of the expanded tax base that has been achieved through commendable efforts in both tax policy and revenue administration. Overall, these budget measures are expected to lower the cost of doing business, reduce informality and increase economic activity,” said a statement issued by Ramakrishnan.

“The reductions in the highly distortive financial turnover taxes …are expected to lower the cost of doing business, reduce informality and increase economic activity,” the IMF statement added.

The fund noted that tackling governance issues swiftly and forcefully was necessary to enhance transparency and accountability, bolster trust in public institutions, and protect public funds.

And while the IMF said an additional US$224 million is available to Jamaica under the SBA thus bringing the total available amount under the SBA to US$1.4 billion, it noted that the arrangement which ends later this year is precautionary.

The IMF also noted that “strong implementation of the reform programme continues, with the sustained commitment yielding tangible dividends for the people of Jamaica.

“Unemployment is near all-time lows, business confidence is high, and the economy is estimated to have expanded by 1.8 per cent in 2018, buoyed by mining, construction and agriculture.”

The multilateral also pointed out that international reserves are estimated to be comfortable under a more flexible exchange rate. And the IMF acknowledged the steps being taken to make the Bank of Jamaica a fully independent institution.

“Looking ahead, accelerating public sector reforms, including a new compensation framework that rewards performance and the rationalization of the numbers of public bodies by prioritizing government functions, will improve public service delivery.

“This will further reduce the wage bill and release resources for social and growth-enhancing outlays,” said the Fund.

It told the Andrew Holness administration that “swiftly and forcefully addressing the shortcomings in the governance of public bodies—including those identified in the Auditor General’s report on Petrojam—is critical to enhance transparency and accountability, reduce the scope for corruption, bolster trust in public institutions and protect public funds.”

It has acknowledged other key steps being taken by the government as the country continues on a path of economic independence.

“The team welcomes the government’s proactive steps to strengthen domestic policy institutions in preparation for exit from Fund financial support later this year.