ICWI raises over $6 million for Jamaica Reach to Recovery 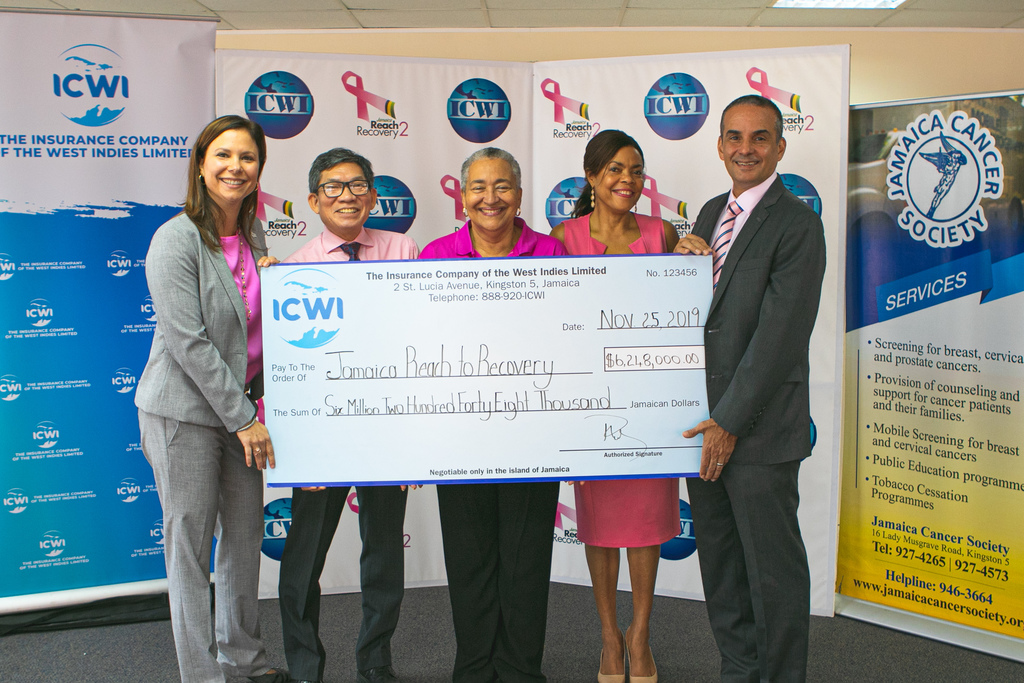 Jamaica Reach to Recovery (JRR), the support arm of the Jamaica Cancer Society (JCS), was recently presented with a cheque for $6,248,000 from the Insurance Company of the West Indies (ICWI).

With just over $5 million raised last year, 2019 was noted as the largest sum raised in the road race’s 19-year history.

The handover was made by President of ICWI, Paul Lalor, who shared his perspective on the continued success of the run since ICWI’s title sponsorship some five years ago.

“It’s such a worthwhile project. Working with Reach to Recovery has been very fulfilling in every way… fulfilling from the charitable aspect and for the staff at ICWI. We consider ourselves a ladies’ company and we are happy to be part of an initiative which supports our ladies. For next year, we hope to make an even bigger contribution as we work towards getting to that magical 10 million dollar mark,” shared Lalor.

The symbolic presentation was made to Chairperson of JRR, Carolind Graham.

“Reach to Recovery is a voluntary organization. We are all breast cancer survivors and so we know all too well how expensive treatment can be. We are truly grateful to everyone who supports the Pink Run, as in actuality they are supporting a very worthy cause. This $6 million will go a long way towards, not only the victims but also the families of those affected by breast cancer,” Graham explained.

Noting the unbiased nature of the disease, Vice President of Marketing, Distribution and Human Resources at ICWI, Samantha Samuda is imploring Jamaicans to remain mindful of the far-reaching impact of breast cancer.

“Some of the healthiest persons have been affected by this disease. It is far-reaching and because it is predominant among women, we continue to encourage our customers and members of the public to be proactive and seek support from Reach to Recovery and the Cancer Society where necessary.”

Samuda also spoke to ICWI’s continued commitment to the fight against breast cancer and support of the annual initiative.

“We are over the moon with the participation this year. It has really become a family event and it’s such a fun run. It [Pink Run] offers chip time for the more serious runners and then at the same time we see three-year-olds and four-year-olds with their families just enjoying the run.”

Pink Run’s growth and evolution each year, has reigned in participation from various groups and stakeholders.

This year, the ICWI Pink Run was staged under the theme “Tutus and Tall Socks, the Colour Edition 2” with more than 6,500 registrants - a 2,000 increase over the previous year.