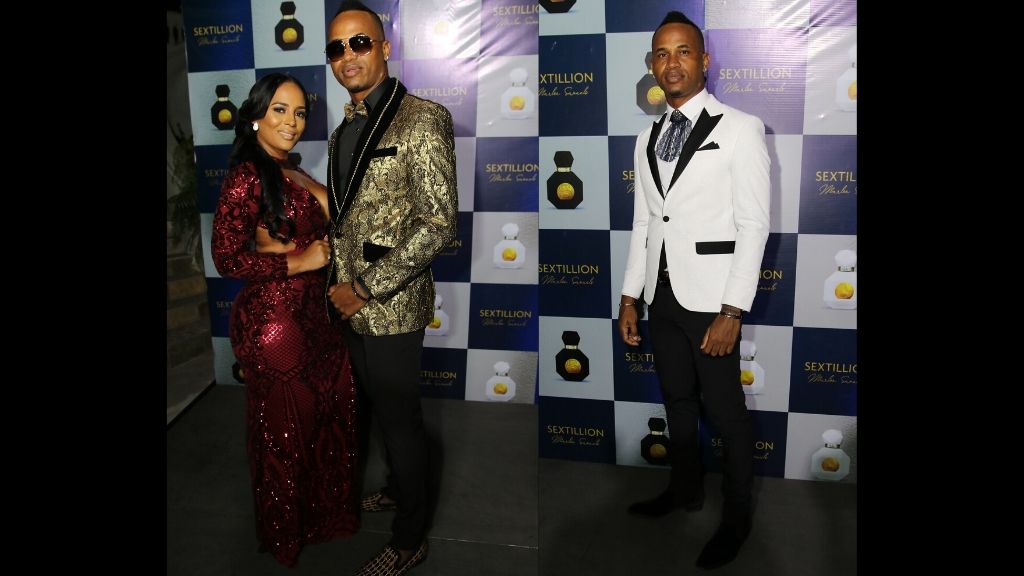 After only 18 months in the making, Sextillion 7th Power, the male and female fragrance by Windies cricketer Marlon Samuels, is finally here and just in time for his February 5 birthday.

The cricketer-cum-entrepreneur invited friends and family to celebrate a two-pronged bash at The Venetian at the Terra Nova All-Suite Hotel.

The unapologetic music buff knows how to throw a party, and along with the Amaze Marketing Hub team, had several friends from the entertainment industry perform and share in the milestone.

Samuels, an avid supporter of Brand Jamaica, felt creating his own brand of fragrances would fill the void locally.

So, after networking and meeting who he deems “the right people”, he was able to visit a perfume plant in Europe to formulate his Sextillion 7th Power.

“If you like to dress up, your cologne is usually the last thing you put on,” Samuels stated, speaking of the impetus for creating Sextillion.

He was interviewed live by viral Instagram impersonator Caspian Montgomery –– more popularly known by his IG handle @freetheworldboss –– who was also flown in for the event.

Samuels’ plan for Sextillion was simple, he wanted to create a fragrance with “exceptional quality that gets people talking,” which was the instruction for the perfumers in Europe, who created the fragrance.

Though his only knowledge of perfumes/colognes were from personal experience and a love for fragrance, Samuels was very involved in the process.

He spent 18 months travelling to and fro England to meet with the chemists, where he carefully selected the ingredients to perfect the pungent Black Orchid-based scent.

Sextillion boasts a 20% concentration of exotic notes comparable to the popular Creed line.

Ingredients in the male version include bergamot, pineapple, and musk – making it gentle and fresh on the nose.

While, for its female counterpart, top notes of sandalwood and amber reflect the sweet but woody composition.

Still, Sextillion is in a league of its own and guests would agree that Sextillion 7th Power is ‘likkle but tallawah’.

Approximately two months ago, Trinbagonian Renille Francis was contacted to be the face of Sextillion 7th Power.

Three weeks ago Francis and Samuels recorded the Sextillion video teaser at the Trident Castle in Portland.

Samuels is in negotiations with Amazon to retail Sextillion 7th Power on the e-commerce website.

Just before the event Samuels reportedly received confirmation that 23,000 bottles of Sextillion landed safely in England.

His best friend, cricketer Sheldon Cottrell purchased 50 bottles of Sextillion 7th Power in support of Samuel and simply because he can.

Samuels, who’s reportedly spent over US$150,000 on colognes, felt he was investing way too much into international brands.

With the approval of his son Dimitri and father Phillip aka “John Cherry”, Samuels was pumped up and ready to release his labour of love.

The event started when the local celeb, who had two outfit changes – the first concealed by a black trench coat – appeared fashionably late in Italian suits, purchased in Miami.

Among the highlights were a slew of performances from newcomer Shan Hill, Jah Vinci, Sagitarr, Pamputtae, and Ikaya, who also celebrated her birthday.

Samuels made a shoutout to his best friend Sheldon Cottrell – who purchased the first 50 bottles of Sextillion 7th Power and his recently departed friend Fat Rat, who became a renowned fixture of Samuel’s Instagram videos. Recording artiste Sagitarr led the tribute in song.

Radio veteran Ron Muschette, who emceed, oft relied on ZJ Sparks to bring back the vibe.

The launch ended on a high when the birthday boy and his closest family members gathered to cut the three-tiered French Vanilla cake with strawberry filling by The Bake House.

Sheldon Cottrell goes for over US$1m at IPL auction