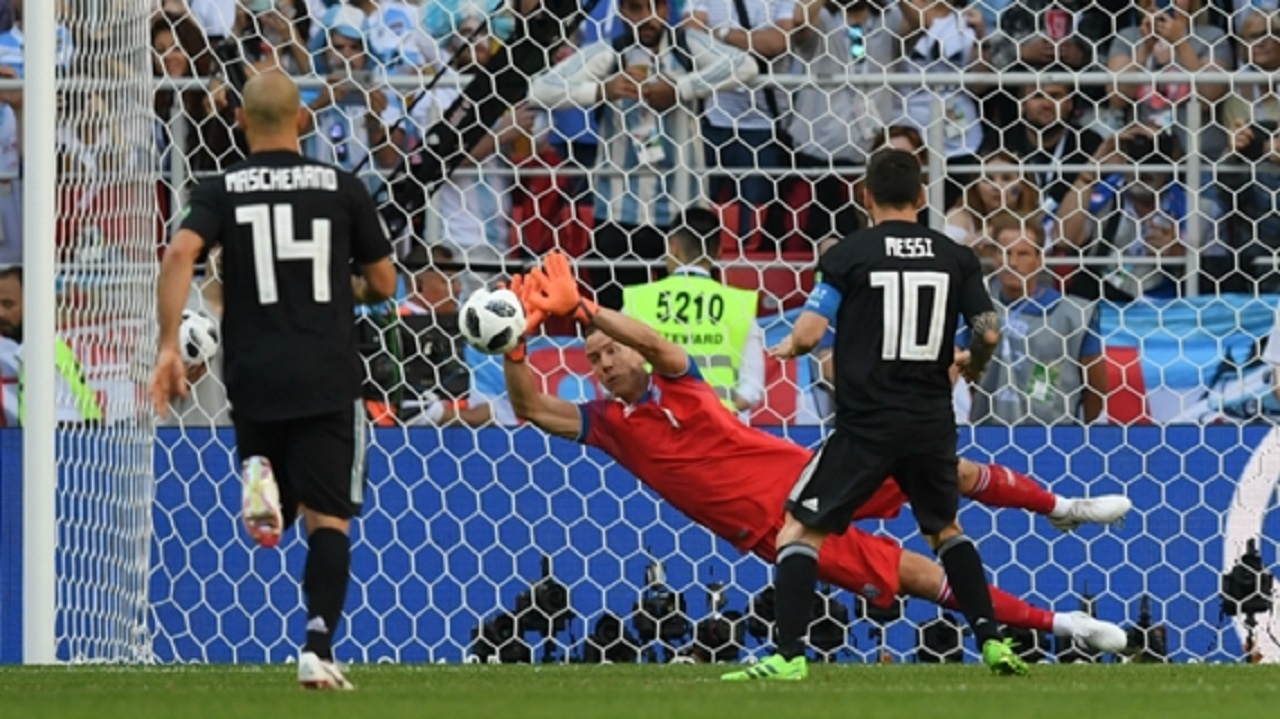 Hannes Thor Halldorsson was the hero for Iceland as the goalkeeper's penalty save from Lionel Messi secured his side a sensational 1-1 draw against Argentina in an eventful World Cup Group D opener, at the Otkrytie Arena, in Moscow on Saturday.

With Diego Maradona watching on from the stands, Messi failed to convert from the spot in the second half.

Sergio Aguero had fired the beaten finalists from four years ago ahead in the 19th minute, finally breaking his World Cup duck at the ninth attempt with a rising left-footed drive.

Yet debutants Iceland refused to melt on the main stage, Alfred Finnbogason capitalising on Willy Caballero's weak punch to score his country's maiden goal in the history of the tournament just four minutes later.

Iceland were indebted to Halldorsson for picking up a point, though, as he kept out Messi's spot-kick shortly after the hour mark.

Argentina will hope to inject some impetus into their campaign when they face Croatia in Nizhny on Thursday, while Iceland go up against Nigeria in Volgograd the following day.

After Cristiano Ronaldo's stunning display for Portugal against Spain in Sochi less than 24 hours earlier, all eyes were on rival Messi in the Russian capital.

The Argentina captain was twice denied by Halldorsson from distance in the first half, but Aguero did find a way to beat the Iceland goalkeeper.

The Manchester City forward seized on team-mate Marcos Rojo's wayward shot, controlling the off-target effort inside the penalty area before sending a fierce shot into the net.

Argentina's opener arrived after a glaring miss at the other end, the late-arriving Birkir Bjarnason carelessly pushing a side-footed effort wide of the target when the ball had broken kindly into his path.

However, Heimir Hallgrimsson's side were undeterred by the setback of conceding first. Finnbogason was on hand to make history for his country, knocking home a rebound after Caballero had carelessly parried a low cross straight to the Augsburg forward.

With their lead disappearing in a hurry, Argentina set about trying to find a second goal against determined opponents.

They were gifted the chance to go ahead again when Hordur Magnusson's clumsy push on Maximiliano Meza was spotted by referee Szymon Marciniak without the aid of technology.

Yet Halldorsson guessed correctly, diving to his right to frustrate Messi, meaning the Barcelona star has now missed four of his last seven attempts from the spot for club and country.

The keeper also produced a late save to keep out an attempt from substitute Cristian Pavon as Iceland – who also drew 1-1 with eventual winners Portugal in their Euro 2016 opener – held on to clinch another famous result in their footballing history.

Sone will 'Overcome' on August 14