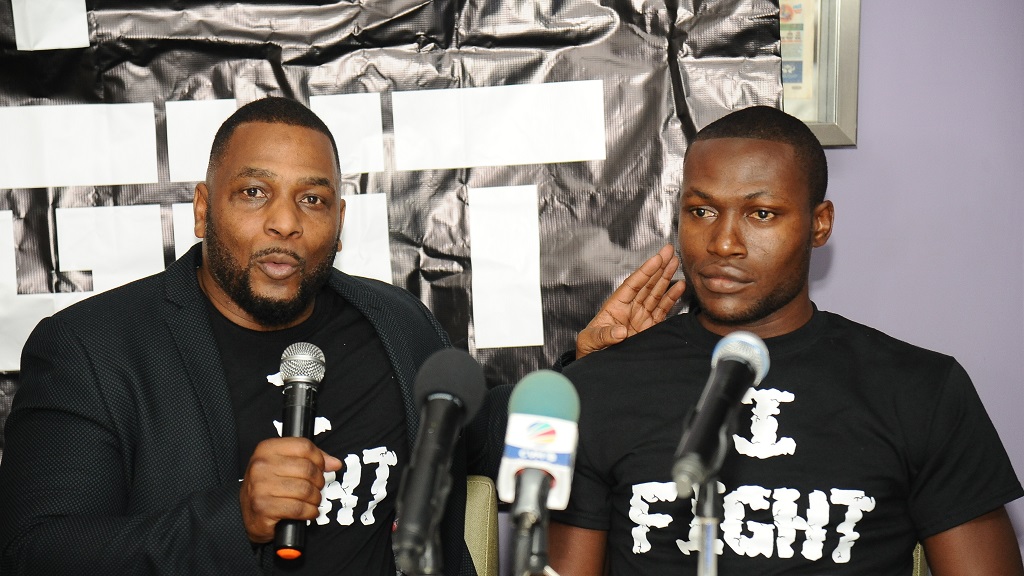 Head of I-Fight Promotion Chris Joy (left) speaks at the launch of a five-bout boxing card at Tracks & Records in Kingston on Tuesday, February 11, 2020. Jamaican Jermaine Bowen, one of the boxers on the card, listens. The fight card takes place on Saturday at Jamaica College.

I-Fight Promotion on Tuesday launched its first local fight card at Tracks & Records in Kingston with the promise of an explosive night of boxing.

The fight card is scheduled for Saturday at the Jamaica College Auditorium starting at 7:00 pm.  It will feature five professional bouts, which will be headlined by Justin Mayweather of the USA.  Justin is the brother of Floyd Mayweather, who retired with an undefeated record.

Justin will battle Christian Foster in an all USA battle.

There will be five boxers from the USA and five Jamaican boxers.

President of the Jamaica Boxing Board Stephen Jones is happy with the promotion of the fight card.

He said,  "It's been years in the making because Chris Joy of I-Fight Promotion has been taking the time to learn the landscape to put his boxers together, to learn the Jamaica boxers and for him to say I feel confident enough now to bring it to the public and to advertise on the level, I think I am very excited because he has learned the sport now, he has learned the country, and he knows the sport, but he has learned it from a Jamaican perspective so I am excited."

The boxers are looking forward to the fight card.

Christopher Roderiquez promised that his fight will be "extremely explosive" He said,  "I trained extremely hard for this fight.  You are going to see ongoing pressure.  I am going to pressure him (Martin Anderson) from round one to round four."

Anderson said he was ready for the challenge from Roderique.

Promising Jamaica boxer Jermaine Bowen said, "you can always expect the best from me."