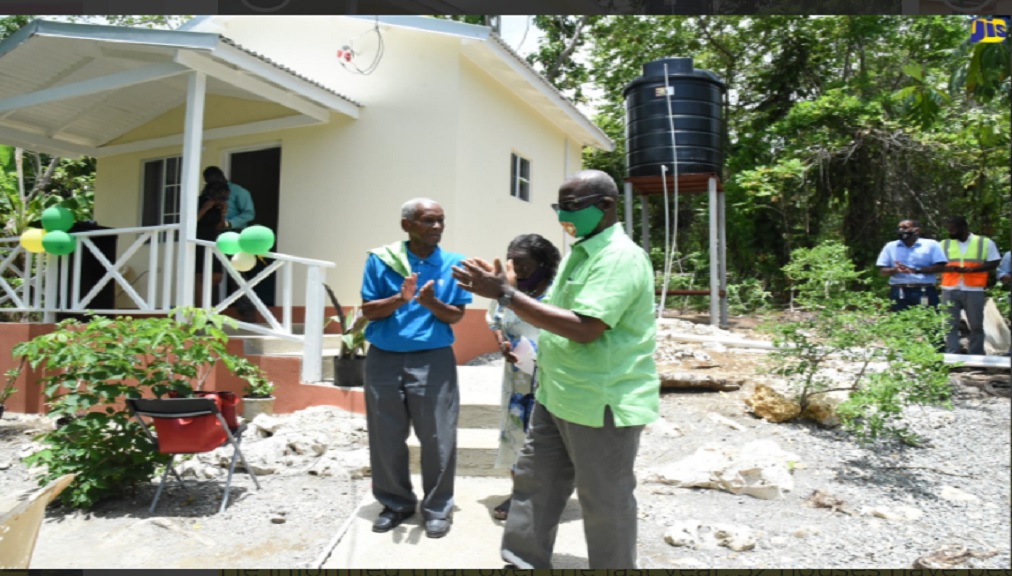 Minister of Local Government and Community Development, Desmond McKenzie (right), celebrates with beneficiaries of an indigent house (from left): Everald Gibson and his wife, Hazel in Long Road, Portland.

Minister of Local Government and Community Development, Desmond McKenzie, says the Government will be delivering some 100 indigent housing solutions in 12 months for persons in need across the island.

He informed that over the last year, 32 houses have been built and handed over to beneficiaries, with another 12 to be constructed by the end of the financial year.

“I took a conscious decision that if we are going to provide for these people who have served their country, we should provide the best possible solution so that they can be comfortable living out the last days of their lives,” Minister McKenzie said.

He was speaking at the handover of a house to an indigent family in Long Road, Portland.

Minister McKenzie said that the beneficiaries on the Indigent Housing Programme have served the country in various areas, such as health and security, and while they have fallen on hard times, the best care must be given to them.

He also added that the Ministry is looking at increasing the funds allocated to the municipal corporations for social housing assistance.

For his part, Mayor of Port Antonio, Councillor Paul Thompson, welcomed the new dwelling for Everald Gibson and his wife, Hazel.

Meanwhile, Member of Parliament for East Portland, Ann-Marie Vaz, said it was a “good day, because, one of the basic needs of human beings is the need for shelter”.

“The gentleman (Everald Gibson) served Jamaica for years, and for him to get a house is a joy for me,” she said.

Mrs Vaz added that the housing programme is critical, especially for elderly persons, so that they can “live in comfort, with a roof over their heads”.

BSJ gets money from NHT to develop bamboo houses