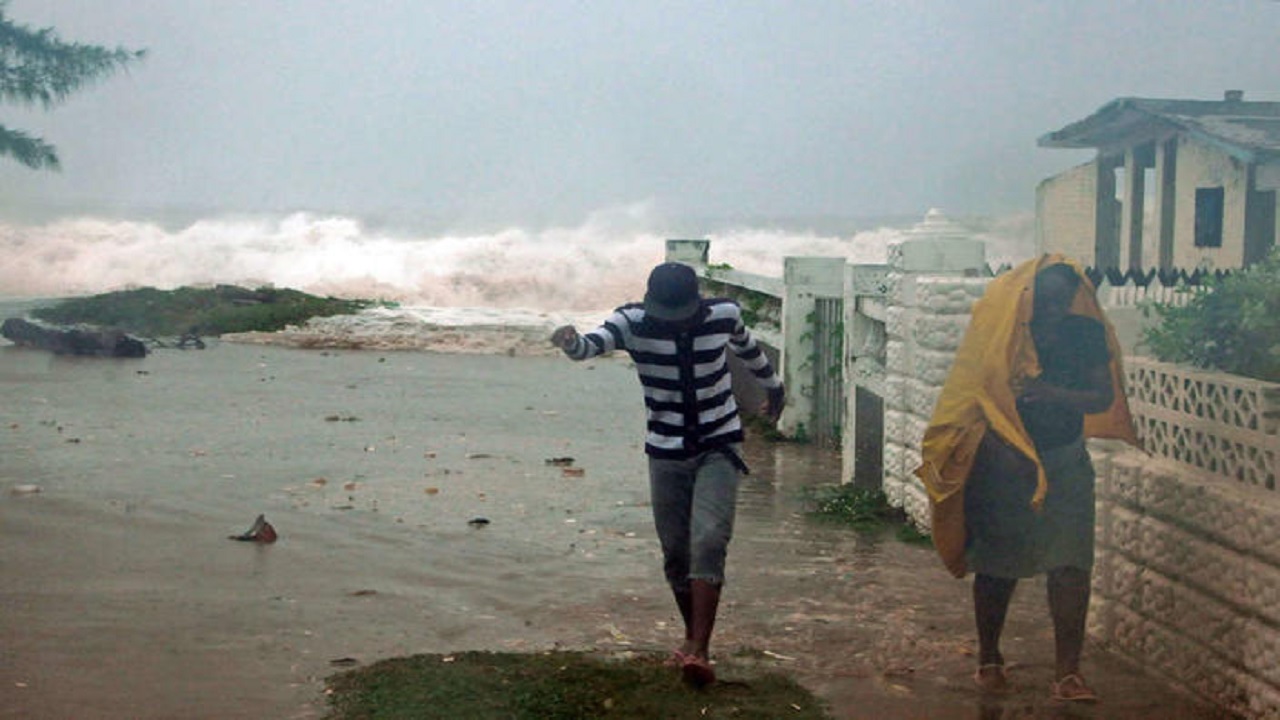 Jamaicans look for shelter as Hurricane Gilbert approached the island in 1988. (PHOTO: AP)

The hurricane season is upon us once again. This year, it is expected to be 'near-normal' with approximately nine to 15 named storms, of which four to eight could become hurricanes.

However, let's not put our guards down, as a 'normal' hurricane season can still be very disastrous.

Over the years, Jamaica has been affected badly by a number of raging storms which have wreaked havoc on the island. Loop News will attempt to recall 10 of the most impactful systems that Jamaicans will likely never forget. 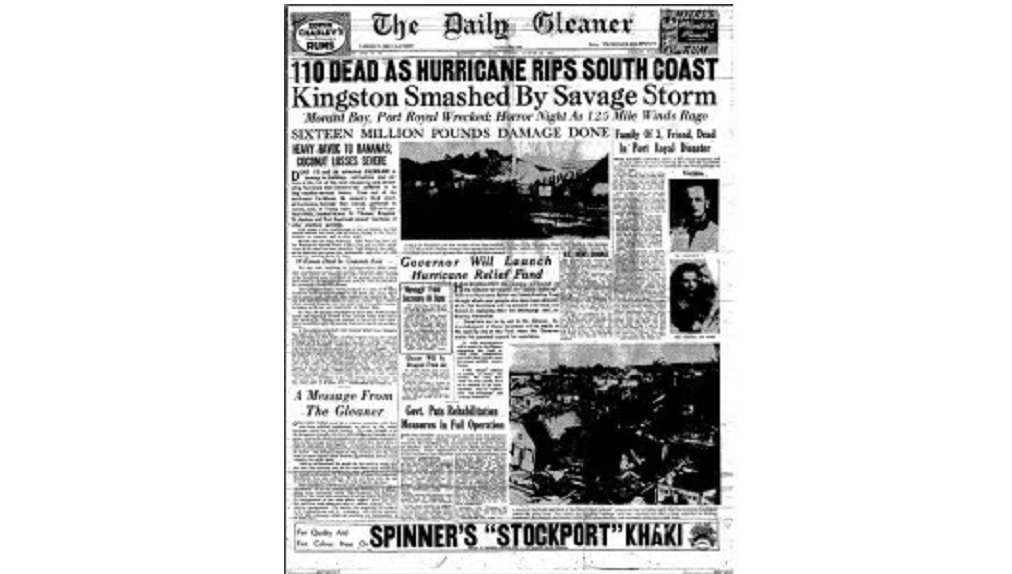 Hurricane Charlie – Hurricane Charlie smashed into Jamaica on August 17 and 18, 1951 and caused massive destruction to the island’s pre-independence infrastructure, recording a massive death toll and leaving thousands injured. The records show that 154 persons were killed by the hurricane, including 57 in St Thomas and 54 in the Corporate Area. Some 2,000 persons were reported injured and more than 9,000 were left homeless. Damage to the island’s south coast was devastating and shipping in the Kingston harbor was badly affected. Some five large ships were driven ashore by the might of Charlie. Eighty per cent of the town of Morant Bay was destroyed and the island’s banana, coconut and citrus industries were all but wiped out. Even after Charlie passed heavy rainfall lingered triggering a number of landslides across the island.

The Gilda Floods – A tropical depression resulted in a continuous five-month deluge of rainfall over the island which culminated with massive flooding on June 12, 1973. There were 42 recorded deaths and nearly 160,000 persons were negatively affected by the impact of the floods. Some 40,000 were left homeless and another 50,000 suffered significant losses. Roads, buildings, water supply systems, bridges, agricultural crops and livestock were most affected in Westmoreland, Hanover, St James and Trelawny. In St Elizabeth, the district of New Market was completely covered in water. Sewerage plants and graves were washed out and there was concern that another typhoid outbreak would occur. The effects of the Gilda Floods prompted the government of the day to set up the Office of Disaster Preparedness and Emergency Management (ODPEM) to raise a consciousness among Jamaicans regarding hurricanes and other disasters.

Hurricane Allen – While not as powerful as Charlie, Hurricane Allen also hit the island hard when it landed in 1980. The hurricane was responsible for eight deaths and cost an estimated $200 million worth of damage. The north coast of the island was hardest hit and some 5,000 persons were left homeless. The agricultural sector was also seriously set back. 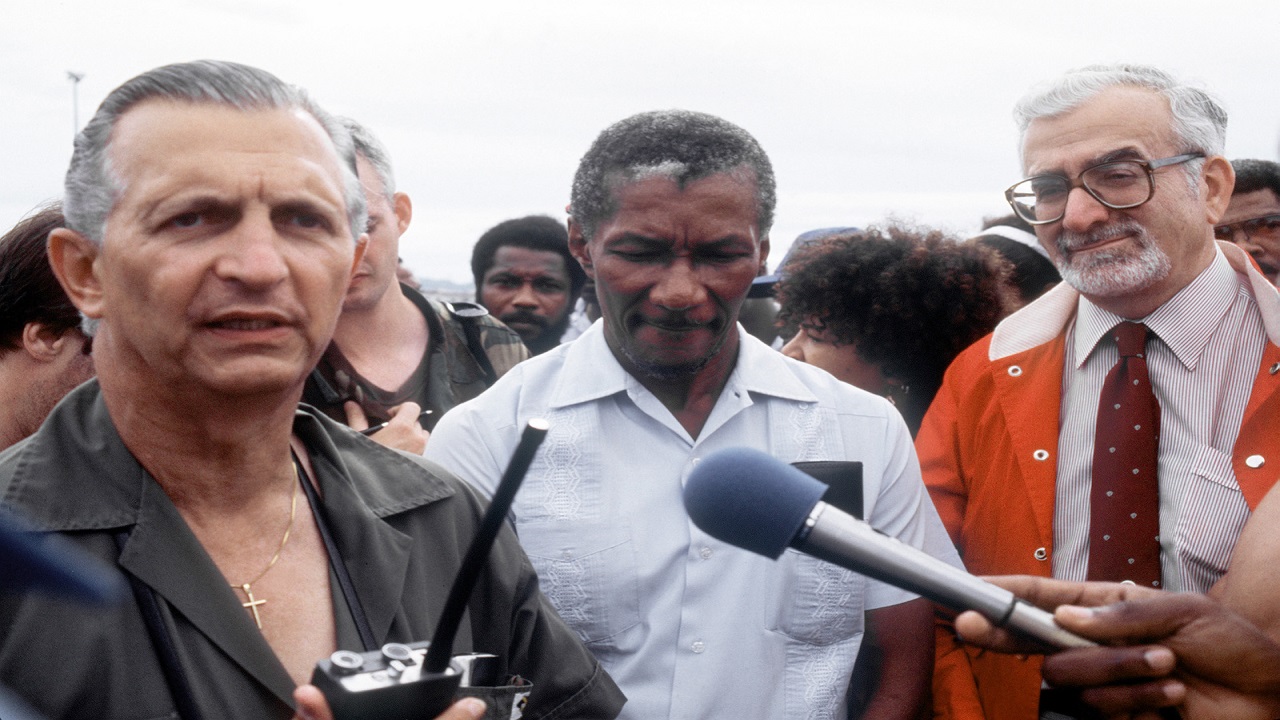 Then Prime Minister Edward Seaga speaks to reporters after accepting the first shipment of US-provided supplies, in the aftermath of Hurricane Gilbert's passage across Jamaica in 1988. (PHOTO: PICRYL)

Hurricane Gilbert – The subject of the hit single 'Wild Gilbert' by Lovindeer, Hurricane Gilbert made landfall on the east coast of Jamaica as a Category 3 hurricane but later intensified into Category 5. For many Jamaicans, it was the first real experience of the true might of 'Mother Nature'. After September 12, 1988 the lives of Jamaicans would never be the same. Hurricane Gilbert packed winds of 175 miles per hour and had an eye that measured 40 miles wide. No section of the island was spared. Gilbert accounted for a number of lives and left hundreds of people homeless. Emergency shelters (those not destroyed by Gilbert) were overcrowded.  The winds from the hurricane lasted about 12 hours and wiped out the entire 7,500 acres of bananas being grown for export. Tourism, mining and most industries were affected. The entire island was out of electricity. There was wide scale flooding and a massive food shortage. Almost every roof that was not made of concrete was blown off. In the aftermath of the hurricane, some of the desperate masses looted businesses. Police reports at the time indicated that more than $50 million worth of goods were looted, with only $2.5 million being recovered. Due to the continued criminality, the capital city of Kingston was placed under a curfew. Two police officers who were found guilty of looting an appliance store were sentenced to prison. Many roads were rendered impassable and at least 20 per cent of the island’s houses were severely damaged. The island was out of electricity and running water was a luxury with some sections of the island getting access to these essential services months after the hurricane passed. The estimated cost of damage from Gilbert was $800 million.

Hurricane Dean – Hurricane Dean slapped Jamaica on August 19, 2007 and killed 4 persons while injuring more than 500. Dean devastated Portland Cottage and Rocky Point in Clarendon and Bull Bay and Caribbean Terrace in St Andrew. Over $5 billion was recorded in housing damage with some 29,000 houses being destroyed or damaged. The agriculture sector suffered losses to the tune of $1 billion, education was affected to the tune of $700 million and the health sector was damaged to the tune of $168 million. Total damage was recorded at $23.8 billion.

Hurricane Katrina – In August 2005 Hurricane Katrina formed as a tropical storm off the coast of the Bahamas and seemed headed directly for Jamaica. However the system veered away from the island and made landfall in Florida while still categorised as a tropical storm. However, Katrina grew in strength after making landfall and developed into a powerful category 5 hurricane and went on to create massive damage and take many lives in the city of New Orleans and other areas of the US state of Louisiana. 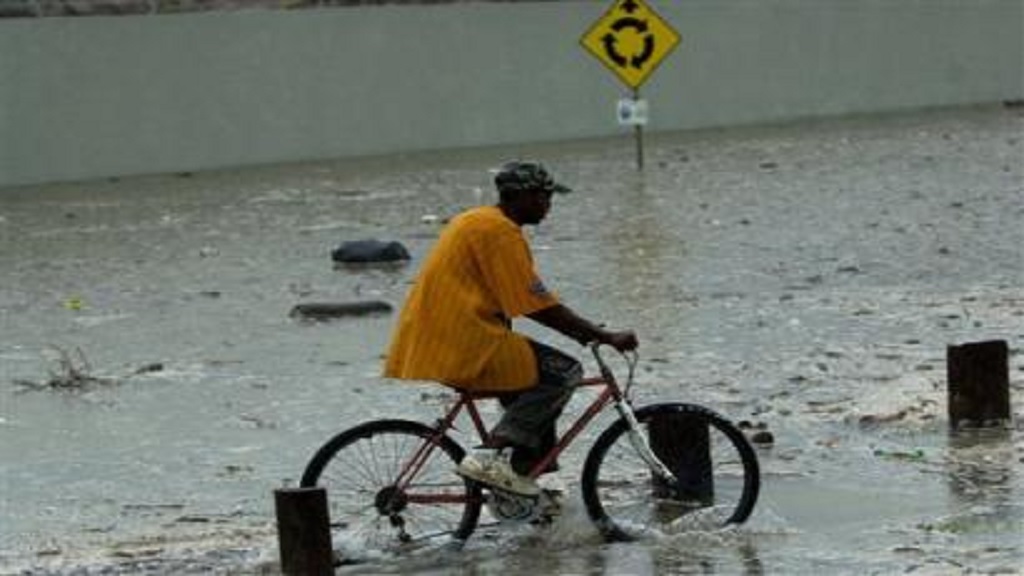 A man drives his bike in a flooded street in Kingston as Hurricane Ivan approached the country. (PHOTO: AP)

Hurricane Ivan – Hurricane Ivan was also another powerful weather system that devastated Jamaica. Ivan, which was rated as a category 4 cyclone, landed on September 10, 2004 and by the next day was upgraded to category 5. Ivan left 18,000 people homeless and took 17 lives. Roads were badly damaged and washed away in some instances and rivers overflowed their banks. There was also significant damage to the cash crops grown in the southern farming belt in the parishes of Manchester and St Elizabeth known as the bread basket of Jamaica. The entire community of Portland Cottage in Clarendon was destroyed and significant damage to infrastructure was also recorded in the fishing village of Old Harbour, St Catherine.

Tropical Storm Nicole – In 2008, Tropical Storm Nicole poured a deluge of rainfall on the island resulting in island wide flooding.  Some 13 deaths occurred including that of a five-year-old girl who was crushed to death after a heavy tree limb fell on a board dwelling she occupied with her relatives. Nicole recorded Rainfall measuring over 100 millimeters of rain over a 12 hour period. About 40 percent of the island’s population was without power after the storm. Nicole left Jamaica with a repair bill of more than $10 billion, more than 150 homes damaged and over 200 communities surrounded by water.

Hurricane Sandy – While only a category 1 hurricane, Sandy caused severe damage to the country’s infrastructure. Thankfully no lives were lost but the eastern end of the island was badly affected. There was also heavy damage to several homes, business places, schools, churches, farms and roads. Some 85 per cent of Jamaica Producers’ banana crop was destroyed which resulted in the disruption of the banana chips industry.

This Loop News interviewee complained about having to fork out big bucks on hurricane preparation for Matthew after the weather system avoided the island.

Hurricane Matthew – Jamaicans who experienced Hurricane Matthew will remember that weather system because it hit their pockets hard. In early October 2016, Matthew was forecast to hit Jamaica and the supermarkets, hardware stores, bakeries and other supply stores did a thriving business as by now seasoned islanders made preparations and stocked up for the impact of the system. However, Matthew, which was packing 160 mph winds, avoided the island. Loop News' coverage of the near miss resulted in a video which went viral on social media with an interviewee bemoaning the fact that he had bought housing repair supplies, food and other commodities with his last dollar and now had no use for them. “Meh Matthew deh?” he asked, “Who does that?” Matthew went on to pummel the neighbouring countries of Cuba and Haiti were it did major damage, taking 564 lives and causing US$2.8 billion damage.

The little, board house that ‘miraculously’ survived Hurricane Gilbert