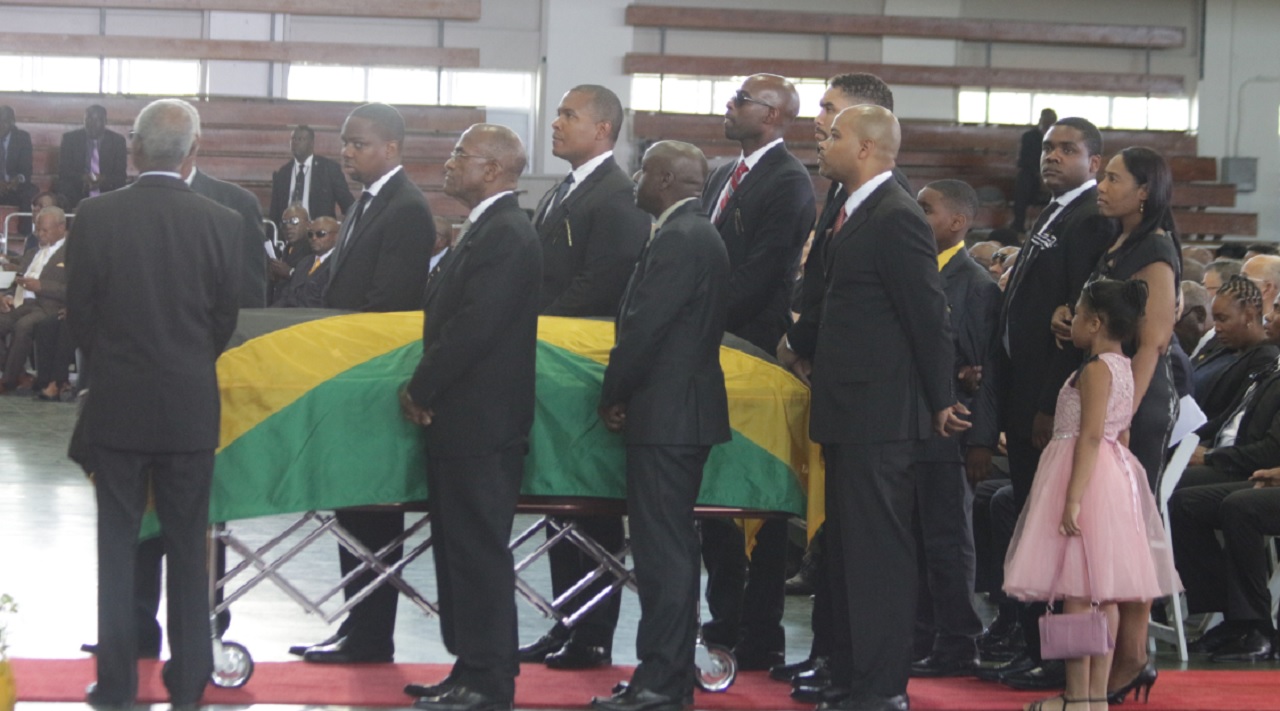 The casket bearing the remains of president of the Jamaica Football Federation (JFF), Captain Horace Burrell is being surrounded by family members and pallbearers. At the back of the casket (from left) are Zuri Piggott, granddaughter of Captain Burrelll; daughter Dr Tiphani Burrell-Piggott and sons Romario Burrell and Major Jaeden Burrell.

Hundreds of persons came out on Wednesday to pay their final respects to the late president of the Jamaica Football Federation (JFF), Captain Horace Burrell, at a Thanksgiving Service at the National Arena in Kingston.

The venue contained a number of local and international football dignitaries that included administrators, coaches and players, with a number of politicians from the region joining others from both the Jamaica Labour Party and the People's National Party.

Other sporting disciplines in the island were also well represented, during the three-and-a-half-hour long service, as well as representatives from his companies, Captain Bakery and Grill and Captain's Aviation Services.

Giving tributes in songs were Ernie Smith, who did "I Believe", the Jamaica Constabulary Force choir, Richie Stephens who sang "My Way" and Ashe Assembly - the group performing "Rise Up", which was done to celebrate Jamaica's qualification to the World Cup in France 1998.

The National Arena was transformed into the national colours of black, green and gold with the stage in black, a yellow cross placed at the centre of the backdrop, which was adorned with green pepper lights.

At each end of the stage were two huge television screens that were placed in cases that were also decorated with black, green and gold trimming.

Captain Burrell, lying in a casket draped on the inside in white, was dressed with a black and yellow tie, black jacket and a sky blue shirt with the bottom of the casket, while being viewed by the large turnout, draped with a flag of Jamaica.

Reverend Adinhair Jones gave the homily and he preached about the resurrection, with Al Miller, who worked closely with Captain Burrell during his tenure as president of the JFF, prayed for the family.

Captain Burrell's close friend, Horace Reid, a former General Secretary of the JFF, did the eulogy.

The Combined Military Band was also a vital part of the service and their duties included playing the National Anthem at the beginning of the service.

Captain Burrell led the JFF from 1994, excepting for a four-year period.