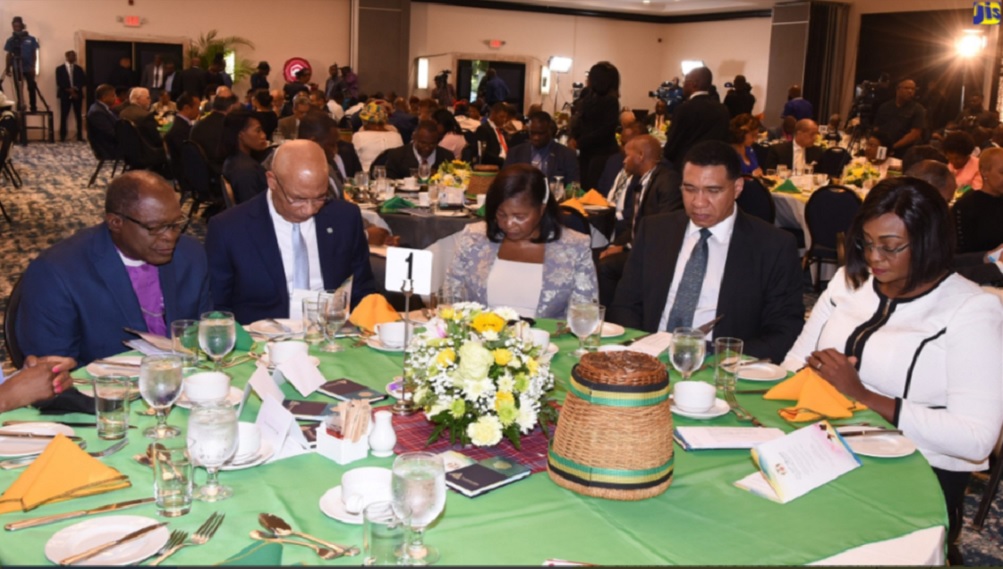 Hundreds of Jamaicans, including leaders of Government, its agencies and the private sector, joined hands for the 40th consecutive year and prayed for the upliftment of the nation, at the annual National Leadership Prayer Breakfast (NLPB), held on Thursday (January 16), at The Jamaica Pegasus hotel, in New Kingston.

It was also a time for reverence and to call on the Almighty to bring forth peace among everyone living on the island.

Patron of the event, Governor-General, His Excellency, Sir Patrick Allen, spoke of the major impact that the NLPB has had on the nation over the past 40 years.

“Forty years ago, Jamaica experienced turbulent times in its modern history. For many persons, peace was elusive, and the more than 1,000 lives that were lost bore stark testimony to those frightening events,” he said.

He argued that without events such as the NLPB, Prayer Vigil, Heal the Nation, Heal the Family Day of Prayer and the sincere intercessions of persons of faith across the island, the situation in Jamaica could be worse.

The Governor-General said one major focus of the NLPB is to pray about the crimes taking place across the island.

“Through the totality of this morning’s experience, we can be inspired to earn the thanks of a grateful nation, by ensuring that we curb the lawlessness and bring this pandemic of crime and violence under control,” he said.

He continued to outline other benefits of the event.

“One significant aspect of the National Leadership Prayer Breakfast is the annual donations we make to charitable projects. The donations have risen exponentially over the past 32 years and we have disbursed $122 million to deserving persons and organisations,” the Governor-General said.

“These funds have helped in medical care, construction of infrastructure for the homeless, assistance to children in State care, education, flood relief and skills training programmes,” he noted.

This year’s beneficiary from the donations collected at the event is the Child Resiliency Programme (CRP) of the Violence Prevention Alliance.

Meanwhile, Custos of St. James and Pastor of the Faith Temple Assemblies of God, Bishop the Hon. Conrad Pitkin, also reflected on the contributions the founders of the NLPB made to the society and reiterated the importance of the event in today’s society.

“I can vividly recall the turbulent period of the 1970s leading up to the 1980s. It was a period characterised by deep national conflict, disorder and confusion; a period in which our nation descended into virtual chaos and instability. It was during this period that the leaders of the Christian church, the men and women who understood the heart of God and what was required of a nation in trouble, came together. and their willingness to be obedient to God gave birth to this annual gathering,” he said.

The Custos argued that if Jamaica is to achieve its national goals for 2030 of empowerment, social security, economic prosperity and the health and well-being of all Jamaicans, corruption and crime need to come to an end.

The annual NLPB brings together leaders at all levels at the start of each year for fellowship and prayer, and to ask God’s blessings on the nation.