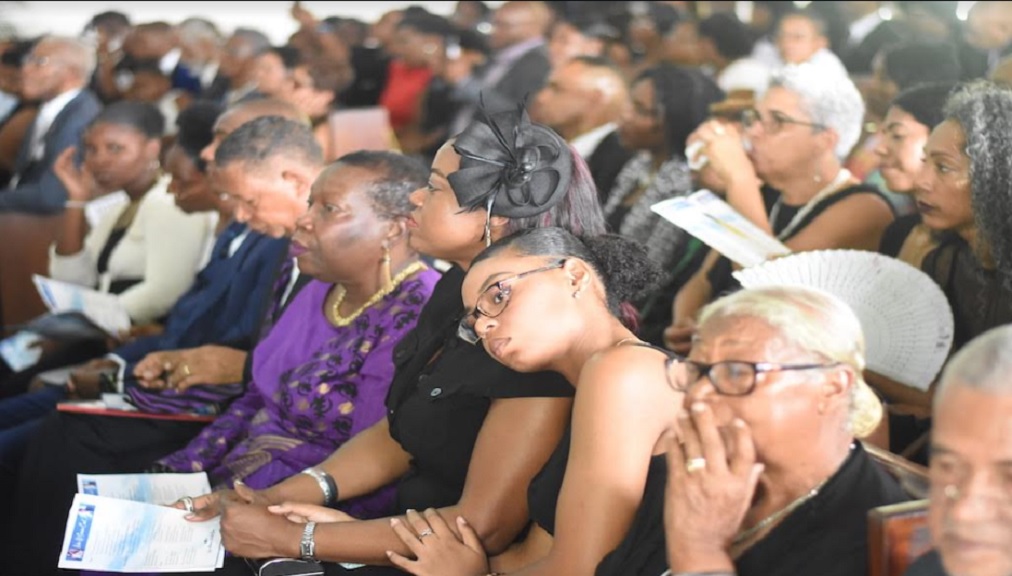 Broadcaster Anthony Young was on Saturday described by family and friends as a loving, humorous individual who demonstrated good character and who was a shining example to all those he encountered throughout his life.

The thanksgiving service to celebrate the life of the man who worked in the media for over 35 years was held at the Good Tidings Mennonite Church on Whitehall Avenue in St Andrew.

The nearly three-and-a-half hour-long service had a wide cross-section of the Jamaican society attending that included politicians, musicians and media workers along with co-workers at the various entities that Young, popularly called Tony or TY, had served over the years.

Tributes in music were given by his friends Leroy Smith, Bongo Herman, Edwin Myers, Bro Cash and Grace Thrillers. There were also songs by the family and niece Avia Aiken-Brown.

The remembrance was given by sister-in-law Gleenson Young.  The eulogy was read by Young's fellow broadcaster Marlene Stephenson Dalley.

Tony Young died on August 3 after battling kidney diseases since last year, when he was diagnosed with stage three renal failure and was in and out of hospital both locally and in the United States of America.

In giving the remembrance, Gleeson Young said that Tony "walked the walk and talked the talk" of being true to self and although giving counsel to many, did not seek council for himself.

She said Tony's sense of humour was always evident at gatherings of the closely-knit family, as he displayed connection with family members and joked that he never learned to swim, because he said, that "the day I swim is the day I see a fish walking up Half-Way Tree Road".

Charles, who spoke on behalf of the government of Jamaica, said that Tony was a "nice guy", whom he worked with on KLAS while doing a talk show at the radio station.

According to Charles, he has never met an individual who had bad things to say about Tony, as he demonstrated good character, love and friendship that should be spread among the general populace.

McKenzie, a major figure in the Jamaican entertainment sector, said he and Young had developed a friendship from 1981 when they worked together at the now-defunct Jamaica Broadcasting Corporation (JBC).

McKenzie said that Young kept him in line with reality many times and while many of the young people who worked at the media entity at the time, switched to other career areas, Tony remained in radio over the years years, while being guided by his Christian principles.

Family member, Ford, said that Tony took care of his immediate family and did not "bend" even during times of adversity. He said, Tony loved his wife, respected his neighbours and was a friendly person who commanded respect.

Anderson, of KLAS, said that Tony's life was exemplified by character built on the fundamentals of love, honesty, goodwill and compassion to others. He described him as a phenomenal broadcaster with a voice that "soothes the mind and spirit."
According to Anderson, Tony never said no and would go the extra mile to ensure that what was asked of him was completed. He said another ability of Young was that he was able to spot talent.

"Tony loved what he spent his life doing while contributing significantly to the growth and development of the staff members and has left an indelible mark on the media landscape that should never be forgotten," said Anderson.

Pastor Douglas remembered Tony from his childhood days attending the church, which he said helped honed his broadcasting skills through an exchange programme with the head body in the United States. He said that Tony touched the lives of all those that he encountered.

Meanwhile, Green, the executive director of the Broadcasting Commission of Jamaica, said that Tony was an unassuming person, which belied his experience.

He said Young had an exceptional work ethic, which was worthy of emulation, as his record as a broadcaster was unblemished.

The sermon was given by Pastor Liston Aiken, who told Christians in the audience that they must touch the lives of the community like Tony did.

He said the Christians should extend their love of Jesus to the lives of the people in the community. He advised them to stop and minister to members of the community in their daily commute.