How Trump's immigration order could hurt the US economy 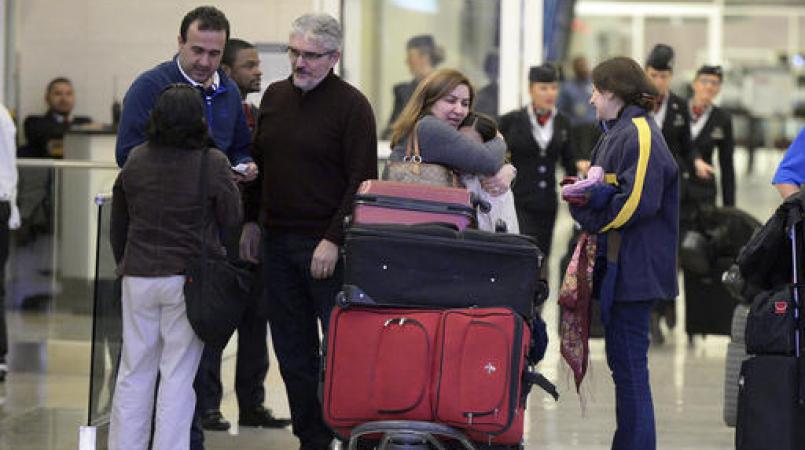 Trump's immigration order followed his order to build a wall along the border with Mexico and his vow to rip up NAFTA. Combined, those moves could discourage visitors and students from many countries — not just the seven covered by the order — economists say.

They also reflect Trump's shift toward an "America First" approach and away from the pro-globalization policies embraced by his predecessors. His combative trade stance potentially could open the door for China and other economic powers to fill a void.

"Broad-brush policies like this people barrier impede growth and certainly do not accelerate it," David Kotok, chief investment officer at Cumberland Advisors, wrote in an email. "Trump has now set back the positive elements of global exchange in both goods and services."

Foreign tourists provide critical support to the U.S. economy. In 2015, they spent roughly $199 billion on items ranging from hotel rooms and restaurant meals to plane tickets and amusement parks. That spending counts as exports. Travel and tourism made up nearly 9 percent of U.S. exports that year.

Some economists say they worry that Trump's order could create an echo of the post-9/11 period, when travel to the United States plunged, in part because of much tighter security. In the 10 years that followed — a period the travel industry recalls ruefully as the "lost decade" — the U.S. share of overseas travel fell by nearly one-third, according to the Council on Foreign Relations. That cost the U.S. economy $500 billion.

"The message got around the world that the United States was an unfriendly country to visit — that it's a big hassle to visit there," said Edward Alden, a senior fellow at the Council and author of "The Closing of the American Border," a book about U.S. security after 9/11.

Given the disruptions at U.S. airports caused by Trump's immigration order, which were widely covered by television news around the world, "it's that story all over again," Alden said.

Many high-tech companies have also opposed Trump's order because they say it blunts their competitive edge in recruiting high-skilled talent.

"Apple would not exist without immigration," the company's CEO, Tim Cook, said this week. The biological father of Apple's founder, Steve Jobs, was an immigrant from Syria.

When foreign students attend an American college or university and pay tuition, that spending also counts as a U.S. export. Education spending from overseas reached roughly $36 billion in 2015 — up nearly 50 percent from three years earlier, according to Commerce Department data.

Proceeds from tourism and education help narrow the nation's trade deficit, a frequent target of Trump's criticism on the campaign trail. Travel and tourism exports exceed overseas sales of autos and auto parts, which totaled $152 billion in 2015. Agricultural exports amounted to $137 billion.

Yet Trump's orders "couldn't happen at a worse time," said Adam Sacks, president of Tourism Economics. Even before Trump's executive orders, a strong dollar had made it costlier for foreign travelers to visit the United States.

And weaker economies in many countries, from China to European nations, have begun to slow the flow of tourists to the United States. Sacks estimates that travel and tourism spending barely grew last year from 2015's record level.

"The P.R. optics on this are terrible," Sacks said.

Trump's immigration order and belligerent rhetoric about a wall along the Mexican border add up to "a series of immigration and trade policies that are all conveying to the world that we're not interested in visitors coming to the U.S.," Sacks said.

Laura Mandala runs a company in Alexandria, Virginia, that does market research for clients in the travel industry, including the Marriott hotel chain and state travel bureaus. Many of her clients spent less on her services in the years that immediately followed 9/11. Now, she fears a repeat.

"It's the uncertainty," Mandala said. "When something dramatic happens, they put a freeze on spending until they can figure out what the environment will be like."

Concerns are rising among administrators of colleges and universities, too. Over the past decade, the number of foreign students in the United States soared 73 percent, according to Moody's Investors Service. Overseas students typically pay the full tuition price, receive little financial aid and make up 8 percent to 10 percent of tuition revenue in the United States, Moody's estimates.

More than 1 million foreign students studied in the United States during the 2015-2016 academic year, supporting 400,000 jobs in the process, according to data compiled Open Doors, a joint project of the Institute of International Education and the State Department.

After visa procedures were tightened in the wake of 9/11, the enrollment of overseas students fell for three years, according to NAFSA. One reason for the drop: U.S. consulates overseas were required to conduct in-person interviews with all would-be travelers and students seeking visas. Those tightened procedures caused significant delays.

The State Department subsequently allowed foreign students to seek waivers from the interviews when renewing their visas. But Trump's order suspends the waiver program.

That could lead to future delays, said Rachel Banks, director of public policy at NAFSA, and potentially limit the flow of overseas students to the United States.