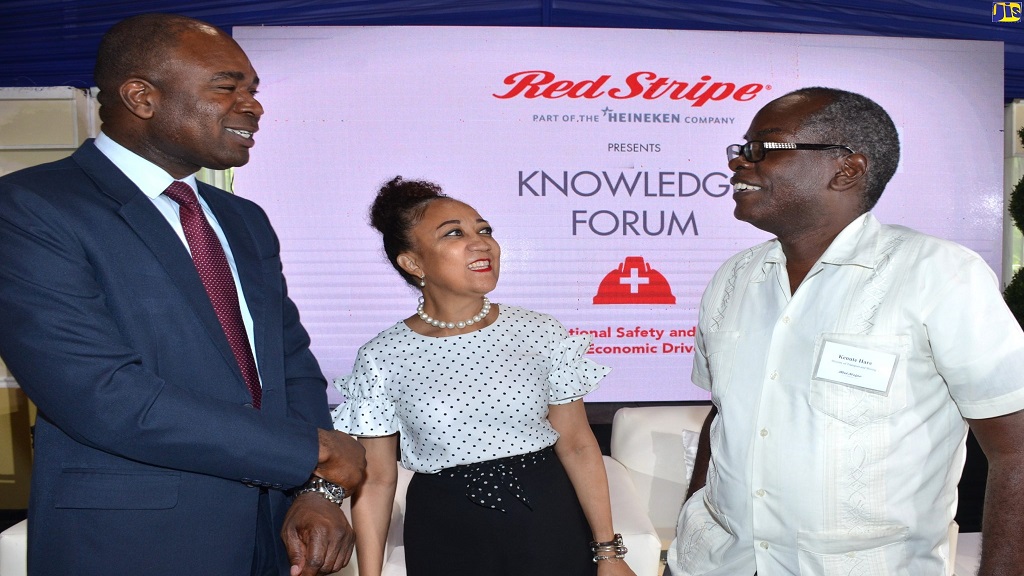 State Minister in the Ministry of Labour and Social Security, Zavia Mayne (left), in discussion with Head of Corporate Affairs, Red Stripe, Dianne Ashton-Smith (centre), and Director of the Road Safety Unit, Ministry of Transport and Mining, Kenute Hare, at the third instalment of the Red Stripe Knowledge Forum series on Wednesday, October 23 at the Terra Nova Hotel in St Andrew.

The Occupational Safety and Health (OSH) Bill is now before the Joint Select Committee of Parliament.

State Minister in the Ministry of Labour and Social Security, Zavia Mayne, made the disclosure at the third installment of the Red Stripe Knowledge Forum series on Wednesday, October 23 at the Terra Nova Hotel in St Andrew.

The forum was held under the theme ‘Occupational Safety and Health: An Economic Driver’.

The OSH Bill is expected to usher in a new paradigm that is compliant with existing International Labour Organisation (ILO) standards.

Mayne said the Bill is expansive in scope, and should be applicable to all branches of economic activity.

“This includes all areas or sectors of employment within which workers are employed or engaged for hire or reward, and extends to the public service,” he stated.

Mayne added that the main objective of the Bill is to prevent accidents and injury to health arising from or occurring in the course of work, stating further that a key characteristic of the Bill is protecting workers and other persons against harm to their safety, health and welfare through the elimination or minimisation, so far as is reasonably practicable, of hazards, serious injury and risks that emanate from plant, substances and structure.

Another key characteristic is providing for fair and effective workplace representation, consultation, co-operation and resolution of issues relating to occupational safety and health.

The Bill is also geared at encouraging trade unions and employer organisations to take a constructive role in promoting improvements in occupational safety and health principles; secure compliance with the Act through effective and appropriate compliance and enforcement measures; and provide a framework for continuous improvement and progressively higher standards of occupational health and safety.

Mayne said the Factories Act excludes vital sectors, such as the financial sector, shops and offices, agriculture and the public sector, which he said makes it difficult to adequately safeguard safety and health of workers in those sectors.

“Businesses are built from employees. If our employees are not safe, healthy and happy, then we don’t have a business. As such, it is important for businesses to understand the role that they play in creating environments that promote sustainability, not just of their businesses, but also their employee base. We know that investing in and promoting the well-being of employees provide inestimable value to all stakeholders,” she said.

The event also featured several presentations from industry leaders on best practices and emerging trends in occupational safety and health.

Conference to shine spotlight on occupational therapists this week

Workplace burnout: How to avoid a mental health crisis