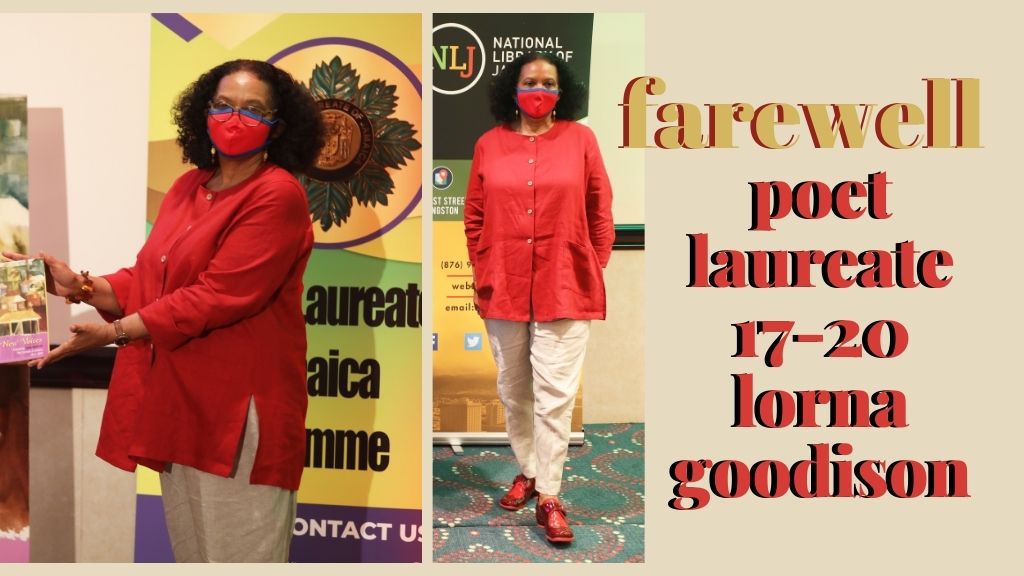 The morning gala also facilitated the launch of the new anthology New Voices: Selected by Lorna Goodison, Poet Laureate of Jamaica, 2017-2020, as the signal literary project of Goodison’s tenure with the Library.

Goodison expressed a desire to use the publication as a launching pad for the 15 young poets that contributed the selected creative works within the period of her tenure to be part of the collection.

She remarked that both creative acumen and attention to detail had set the young poets apart, presenting the artistic works at a particularly high standard.

This made for a seamless weaving together of the overall publication in keeping with the goals the NLJ and the Poet Laureate Programme.

Through its Poet Laureate Programme, the NLJ recognised the four top candidates emerging from the Poet Laureate of Jamaica and Helen Zell: Young Writer’s Prize for Poetry competition.

The competition period for the year 2019-2020 ended in January with a shortlist of 14 candidates for adjudication.

The official award ceremony — which was to be held along with the NLJ’s World Poetry Day Celebrations, on March 21, 2020 — was, like many other events, thwarted by the sudden onset of COVID-19 and the accompanying government-mandated restrictions.

The ceremony of appreciation for the internationally recognised Jamaican Laureate included the patronage of Olivia Grange and Alando Terrelonge from the Ministry of Culture, Gender Entertainment and Sport (MCGES), who both expressed fondness with Goodison.

Special sentiments of honour and celebration were also echoed by Joy Douglas, board chair of the NLJ, Professor Emeritus Edward Baugh, co-chair of the Poet Laureate of Jamaica Committee, and Beverley Lashley, national librarian.

The proceedings were not without artistic splendour as it saw special musical selections from violinist Michael Lewis as well as special poem recitations by awardees Gail Hoad and Demoy Lindo.

Minister Grange, within moments of sharing her remarks, officially announced that the Poet Laureate of Jamaica Programme would now fall under the direct oversight of state minister Alando Terrelonge, as the MCGES seeks to build on the foundations set by Goodison.

This, in efforts to ‘raise the profile of the programme even further’, and in continuing the tradition of excellence among the nation’s youth.

Before closing, Grange shared a word of encouragement with the poetry competition awardees:

‘Undoubtedly, we are at a pivotal moment in world history, and we know that above all, the preservation and proliferation of the stories which define us are of great importance.’

The Minister lauded the work of the team of the National Library of Jamaica as well.

‘In any society, active citizens require solid institutions which foster continued growth and development, and the National Library of Jamaica, which is our ‘Library of Congress’, in pursuing its mandate has been a formidable cultural institution under the MCGES. Sound governance and creative ingenuity have advanced the function of the Library in a technologically evolving world.’

Most significant of her tenure, Goodison spearheaded the All Flowers Are Roses programme, with the support of corporate sponsors and under the administration of the NLJ.

This initiative took place over three years and saw to the training of hundreds of children across Jamaica’s three counties in poetry and self-defence skills, directly tackling the threat of human trafficking and child abuse.

Goodison graciously responded by reflecting on her own tender beginnings in poetry.

She concluded in saying ‘…in considering the appointment, I thought, here I would have a chance to do for young Jamaican poets what was done for me… People need to know that they have some kind of hope and possibility and that is what I tried to [achieve] with this programme.’

Lorna Goodison is Professor Emerita of poetry at the University of Michigan. As a proud Jamaican woman, she has produced numerous collections of works in Jamaican poetry and prose which have gained local and international acclaim. In 2020 she was bestowed with the gold medal for poetry from Queen Elizabeth II of the United Kingdom and has been elected an international honorary member of the American Academy of Arts and Science. She is a graduate of St Hugh’s High School, the Jamaica School of Art, and the Art Students League in New York.