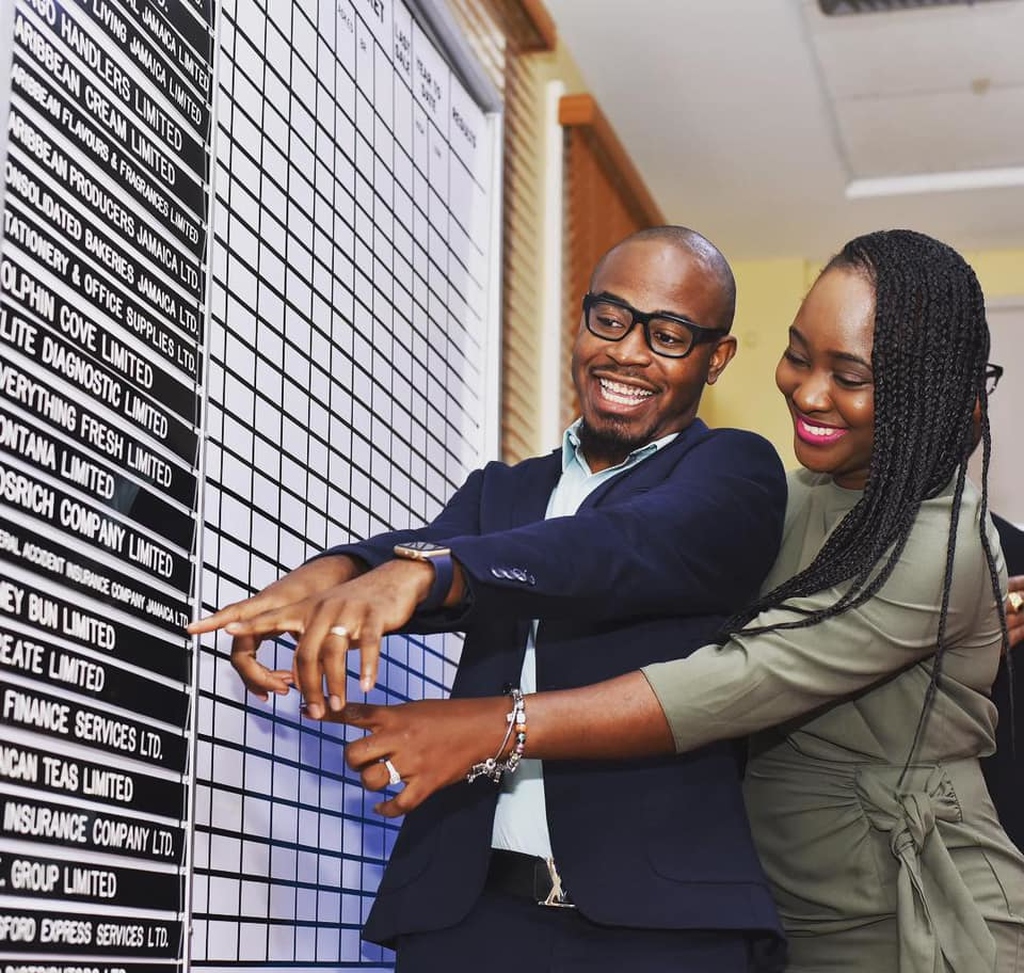 Tyrone Wilson (left), Founder & President of iCreate Institute and his wife Meisha-Gay Mattis Wilson point to the JSE trading board in celebration of the training institute's junior market listing.

Training institute, iCreate recorded revenues of $41.4 million for the nine months to September 30, 2019, an increase of 41 per cent when compared to the corresponding period in 2018.

Headquartered at 72B Hope Road, Kingston the company is a subsidiary of eMedia Interactive Group Limited. Its principal activity is to develop and deliver degree and certificate courses to students in the creative field, such as advertising, film, animation, graphic design, mobile games, fashion design and more.

iCreate which listed on the Junior Market of the Jamaica Stock Exchange on February 25, 2019, raised $70 million via its IPO.

The company has been engaged in infrastructure expansion including the physical build-out of campuses in Kingston and Montego Bay.

Directors note in the previous quarters report that since the IPO, the company has added approximately 1,500 sq ft of training space, in addition to increasing the amount of training equipment to satisfy the demand being experienced at the Kingston location.

Demand, they note, is being driven mainly by creative courses (photography, video production & graphic design etc) which it said were oversubscribed during June quarter.

In Montego Bay, iCreate outfitted another 1,500 sq. ft of training space to get operations underway and started a cohort for the Digital Marketing programme. The expanded space, directors said, will give them the opportunity to roll out a number of new courses, which will be important to growing the business

Specific enrollment numbers were not shared.

iCreate said the  Montego Bay location is growing, moving from four per cent of the total student population in Q2 2019 (April to June), to 21 per cent in the quarter ended September.

The third-quarter results (July to September) recorded revenues of $16.37 million, 69 per cent higher than the corresponding period, September 30, 2018, and a 25 per cent increase when compared to the second quarter of 2019.

Of total revenues, the business to consumer (B2C) market is strongest, showing a 50 per cent increase when compared to the previous quarter ending June 30, 2019.

Net losses for the quarter amounted to $3.17 million as against the $0.650 million for the similar period last year, however, 60 per cent below the $7.85 million recorded in the second quarter.

Over 100 people get certificates, diplomas from iCreate/UCC