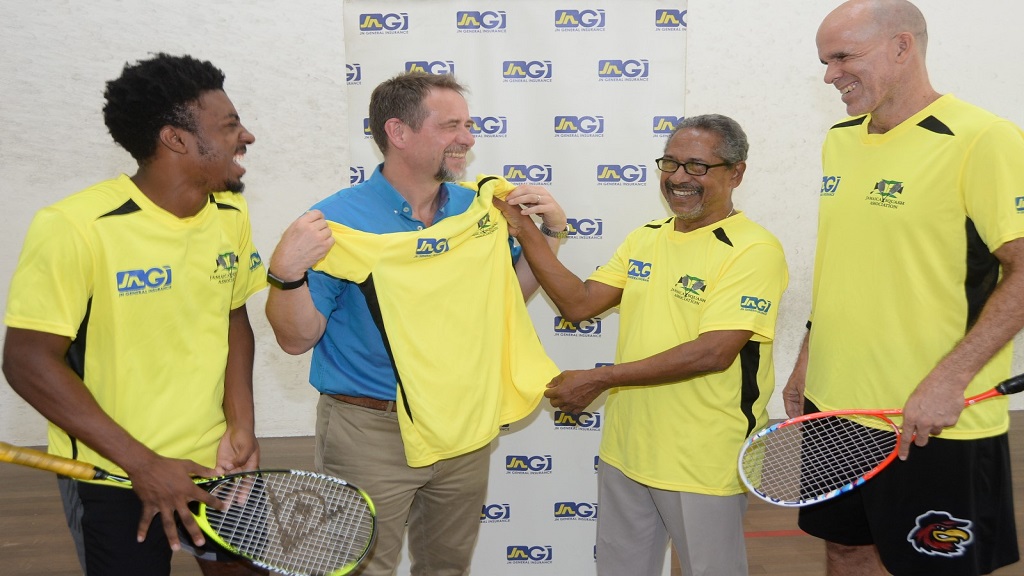 CEO of JN General Insurance, Chris Hind, (2nd left) and Team Manager, Douglas Beckford (3rd left) pose with a competition shirt during a presentation ceremony at the Liguanea Club in Kingston on Thursday, August 15 just ahead of the departure of Jamaica's squad for the 2019 Caribbean Area Squash Association’s Senior Championships in Guyana. Also involved in the presentation are Players Tahjia Lumley (left) and Stuart Maxwell (right).

JN General Insurance (JNGI) has underscored its commitment to local squash by assisting the senior national team to attend the Caribbean Area Squash Association’s (CASA) Senior Championships scheduled for August 17 to 24 in Guyana.

Financing from the insurance company will help to defray the cost of travel, accommodation, and uniforms for the eight-man squad which is expected to have a major impact at the prestigious competition.

Headlining the team is the reigning All Jamaica and Caribbean champion, Chris Binnie who is in pursuit of his ninth regional title.  Binnie, who currently holds the records for winning the most Caribbean championships both collectively and consecutively, has not lost a match at the tournament since 2011.

Among those looking to unseat him will be his longtime teammate Bruce Burrowes and former All Jamaica Junior champions, Tahjia Lumley and Julian Morrison, who are each eager to claim a senior regional title.  Also in mix is former All Jamaica men’s champion, Dane Schwier whose extensive experience should work in his favour.

The red-hot squad is also favoured to win the ultra-competitive team competition and reclaim the highly coveted trophy Jamaica last held in 2015.  Jamaica will also be represented by veteran players Richard Coe, Stuart Maxwell and Douglas Beckford who will contest the over 40, over 50 and over 60 categories, respectively.

“There is considerable excitement about this year’s Senior Caribbean Championships because we are fielding one of the strongest teams we’ve sent in recent years and in addition to the strong possibility of Chris Binnie winning his ninth title, the team could also come out on top and so expectations are high for this tournament,” said Team Manager, Douglas Beckford.

CEO of JN General Insurance, Chris Hind said, “JNGI has become a major supporter of Jamaican squash and we are pleased with how well the teams and individual players continue to perform locally and overseas. But the anticipation this year takes me back to 2015 when we sponsored the team that pulled off the double with Chris Binnie winning the individual men’s title and the squad taking the team title; and certainly hope the guys can repeat that feat this time around.”