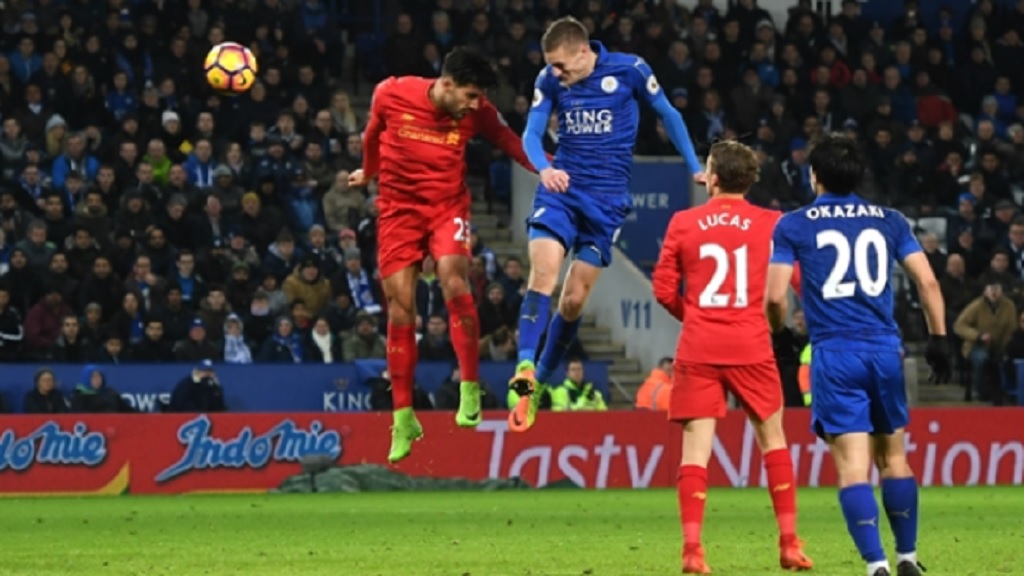 Leicester City visit Anfield with Vardy having scored seven times in the Premier League against the Reds in his career.

The former England international is more prolific against Liverpool than any other club and he broke the deadlock in the same fixture on Merseyside last season, although Mohamed Salah's brace earned Liverpool a 2-1 win.

Vardy also memorably profited on a Lucas Leiva error to score against Liverpool in September 2016 and Klopp knows his defence will have to be on form to stop the striker finding the net again.

"He's quality, the speed he has and the finishing skills he has," Klopp told reporters on Tuesday. "A few times we made it easy for him - Lucas Leiva, did he get an assist for that goal? So I would have scored that goal!

"But Jamie is a fantastic striker really, each fibre of his body is on this decisive situation. He always waits for the ball over the shoulder and is always more involved in defending than in the past, but this doesn't make it easy to defend against him.

"He's a massive threat to be honest but he's not the only one in that team. [James] Maddison - really, really good player. Not only from set pieces, a fine footballer. [Demarai] Gray, [Ricardo] Pereira, a lot of really quality players. [Marc] Albrighton. Experienced and in tune with all the other players, or very skilful and quick. Having [Ben] Chilwell make the left flank up and down, it makes it all interesting.

"I don't know why Jamie has such a good record against us. I would say minus one goal because that was the only one I thought he shouldn't have scored.

"The best one I think he scored when they won the title, he got the ball on the halfway line and shot pretty much [immediately], yeah that was a good year for them. Very, very good player and that's the main reason why he is such a threat."

Klopp has defensive injury issues for the Leicester game with Joe Gomez and Trent Alexander-Arnold ruled out, Fabinho and Virgil van Dijk doubts and makeshift right-back James Milner suspended, although Dejan Lovren has been passed fit.

But he was unwilling to give those attending the pre-match news conference any clues as to how he will fill Liverpool's problem position of right-back, with his lack of options exacerbated by Nathaniel Clyne being allowed to join Bournemouth on loan.

"You have to wait until tomorrow," Klopp replied when asked who will play at right-back. "Fantastic question - even better answer!

"We will play with a right-back. Or a wing-back. Wow. Ooooooh. I don't know, I have no clue what we are doing to be honest."

Liverpool's lead at the top of the Premier League will be cut to a point by Manchester City if they win at Newcastle United on Tuesday.

But Klopp does not feel the fact City play each of their next two fixtures before Liverpool will be a decisive factor in the title race.

"For me, no difference. If we win the game, we are not interested in other results. How can we change the approach?" he continued.

"I can only speak for myself, but I don't sit in front of the TV and think [damn] when they score or whatever. I really believe that you have to do your own work, your own job, if you want to have something.

"Don't be concentrated on other teams, it doesn't help. I expect to be one point up before the game tomorrow, and that doesn't bother me."