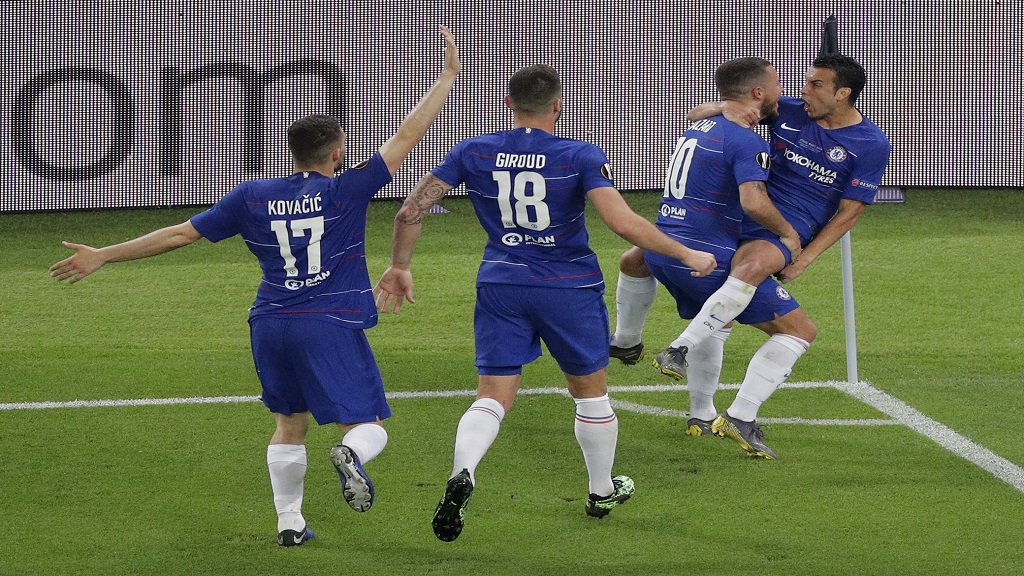 Chelsea's Pedro Rodriguez, right, celebrates with teammates, from left, Mateo Kovacic, Olivier Giroud and Eden Hazard after scoring his team's second goal during the Europa League Final against Arsenal at the Olympic stadium in Baku, Azerbaijan, Wednesday, May 29, 2019.

In perhaps his final appearance before a mooted move to Real Madrid, star man Hazard struck two second-half goals to confirm Chelsea's second triumph in six seasons in this competition.

Olivier Giroud sparked the landslide against his former employers in the 49th minute before Pedro put a second past retiring Gunners goalkeeper Petr Cech.

Alex Iwobi pulled one back in between Hazard's double but Arsenal faded horribly after half-time and, having finished fifth in the Premier League, are now consigned to another season outside the Champions League.

Kepa Arrizabalaga exuded nerves early with a poor punch and was fortunate that referee Gianluca Rocchi overlooked a slight touch on Alexandre Lacazette when the forward went to ground in the 18th minute.

Cech, Chelsea's keeper in their 2013 success, appeared a picture of calm at the other end.

The 37-year-old parried an Emerson Palmieri shot and then brilliantly clawed away Giroud's angled effort.

He could do little to stop the striker a second time, however, with World Cup winner Giroud stooping to nod in Emerson's cross from the left.

Arsenal's encouraging start had fallen apart and Hazard teed up Pedro to slide in Chelsea's second with an hour played, before Ainsley Maitland-Niles bundled into Giroud's back.

Chelsea's talismanic Belgian made no mistake from the resultant spot-kick, although substitute Iwobi momentarily give Unai Emery's men a glimmer of hope courtesy of a thunderous volley.

But the ex-Sevilla coach's bid for a fourth Europa League crown was shattered within three minutes, Hazard capping off a classy combination with the tournament's top scorer Giroud to complete the humiliation.

Knockout rounds victories over Napoli and Valencia en route to Azerbaijan gave rise to a suspicion that Europa League expert Emery would lift the trophy for the fourth time.

Instead, Arsenal collapsed in the second half, offering little resistance and giving up their last route into next season's Champions League.

That spot now goes to Ligue 1 side Lyon courtesy of coefficient rankings.

Giroud gets better of Gunners

Cech was Arsenal's shining line in a wretched team performance but he alone could not quell an inspired Giroud. The former Emirates Stadium favourite was the catalyst in turning the final in Chelsea's favour, breaking the deadlock with a quintessential centre-forward's header and then playing a part in two more goals.

There were holes aplenty in Arsenal's defence and, as leader, Laurent Koscielny must accept a large portion of blame. The experienced centre-back lost his compatriot for the opener and questions will be asked of his future in London.

Hazard appears certain to head to LaLiga, pending Chelsea's approval. Resolving that matter and Juventus-linked Sarri's future are time-sensitive priorities for Blues owner Roman Abramovich heading into a transfer window in which his club have their hands tied.

As for Arsenal, there is much work to be done on a squad that still struggles in big occasions and in the face of adversity.