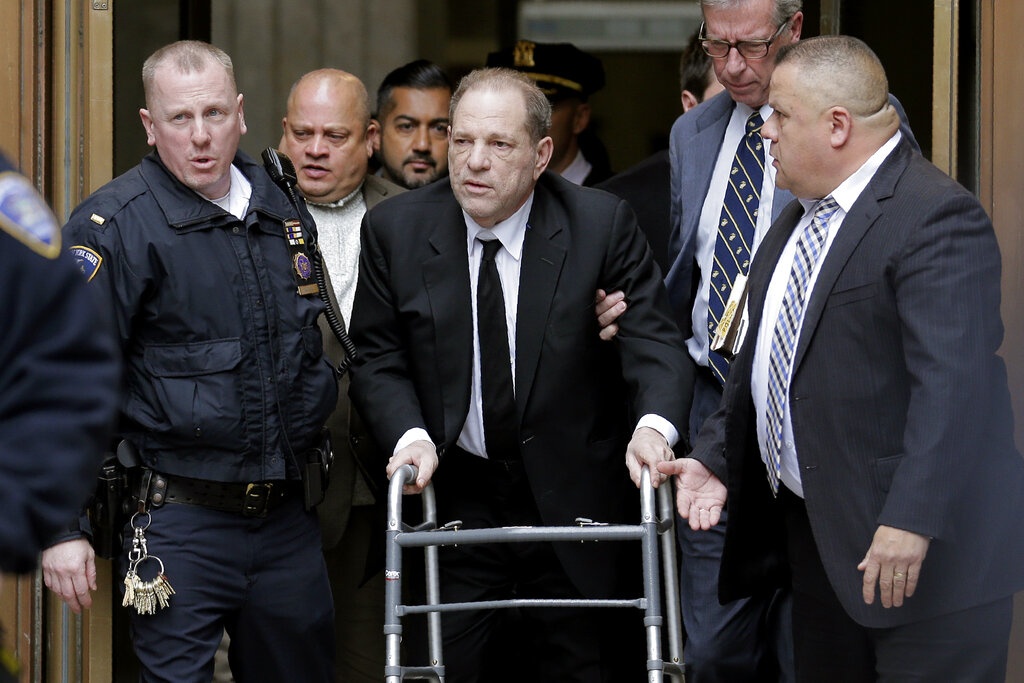 Harvey Weinstein has been indicted on new sex crime charges in Los Angeles, just as his trial on separate rape and sexual assault charges in New York was poised to get underway, prosecutors announced Monday.

The Hollywood mogul has been charged with raping one woman and sexually assaulting another in separate incidents over a two-day period in 2013, Los Angeles County District Attorney Jackie Lacey said in a news release.

“We believe the evidence will show that the defendant used his power and influence to gain access to his victims and then commit violent crimes against them,” Lacey said in a statement. “I want to commend the victims who have come forward and bravely recounted what happened to them. It is my hope that all victims of sexual violence find strength and healing as they move forward.”

Weinstein allegedly raped a woman in a hotel room on February 18, 2013, after he pushed his way inside her room, prosecutors said. The next night, he allegedly sexually assaulted a woman in a Beverly Hills hotel suite. That woman is expected to testify at Weinstein's trial in New York. The charges took more than two years to file because the women were reluctant to provide all the information necessary, according to Lacey.

The Los Angeles district attorney’s task force is still investigating sex crime allegations against Weinstein from three women, Lacey said. Prosecutors declined charges involving three other women because their cases were beyond the statute of limitations.

Weinstein faces up to 28 years in state prison if he is convicted of the charges filed in L.A.: forcible rape, forcible oral copulation, sexual penetration by use of force and sexual battery by restraint. His arraignment has not yet been scheduled and prosecutors will recommend $5 million bail. Weinstein is expected to appear in court in California after his trial in New York is finished, Lacey said. 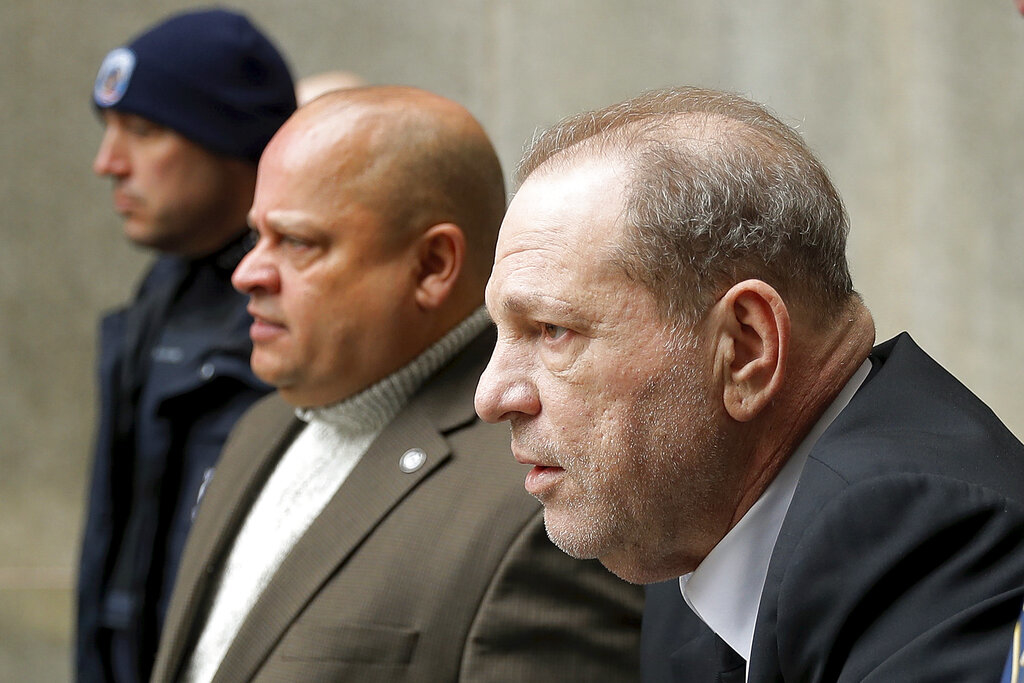 Lawyers for Weinstein had no immediate response to the new charges.

Lacey said there was no relationship between the timing of the New York trial and the filing of charges in Los Angeles. She said the filing and announcement came on the first business day all the necessary people could be gathered for the charges and announcement.

But that meant the dramatic announcement came the same day that Weinstein and several of the women who have accused him of sexual misconduct converged Monday at the New York City courthouse where a judge and his lawyers handled the final preparations for his high-stakes trial on charges of rape and assault.

Speaking at the New York courthouse Monday prior to the announcement, Weinstein’s attorneys suggested they knew charges might be coming. They asked the judge for potential jurors to be sequestered partly because of the possibility that charges could be brought elsewhere against Weinstein while the trial was ongoing. The denied that request.

“There is a potential L.A. situation going on,” his lawyer, Donna Rotunno, told reporters after the hearing.

“We don’t know what is going to happen. We’re hoping not,” added another of his lawyers, Damon Cheronis. “We have no control over what happens in Los Angeles or anywhere else.” 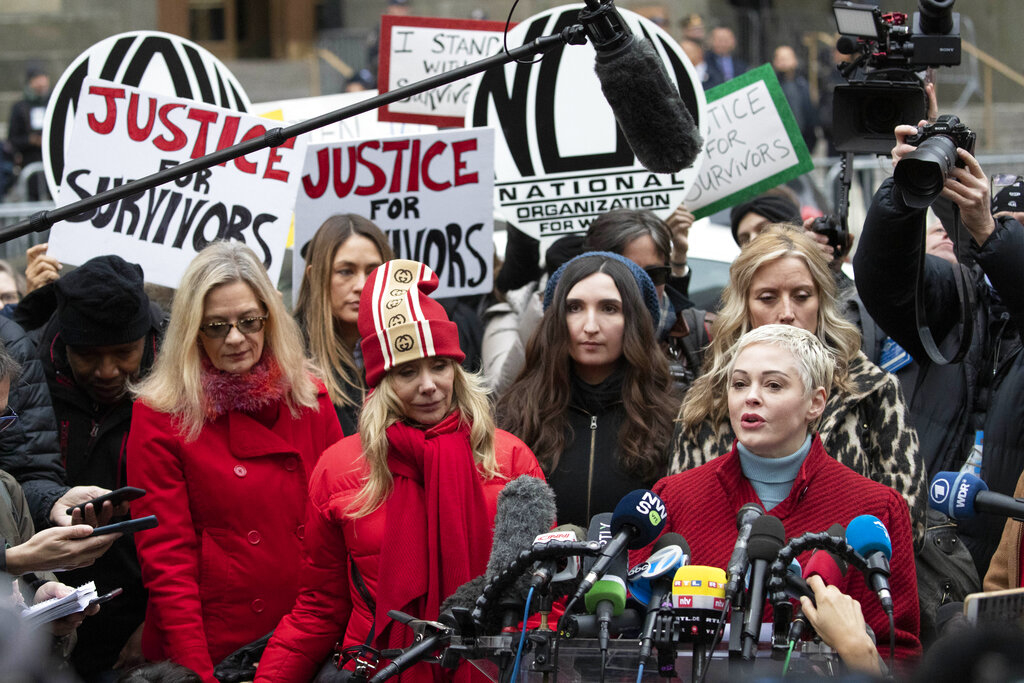 Earlier Monday, Weinstein, 67, entered the courthouse in New York leaning on a walker following a recent back surgery. When asked outside the courtroom how his back felt, Weinstein responded with a thin smile and a so-so gesture with his hand.

Inside, his lawyers and prosecutors spent the morning sparring about procedural matters, including how to keep publicity surrounding the trial from influencing the jury's thinking.

In a brief hearing, the judge declined to gag Weinstein's attorneys from speaking to the media — in addition to denying the motion to sequester jurors. The judge also turned down a defense request to call as a witness a police detective who had been accused of mishandling part of the case.

Across the street, actresses and other women who say they were sexually harassed or assaulted by Weinstein dismissed him as a villain undeserving of anyone's pity.

“He looked cowardly. He wouldn’t look at us. He wouldn’t make eye contact,” said Sarah Ann Masse, a performer and writer who said Weinstein once sexually harassed her in his underwear during a job interview. "This trial is a cultural reckoning regardless of its legal outcome," she said.

Jury selection in the trial will start Tuesday, more than two years since the allegations first came to widespread public attention and catalyzed the #MeToo movement.

Weinstein's lead lawyer, Donna Rotunno, said she was hopeful a fair jury could be found that wouldn't pre-judge the case.

“In this great country, you are innocent until proven guilty,” she told reporters outside the courthouse.

Weinstein faces allegations that he raped one woman in a Manhattan hotel room in 2013 and performed a forcible sex act on a woman, Mimi Haleyi, who had come to him seeking film work in 2006.

He has pleaded not guilty and says any sexual activity was consensual. If he's convicted of the most serious charges against him, two counts of predatory sexual assault, Weinstein faces a mandatory life sentence.

For that to happen, prosecutors must demonstrate Weinstein had a habit of violating women, beyond the two directly involved in the encounters in which he's charged. To that end, they plan to call actress Annabella Sciorra, who says Weinstein forced himself inside her Manhattan apartment in 1993 or 1994 and raped her after she starred in a film for his movie studio.

They also wanted jurors to hear from a few of the more than 75 women who have come forward publicly to accuse Weinstein of sexual misconduct ranging from harassment to assault. The first allegations were brought to light by The New York Times and The New Yorker in October 2017.

Prosecutors got permission from the court to try to buttress their case with four other witnesses: Sciorra and three other accusers who haven't been named.

Speaking outside the courthouse as proceedings began, a group of Weinstein's accusers spoke with reporters, including Masse, the actresses Rosanna Arquette, Dominique Huett and Rose McGowan, model Paula Williams, Louise Godbold and the actress and journalist Lauren Sivan.

McGowan thanked the women who will testify during the trial as alleged victims for representing many more women who may never get their day in court.

“They are standing for us, and I am immensely proud of them,” she said. “We didn’t have our day. But hopefully they will. Their victory will be our victory. Their loss will be our loss.”

Rotunno has argued the case is weak and said she plans to aggressively cross-examine the accusers.

In court on Monday, prosecutor Joan Illuzzi immediately set a combative tone by referring to Weinstein as a "predator," drawing an objection from the defense table.

The lawyers also clashed after prosecutors asked the judge to bar all attorneys in the trial from speaking about the evidence outside court. Illuzzi accused Rotunno of “degrading and humiliating and putting down our witnesses” in statements to the press leading up to the trial.

"I have not degraded anyone," Rotunno responded.

Judge James Burke refused to issue a gag order, but told both sides: “Leave the witnesses alone, OK? Don’t talk about them in any way.”

The judge also barred the defense from calling detective Nicholas DiGaudio as a witness. DiGaudio was removed the investigation amid allegations he had withheld evidence that could have helped defend Weinstein.

Illuzzi revealed that prosecutors hope to use seven photographs from a trove of more than 70 images collected as evidence against the defendant. It was unclear what the photos show, but the prosecutor said: “We do think they're very important for the jury to see.”

Jury selection could could take two weeks or more, in part because of immense media attention on the case could mean some potential jurors already have their minds made up. Weinstein's lawyers tried to get the trial moved out of Manhattan, but a court rejected that.