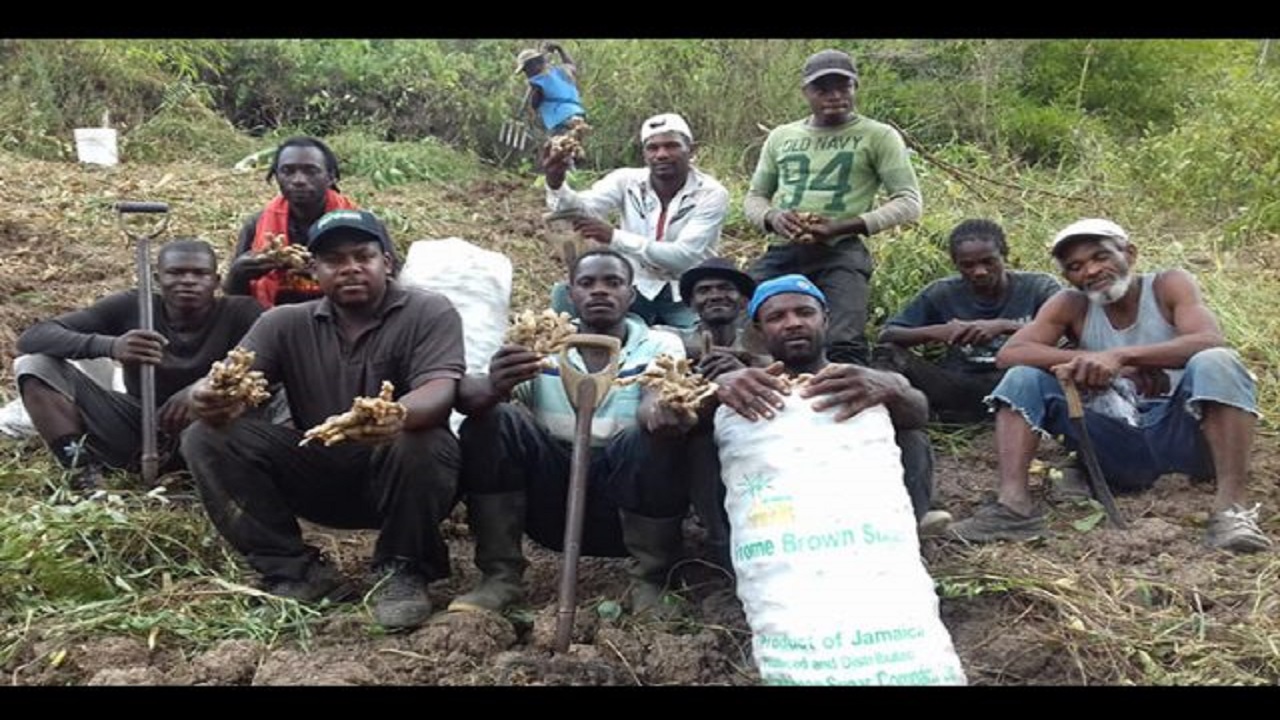 Nicholas Anderson (left, first row) proudly displays some of the 150,000 pounds of ginger he and his workers reaped two weeks ago at his farm in Reckford, Clarendon. Anderson, who employs 18 persons from his and surrounding communities, was named the Young Champion Farmer at the 2018 staging of the Denbigh Agricultural, Industrial and Food Show. He was also crowned Champion Ginger Farmer.

When Nicholas Anderson decided to venture into farming seven years ago, it was not his first career choice. But he has no regrets after taking this step into somewhat unfamiliar territory.

Through farming, which is his only source of income, Anderson has been able to sustain himself and his family, as well as create employment for 18 members of his and surrounding communities.

Even though he grew up in rural Jamaica with his grandparents who reared goats, the concept of farming was, strangely enough, still foreign to him - and it took sheer persistence in the field until he actually found his footing.

“It worked itself out… it chose me,” Andersen told JIS News.

When his first attempt at farming – rearing pigs – failed, he said he was not deterred. He instead focused intently on turning his next effort, a small plot of ginger, into what is now a thriving business.

It was this same tenacity that earned the 31-year-old from Reckford in Clarendon the coveted title of Young Farmer of the Year at the recent staging of the Denbigh Agricultural, Industrial and Food Show in May Pen, Clarendon, where Anderson was also crowned Champion Ginger Farmer.

“It’s a very good feeling to know that the recognition has been given to someone from the area I am from, which is a farming area. You never have anyone in my area who has risen to the level where I am at, at my age, so it’s a great feeling for me. It’s a great accomplishment,” he said.

Although he now cultivates other crops, including scotch bonnet pepper, cabbage, yam and dasheen, Anderson noted that “the real start was with ginger” back in 2011 when he heard about the Agriculture Ministry’s Export Division ginger supply programme. This involved farmers growing and selling their ginger crops to the ministry’s export division to supply the Japanese market.

He continued on this trend of reinvesting in the business until he now harvests tens of thousands of pounds of ginger during reaping season. Just two weeks ago, Anderson reaped more than 150,000 pounds of ginger.

The ambitious young man, who works along with his uncle, now operates his farm on 16 acres of land, a parcel of which is leased, and some owned by his grandfather. He is now seeking another 20 acres of land to expand his cultivation of scotch bonnet peppers.

The Stacyville All-Age and Kellits High School alumnus noted that while farming has “its ups and downs”, with various challenges, including praedial larceny and unfavourable weather, if given the option, he would do it all over again.

Anderson said since this year, praedial larcenists stole from one of his ginger field five times, taking 40 pounds of the produce the first time they struck. In total, they have made away with some 300 pounds, resulting in losses of some $90,000.

But undaunted, the young farmer said while being wary of the thieves, whom he says target his ginger crop because it is the most valuable of his produce, he just has to stay a step ahead of the crooks “and dig it fast”.

He noted that while last year was a good season in terms of the weather, it has been “very rough” this year due to the prevailing drought, which has had a negative impact on his yields.

“That’s one of the things that really fight me the most, but, you know, I hold on. Some of the years I don’t make any money… we just get back what we planted,” he said.

Anderson expressed gratitude for the assistance he has received throughout the years, which has helped him to improve on his farming techniques, and, in turn, boost his yields. Of note, he said, is the technical support he receives from the Government through the Rural Agricultural Development Authority (RADA).

He said while he was not able to benefit from all the training opportunities the agency offers, due to his busy schedule, he is appreciative of the knowledge he has garnered from the sessions he has attended. He noted as well that he works closely with the RADA extension officer who has been assigned to him.

Anderson has also been the beneficiary of fertiliser from the Government, through RADA. He was given some following Denbigh this year and also received some the previous two years after the staging of the annual show.

The young farmer, who currently sells his produce to a processor in St Ann, as well as higglers and hotel and supermarket suppliers, said he also harbours hopes of expanding his business and leaving a legacy for his six-year-old son.

He added that he would love to get directly into the supermarket and hotel markets, “which carry a much better price…; it would make a whole lot of difference”.

Anderson said he is happy he remained persistent, and he continues to cultivate the land, as it has not only empowered him to help others, but he has even surprised himself and proven that with true grit comes great rewards.

“Where I am at in farming now, to be frank with you, I didn’t expect it… I am well grateful and well pleased,” he said.

‘Coffee-liser’ being rolled out to local farmers