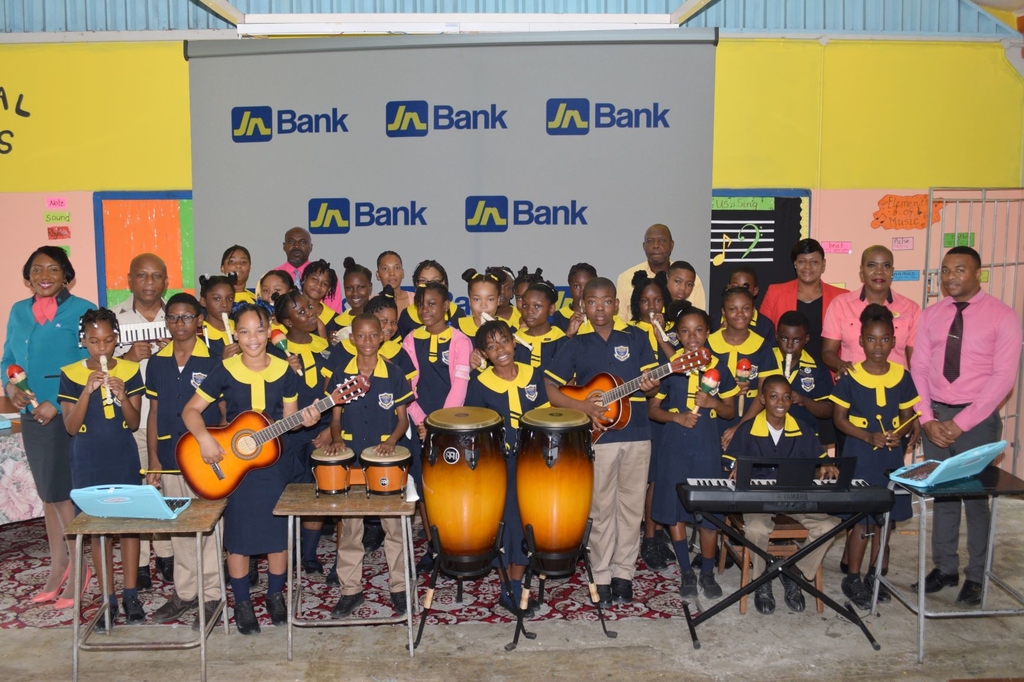 Students from Hague Primary and Infant School show off the instruments.

“Music gives a soul to the universe, wings to the mind, flight to the imagination and life to everything.” – Plato, Athenian philosopher.

That was the intention of Dameian Elvin, principal of the Hague Primary and Infant School, when he solicited the assistance of the JN Bank Member Advisory Council (MAC) to procure musical instruments for the school, which is located in Falmouth, Trelawny.

“We are located in a diverse community, hence, we have children from informal settlements and the middle class. Therefore, we believe that music would be the ultimate instrument to bridge that divide. By bringing the children into one space and showing them that life is limitless, in terms of the opportunities that music offers,” he related.

Elvin said the gift was timely, as, over the past three years, his staff members have been exploring how they can improve the contributions to inspire the children, and the music was one of the suggestions which emerged.

“We decided that we would go out on a limb, to determine how best we could impact the lives of our children and change their outlook in terms of music,” he said.

The principal said he was happy when JN Bank came on board and assisted the school with the initiative. The school received guitars, drums, and a xylophone, and various other instruments. 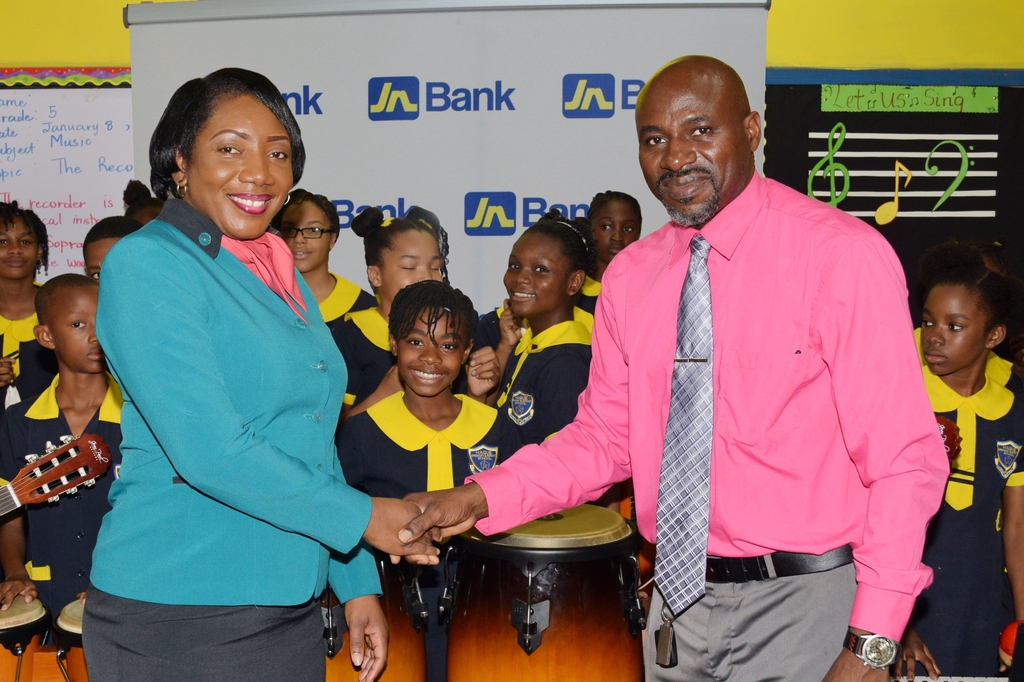 Marshalee Walcott- Lawrence (left), credit writer, JN Financial Services, Catherine Hall shakes hands with Dameian Elvin, principal of the Hague Primary and  Infant School after handing over music instruments to the school in Trelawny, recently. The instruments were presented to the school under the JN Bank Member Advisory Council.

The students were ecstatic about the instruments, Elvin related and he is hopeful that this intervention will assist to change their mind-set.

“Once they begin to tap into music, it is as if they will automatically begin to think and act differently; hence, we believe that this is an opportunity to touch the lives of these children,” he said.

Established in 2005, the institution has been holding its own, in terms of academics and the performing arts; and last year, was the national champion of the Petroleum Corporation of Jamaica’s Jingle Competition.

With a school population of 1,090, Hague Primary and Infant School serves the communities of Rock, Falmouth, Zion, Martha Brae and other surrounding areas.

“The Member Advisory Council, which transitioned into the JN Circle, donated musical instruments to Hague Primary and Infant School. That was indeed a feel-good moment for us here in Falmouth. Already, we are seeing success emerging from our donation to the school and the community at large; and it is our hope that music will continue to have a positive influence on their future,” she said.

The JN Bank MAC, formerly known as the “Branch Advisory Councils,” were established in 2006, to provide JN members with the opportunity to engage directly in the identification and selection of projects, to positively impact negative issues in the communities where they are located.

Over the years, the MACs implemented numerous projects in communities across the country. Today, with the establishment of the JN Circle, the activities of the MAC will be subsumed into the JN Circle, a national network of service clubs. These clubs are empowered by Jamaica National to advocate for change and strengthen the communities in which its bank and other JN corporate entities operate.