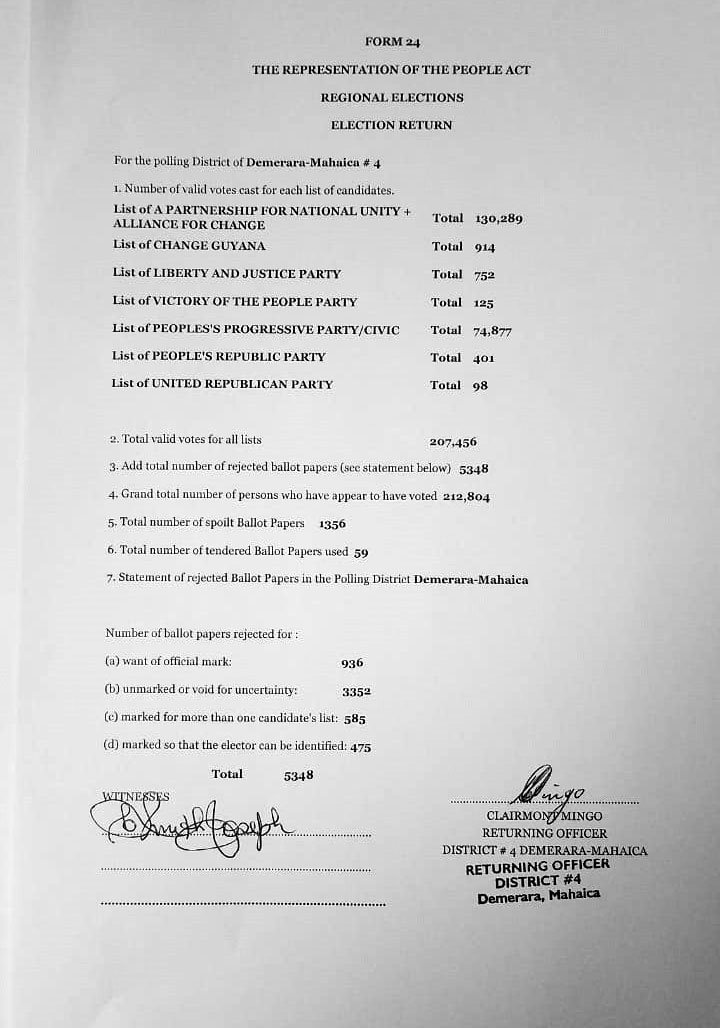 The ruling A Partnership for National Unity+Alliance For Change (APNU+AFC) coalition in Guyana has won the March 2 Regional and General Elections.

This comes after the Returning Officer (RO) for Region Four Clairmont Mingo declared that APNU+AFC won the district with 136,057 votes, compared to 77,231 for the People’s Progressive Party/Civic (PPP/C) in the General Elections.

The declaration was made late on Friday night.

The margin of victory in Region Four was great enough to close the over 50,000 vote gap between the coalition and PPP/C.

Mingo’s tabulation was starkly different from what he controversially declared on March 5.

That declaration was later scrapped by Chief Justice Roxanne George-Wiltshire who ordered him to either restart or continue the tabulation process since he did not complete all of the Statements of Poll.

Chief Elections Officer Keith Lowenfield must now compile a report to submit to Commissioners of the Guyana Elections Commission (GECOM) for deliberation.

Following the announcement, APNU+AFC said: “Democracy and the rule of law have prevailed.”

In a statement, the coalition said: “The District 4 declarations now pave the way for GECOM to make a full and final declaration of the elections held in all ten electoral districts.”

“The APNU+AFC Coalition commends the staff of GECOM for their strength and fortitude in the face of intimidation, threats, attacks and assault. Democracy in Guyana has prevailed even as it came under threat by forces bent on derailing the process.”

They have called on all political leaders to “demonstrate maturity.”

Meanwhile, the PPP/C said this latest declaration is a case of electoral fraud since only Carol Joseph of the APNU+AFC to sign the declaration as a witness.

The PPP/C said: “This is a clear attempt to obfuscate the conspiracy between the PNCR-led APNU+AFC Coalition and complicit GECOM officials – a conspiracy to perpetrate electoral fraud – which led to the signature of Volda Lawrence appearing on last week’s fraudulent declaration for Region 4.”

“The fact remains that in ALL nine other Regions, only the stamp and signature of the Returning Officer was on the official declarations of election results in those areas. This move will not absolve those implicated in the private criminal charges that have been filed with the court.”