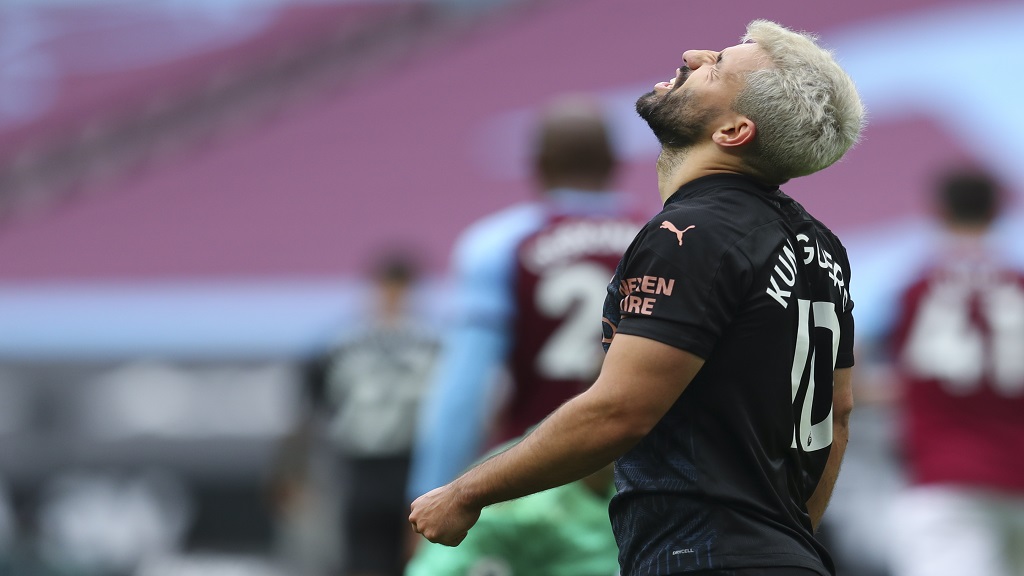 Manchester City boss Pep Guardiola regrets not buying a striker in the last transfer window after confirming Sergio Aguero could be missing for up to a month.

Aguero sustained a hamstring injury in City's 1-1 draw with West Ham last weekend and will not be involved in their Champions League Group C clash with Marseille on Tuesday.

With Gabriel Jesus also absent, recovering from a muscle injury he picked up on the opening day of the Premier League season, City are short of striking options.

When asked if he regretted not strengthening his forward line before the window shut, Guardiola acknowledged it would have been preferable but that they were unable to free up funds.

"Maybe, yes. We considered it, we thought about it, but we could not," Guardiola said at a news conference on the eve of City's match in the south of France.

"If you decide to buy a striker, it has to be a striker in the league of Gabriel and Sergio, but we cannot afford it.

"I am not saying the club didn't want to do it in terms of strikers, they want to make as strong a team as possible. Sergio is back [out injured], and I didn't expect Gabriel to be injured. Sometimes it happens."

Guardiola could not give an exact time frame on Argentina international Aguero's return but revealed City's all-time leading goalscorer could be facing up to a month on the sidelines.

The City boss also dismissed suggestions Aguero was rushed back too quickly following surgery on a knee problem before the new season started.

He continued: "Sergio was injured last game. And you know, when you're four or five months out with knee problems, you are at risk.

"We didn't rush him back. We were incredibly patient, didn't force the doctors. Of course, we knew he was not in the best condition.

"But he was important against West Ham for 55, 60 minutes. Unfortunately, one action in the first half, he was unlucky, went to stop a long pass and he felt something. Hopefully, he recovers as well as possible.

"We tried to manage it as good as possible, but it was not enough to maintain it. We hope he will be back as soon as possible.

Guardiola, meanwhile, would again not be drawn on whether the club has started to open talks with Aguero over a new contract.

The 32-year-old's deal is set to expire at the end of the season but recent injury problems have cast doubt over his City future.

"I don't know, I don't want to talk about it because I am not involved with this," Guardiola added.

"If I should be involved in contracts, maybe the day should be 48 hours, not 24! What I want is for Sergio to be fit, what I want is Sergio [to] come back again, be ready as much as possible.

"We miss him a lot. What he has done for this club is outstanding, [he] will be a legend of this club, we want to enjoy him before but it depends on his physicality and his physical condition."