Groups sow doubt about COVID vaccine before one even exists 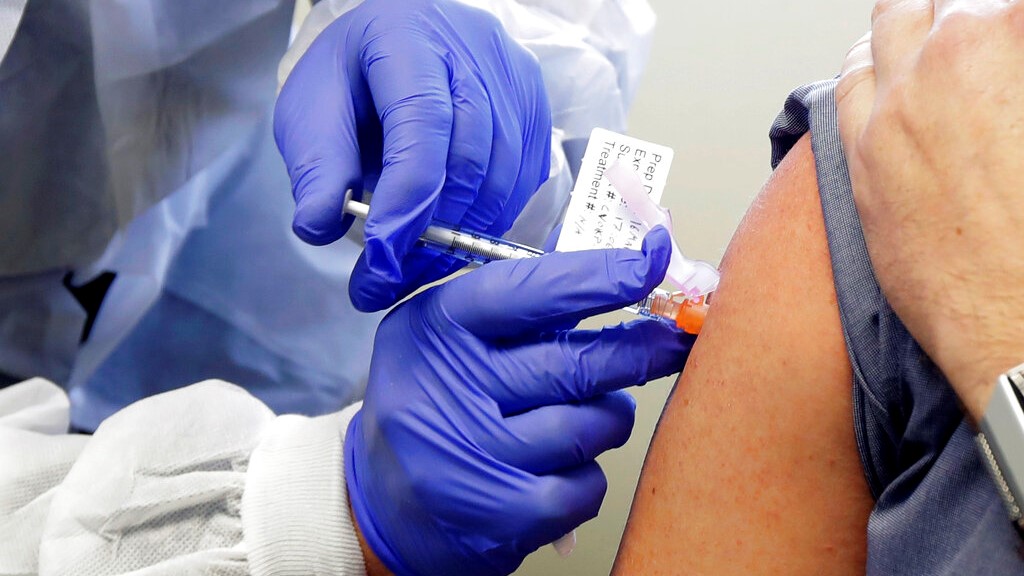 In this March 16, 2020, file photo, a patient receives a shot in the first-stage safety study clinical trial of a potential vaccine for COVID-19, the disease caused by the new coronavirus, at the Kaiser Permanente Washington Health Research Institute in Seattle. (AP Photo/Ted S. Warren, File)

A coronavirus vaccine is still months or years away, but groups that peddle misinformation about immunisations are already taking aim, potentially eroding confidence in what could be humanity's best chance to defeat the virus.

In recent weeks, vaccine opponents have made several unsubstantiated claims, including allegations that vaccine trials will be dangerously rushed or that Dr Anthony Fauci, the nation's top infectious diseases expert, is blocking cures to enrich vaccine makers. They've also falsely claimed that Microsoft founder Bill Gates wants to use a vaccine to inject microchips into people — or to cull 15% of the world's population.

Vaccine opponents in the US have been around for a long time. Their claims range from relatively modest safety concerns about specific vaccines or the risk of side effects to conspiracy theories that border on the bizarre.

The movement is receiving renewed attention, especially as it aligns itself with groups loudly protesting restrictions on daily life aimed at controlling the spread of the virus. Health professionals say vaccine misinformation could have lethal consequences if it leads people to opt for bogus cures instead.

"Only a coronavirus vaccine can truly protect us from future outbreaks," said Dr Scott Ratzan, a physician and medical misinformation expert at the City University of New York and Columbia University. "But what if the effort succeeds and large numbers of people decide not to vaccinate themselves or their children?"

While vaccines for diseases such as polio, smallpox and measles have benefited millions, some skeptics reject the science, citing a distrust of modern medicine and government. Others say mandatory vaccine requirements violate their religious freedom.

Rita Palma, the leader of the anti-vaccine group in Long Island called My Kids, My Choice, is among those who say their families won't get the coronavirus vaccine.

"Many of us are anxiety stricken at the thought of being forced to get a vaccine," Palma said. "I will never choose to have a COVID-19 vaccine. I don't want the government forcing it on my community or my family."

From the outset of the coronavirus pandemic, vaccine skeptics have tailored several long-standing claims about vaccine safety to fit the current outbreak. When the first US case was announced in January, some alleged the coronavirus was manufactured and that patents for it could be found online.

Thousands of deaths later, vaccine opponents are endorsing unapproved treatments, second-guessing medical experts and pushing fears about mandatory vaccinations. They've also latched onto protests against stay-at-home orders in the US

"The coronavirus has created this perfect storm of misinformation," remarked David A. Broniatowski, an associate professor at George Washington University's school of engineering and applied science who has published several studies on vaccine misinformation.

Last week, an anti-vaccine activist was arrested in Idaho after repeatedly refusing police orders to leave a playground closed because of the pandemic. The woman, who was there with other families, is affiliated with two groups that protested at the Idaho Statehouse against stay-at-home orders.

Facebook groups formed to organise the protests have been peppered with vaccine hoaxes and myths. Perhaps no one plays a bigger role in the conspiracy theories than Gates, who is funding vaccine research. The online movement has centred concerns around a COVID-19 vaccine on false claims that Gates is planning to microchip people with the vaccine or use it to reduce the world's population.

Such wild theories can have real-world effects. False rumours that Gates hoped to test an experimental vaccine in South Africa became mainstream after a news site erroneously reported the claim. One of the country's political parties then sent a letter to President Cyril Rampahosa demanding answers about "deals" struck with Gates.

In fact, Gates and his wife are financing a vaccine trial in Philadelphia and Kansas City, Missouri, not South Africa. He also suggested creating a database of people immune to the virus, not implanting microchips.

On Monday, during remarks recognising World Immunisation Week, World Health Organisation Director-General Tedros Adhanom Ghebreyesus criticised vaccine skeptics for spreading misinformation at a time when many families are delaying or skipping routine childhood immunisations because they are afraid of COVID-19 exposure in doctors' offices.

"Myths and misinformation about vaccines are adding fuel to the fire," he said.

Health experts have repeatedly said there is no evidence the coronavirus was intentionally created or spread. They also insist that vaccines are not only safe, but essential to global health.

"Vaccine researchers and anyone who is a vaccine advocate cares deeply about vaccine safety," said Dr Paul Offit, a Children's Hospital of Philadelphia physician and co-inventor of a vaccine for rotavirus, which kills hundreds of thousands of children annually.

For most people, the coronavirus causes mild or moderate symptoms, such as fever and cough, that clear up in two to three weeks. But it can cause more severe illness, including pneumonia, and death for some people, especially older adults and people with existing health problems.

The vaccine debate is fertile ground for groups looking to sow discord in the United States. Russia seized on it to create divisions before the 2016 US election, and appears to be at it again.

A report from a European Union disinformation task force found numerous conspiracy theories in English-language Russian media, including state-run RT, claiming an eventual vaccine will be used to inject nanoparticles into people.

"When pro-Kremlin disinformation outlets spread anti-vaccine tropes, they become responsible for those who will hesitate to seek professional medical care," the EU report said.

Coronavirus: Tokyo Olympics 'will be scrapped' if 2021 is unfeasible

Osaka out of French Open due to hamstring injury