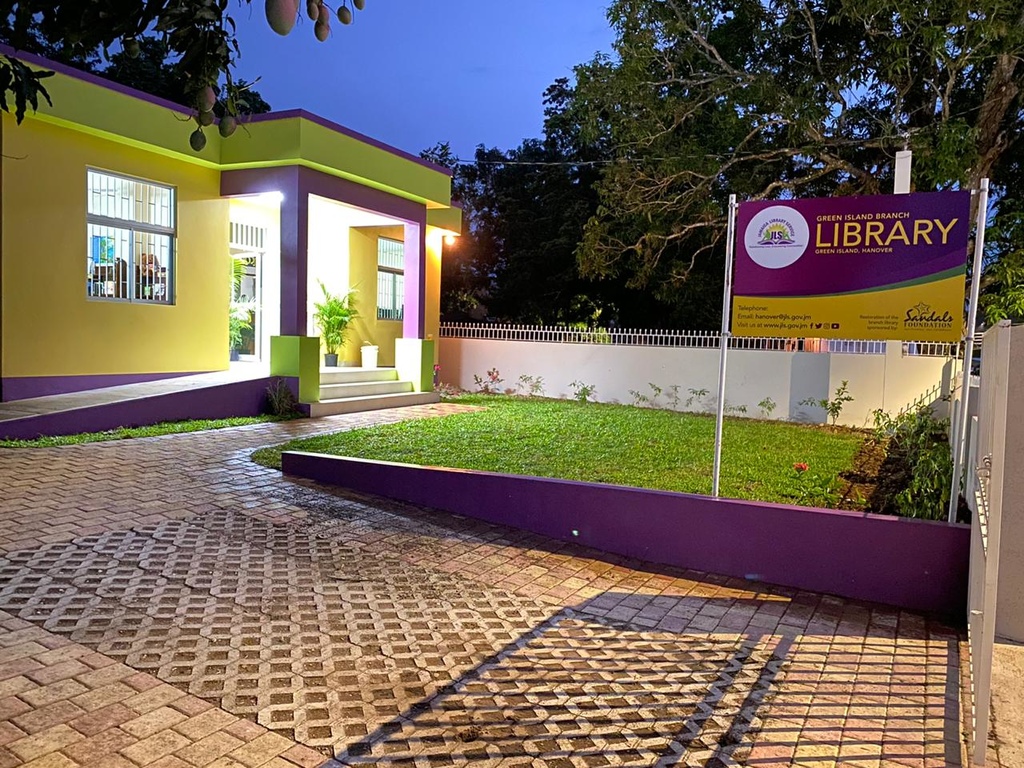 The upgraded facilities include a computer room, reading room for juniors and adults, kiddies corner, document room, office area, kitchenette for staff, and bathroom for staff and the public.

After nine years of closure due to dilapidated conditions and a more than $14 million dollar injection from the Sandals Foundation, the Green Island Branch Library has re-opened its doors to serve the residents of western Hanover.

The library has been an iconic community landmark for some 43 years before its closure, providing literacy and skills training programmes, research space, access to the internet and computer services.

Its closure in 2011 resulted in a significant gap being present in the communities served by its facilities and forced residents to travel up to 14 miles to neighbouring libraries.

Speaking at the re-opening ceremony held on Tuesday, June 23, Deputy Chairman of Sandals Resorts and President of the Sandals Foundation, Adam Stewart said the company did not hesitate to help restore the facility which he described as ‘the heart of community development’.

“For decades (the library has) served as a hub for educating the young and more mature residents of multiple communities.  It has been the source of knowledge-sharing, trusted advice, economic development, a safe space for connecting with friends and … the genesis of life changing milestones for those who use its services.”

Libraries, the Sandals Foundation President continued, are “the gateway to information that connects people to the rest of the world and they are the bridge that connects its residents to each other. (They) remain an important support service for community members to learn about their unique history and traditions and at the same time discover new and exciting global developments that will shape the future.”

The upgraded facilities include a computer room, reading room for juniors and adults, kiddies corner, document room, office area, kitchenette for staff, and bathroom for staff and the public. All have been made to be accessible to persons who may use a wheelchair or have reduced mobility.

Paul Lalor, Chairman of the Jamaica Library Service said the reopening of the library will have a major impact on the community of Green Island and the wider society.

“Libraries play a really important part in the social fabric of a community. It gives individuals the opportunities to come out and read, to access free internet and also it’s a place of refuge for many children who come in and are able to lose themselves in the books. That’s what we at the Jamaica Library Service try to do achieve across the island and thanks to the Sandals Foundation, we are able to get another location back up and running.”

The JLS Chairman anticipates that the facility will be actively used by the surrounding communities.

“Like all libraries, there are people that come for all different reasons but it forms a very central part in a community. It has an important role not only on the educational side but also on the social side so I think this (library) will see a lot of traffic over the next few months and hopefully for many more years to come,” said Lalor.

Click the photo gallery for highlights from the official reopening

And in expressing joy at the re-opening of the facility, Lorna Salmon, teacher at Green Island Primary School, said she is beaming with pride.

“We have prayed for this moment for such a very long time and we are so appreciative of this donation. We had a number of challenges in the community when the library closed. The young children were unable to complete their assignments because they would usually come over during their lunch break or on Saturdays to utilize the resources here so it was really challenging. Additionally, the high schools' children with their SBAs and CSEC, they were also left in the lurch with no internet at home. Sometimes they would have to travel to the parish library in Lucea but for those who didn’t have the resources they would just have to make due.”

The Sandals Foundation became aware of the plight of the Green Island community following a Jamaica observer article in August 2018 and commenced discussions and plans with the Jamaica Library Service to renovate and upgrade the new structure with state of the art modern facilities.  The library will serve numerous communities, including Green Island, Cave Valley, Kendal, Orange Bay, Rock Spring, and Cousins Cove.