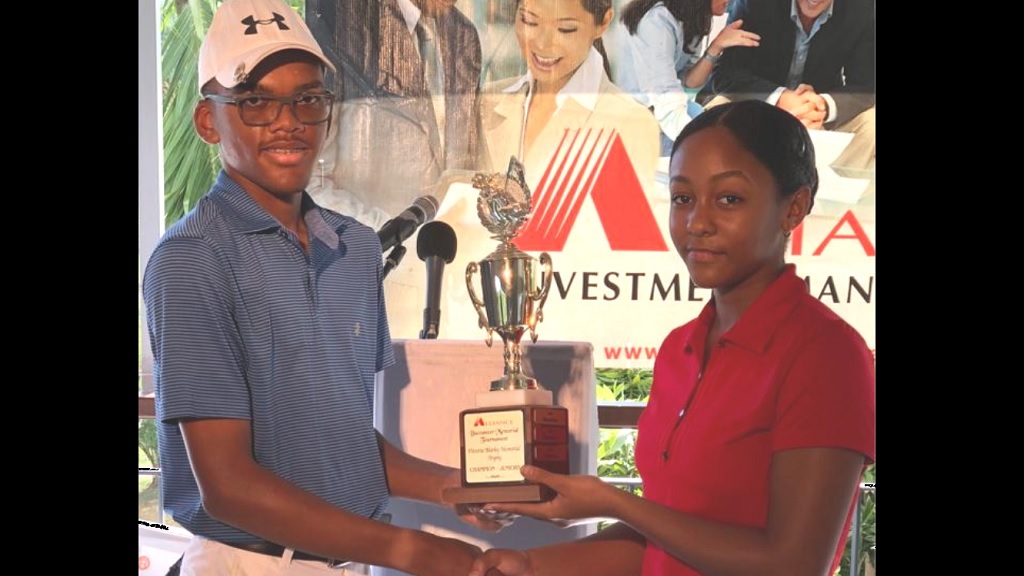 Matthew Grant (left) with Emily Mayne after he won the Vitoria Marley Trophy at AIM Buccaneers tournament in 2018.

Matthew Grant came out on top in the fourth match of the Sandals Foundation Junior Golf Series on Sunday at the Caymanas Golf Club in St Catherine.

Rocco Lopex and Aman Dhiman, both scored 79, to finish in a dead-heat for second.  Lopez was the best performer when the third match was played last November.

Grant has been a junior golfer for some time and has shown promise in his game.  He won the junior section of the Alliance Buccaneer Memorial Golf Tournament, which was held in November 2018 and was awarded the Vitoria Marley trophy for the best junior player in the tournament.

The next best performance on Sunday came from Michael Lowe who shot six-over-par 78.  His score included two birdies, four bogeys, and two double bogeys.  Kristian Chin (79), who was just one stroke behind, grabbed the second spot while Tequan Goodwill (83) was third.  They competed in the boys' 18 and under category.

The girls' 15 and under category went to Winni Lau, who posted 94, ahead of Kristen Chin (116).  Only two girls competed in that age group.

The beginner golfers competed as a combined group of girls and boys.  They also play nine holes instead of 18, which the more experienced golfers play.

The top three in the co-ed semi-advanced group were Kemari Morris (46), Victor Salazar (52) and Cyrus Walker (65).

Over 35 golfers competed in the fourth match of series.

After four matches in the series, Michael Lowe, Ryan Lue, and Shasa Redlefsen are joint leaders with 300 points each.  The joint leaders are followed by Samantha Azan (280) and Rocco Lopex, Aman Dhiman and Jordan Demetrius, who all have 270 points.

The final match in the series is scheduled for Saturday, January 25 at the Constant Spring Golf Club in Kingston.

Lopez said the series allows the golfers to compete on several golf courses across the island and experience different course conditions.

He further said it is part of the overall programme to improve the island's junior golfers, as well as to help the team prepare to take on the Caribbean and win its first junior championship.

The next Caribbean Junior Amateur Golf Championship is scheduled for later this year in the Dominican Republic. Jamaica placed second in 2018 and 2019.