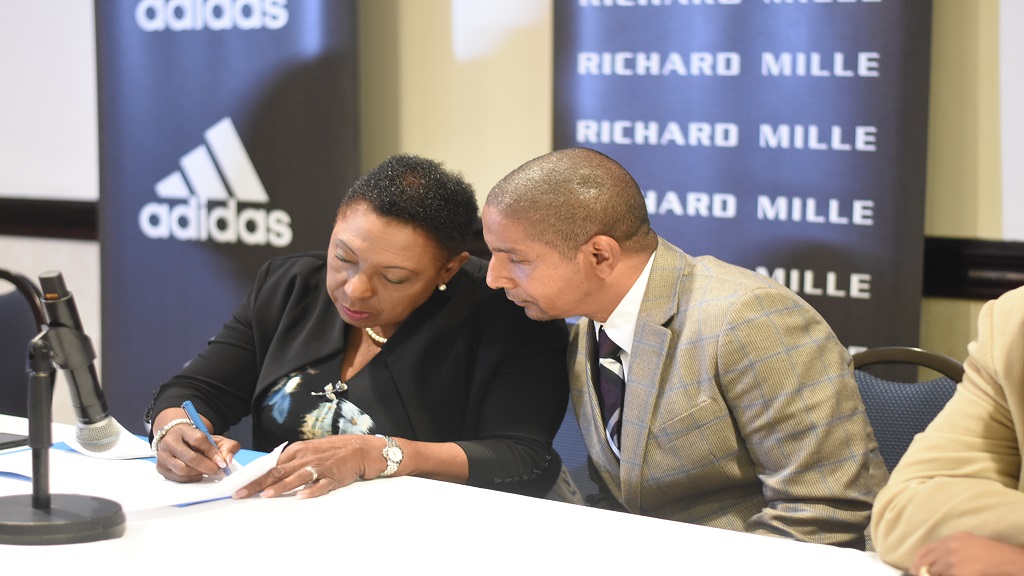 Minister of Sport, Olivia Grange (left) gets the attention of Delroy Williams, mayor of Kingston, during the launch of the fifth staging of the Racers Grand Prix at the Jamaica Pegasus Hotel in New Kingston on Thursday, January 23, 2020. (PHOTO: Marlon Reid).

The Minister of Sports, Olivia Grange, has encouraged the operators of the Racers Track Club to consider opening up the facility so cruise ship passengers, who will come to Kingston via the newly-constructed floating cruise ship pier at Port Royal, can visit the facility and watch the country’s world-class athletes in training if they so desire.

Grange was speaking last week at the official launch of the 2020 Racers Grand Prix at the Pegasus Hotel in New Kingston.

The Racers Track Club, which is based at the Mona campus of The University of the West Indies, was the home of Olympian and multiple world record holder, Usain Bolt for many years. While there, Bolt came under the guidance of world-renowned coach, Glen Mills.

“I want you to use your imagination to see how you can exploit this new opportunity that exists,” Grange said.

“The cruise ship coming to Port Royal doesn’t mean that it’s confined to Port Royal (rather) it has opened up Kingston that much more to the world.

“I want to say to you today, seize the opportunity, make your training facility (open to the public), and when you train, remember you could end up with visitors watching you. So if you want you can make that one of the tour stops,” Grange stated.

The minister also told the press conference that some of the 2,000 passengers who arrived in Port Royal last week Monday on the first cruise ship to dock at the once ‘wickedest city’ on earth, visited the Bob Marley statue and Independence Park, which houses the National Stadium and ‘Statue Park’.

Grange said that in order to engage the visitors, a “little track” was added to allow those who wanted to, to run.

“Just to sprint, just to have the experience and also to meet some of the athletes who will sign autographs for them,” said Grange.

Three more cruise ships are set to call at Port Royal in 2020.

Upgrade of National Stadium to start early in 2021 - Grange