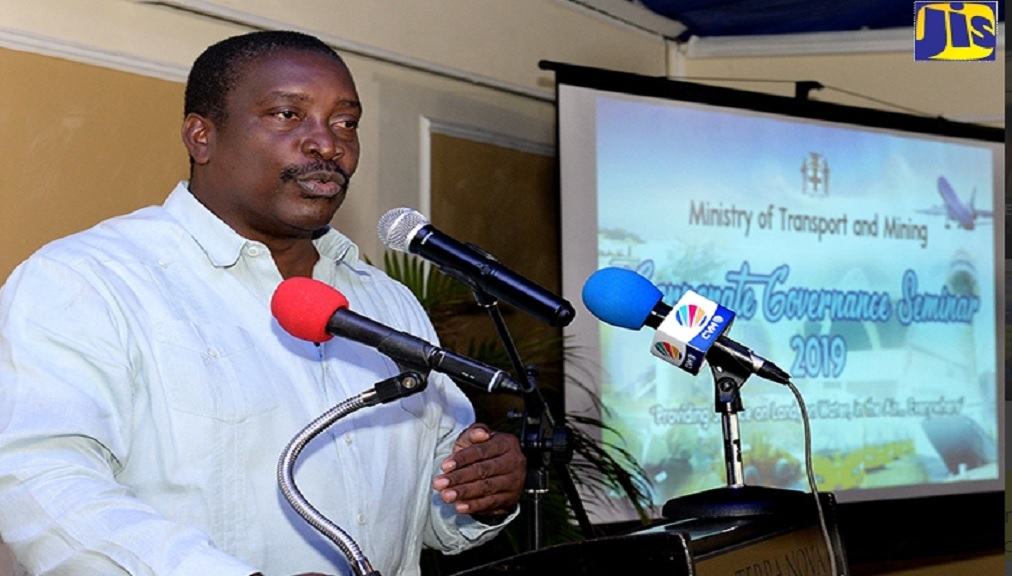 Transport and Mining Minister, Robert Montague, says the Ministry has granted some 90 exploratory licences for semiprecious minerals such as cobalt, copper, gold, silver and zinc, since March 2018.

“Right now, almost every square inch of Jamaica is under a prospecting licence for some kind of mineral. The beauty of it is that most of the companies that are prospecting… are Jamaican-owned. So if [for example] gold is found… in commercial quantities, the profits will stay here,” he said.

Minister Montague said that the Government is encouraging and facilitating the exploitation of minerals “in a very sustainable and structured way”.

He was speaking at a Corporate Governance Seminar at the Terra Nova All-Suite Hotel in St. Andrew on Thursday, November 14.

Montague said that in a bid to encourage the mining of semiprecious minerals, the Ministry’s Mines and Geology Division hosted a series of workshops and training seminars for industry stakeholders.

This capacity-building initiative, conceptualised by the ACP Group of States, aims to enhance the profile and improve the management of development minerals. These include industrial minerals, construction materials, and dimension and semiprecious stones.

The engagement is being implemented by the United Nations Development Programme (UNDP), which jointly finances it with the EU.

According to a UNDP publication, development minerals provide crucial inputs for domestic economic development, such as infrastructure, manufacturing, construction and agriculture.

Additionally, they have the potential to be high value, in terms of national development.

The Minister noted that the programme has benefited local jewellery makers who are now utilising semiprecious stones, “which is a huge market”.

Meanwhile, Montague is imploring Board members of the Transport Ministry’s agencies to remain “above board” in their stewardship.

He reminded them that they were appointed to ensure that the Administration’s policies are implemented within the framework of Jamaica’s laws.

The Minister said, against this background, he has insisted that corporate governance seminars, such as Thursday’s engagement, be staged “so that my Board members know [and operate] within the rules and regulations”.

It aimed to expose the appointees to matters relating to the relevant and appropriate corporate governance principles, policies, procedures and legislation that are consistent with the Public Bodies Management and Accountability Act, and the Corporate Governance Framework.