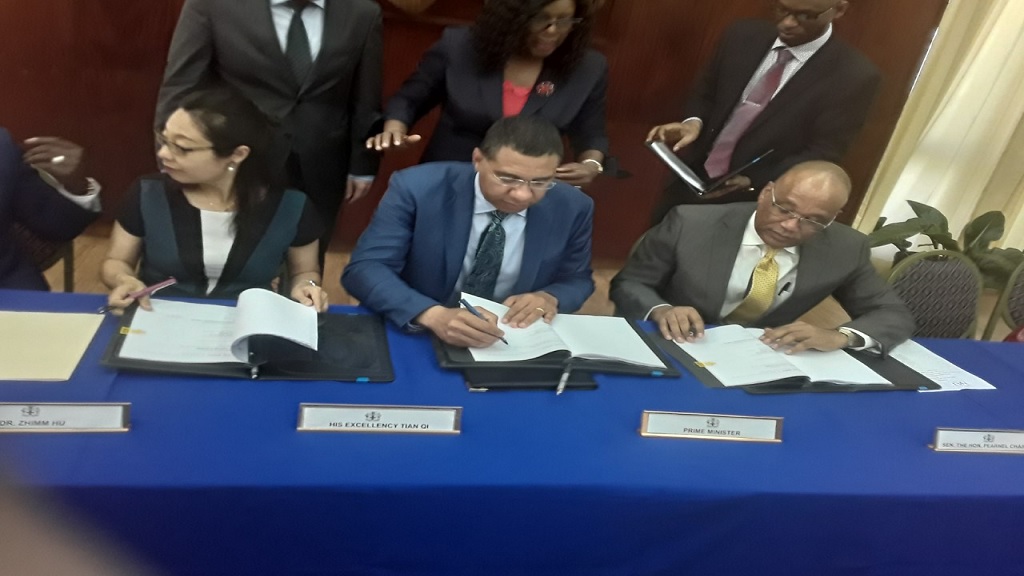 Prime Minister Andrew Holness (centre) with President of CHEC Americas Division, DR Zhimin Hu; and HAJ Board Chairman Norman Brown at the signing ceremony held at the Office of the Prime Minister in St Andrew on Tuesday.

The government on Tuesday inked a deal with China Harbour Engineering Company (CHEC) for a $9.5 billion Catherine Estates housing development at Bernard Lodge in St Catherine.

Th project will be handled on behalf of the Jamaican government by the Housing Agency of Jamaica (HAJ) and is being fully financed by CHEC.

The deal was inked by Prime Minister Andrew Holness; President of CHEC Americas Division, DR Zhimin Hu; and HAJ Board Chairman Norman Brown at the Office of the Prime Minister in St Andrew.

Holness said Catherine Estates will provide an affordable and safe housing option for Jamaicans from the lower income bracket.

He said there would be nine acres of land reserved for the construction of a primary and secondary school in addition to a church, a police station and a health centre.

Holness, however, warned that the community would not be allowed to be taken over by uncouth elements.

“We will not allow this community to descend into chaos and disorder. It won’t be low standard,” he said.

It is projected that there will be 1,650 units available for potential homeowners and the project is set to be completed over a 54-month period.

Units will sell for $5.5 million and $6.6 million each and space will be allowed for expansion.

“We are providing you with the starter solution,” Holness said.

“This will be the largest housing construction in St Catherine since the development of Greater Portmore in 1992,” he added.

623 more gated housing solutions in the works for Portmore