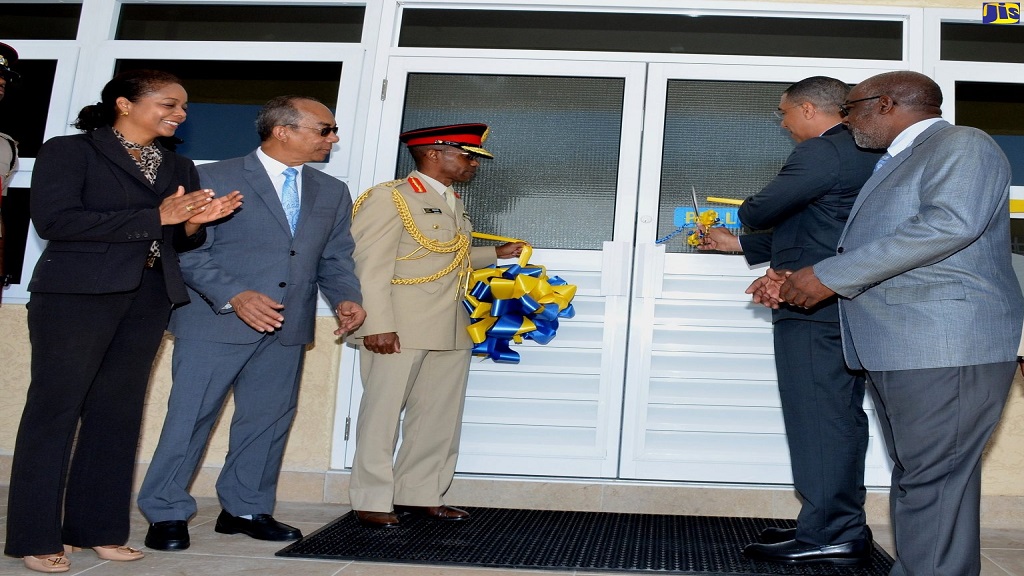 Prime Minister Andrew Holness has said the Government is committed to increasing investment in the nation’s security forces.

Holness said he will be meeting with Minister of Finance and the Public Service, Dr Nigel Clarke, and the National Housing Trust (NHT) Board, to identify additional resources to support the Jamaica Defence Force (JDF) and the Jamaica Constabulary Force (JCF).

“At the end of the day, the public will reap the dividends of these investments,” Holness stated.

He was addressing the official opening of the JDF’s new Lathbury Barracks at Up Park Camp, St Andrew on Friday, April 26.

The barracks house the offices of key command positions at the company level, and provide accommodation for soldiers below the rank of corporal.

The project, which was undertaken through $2.5 billion in funding from the NHT, consists of six buildings, with the first three already completed. The fourth structure is in an advanced stage of construction, and the foundations for the final two have begun.

Holnes acknowledged the contribution of former Prime Minister, Portia Simpson Miller, in the undertaking, noting that “it was under her leadership that the NHT was given direction to make the allocations”.

He noted that outside of the JDF, the NHT has been assisting with building out the infrastructure of a number of police stations across the island.

He expressed satisfaction with the work of the JDF in empowering youth through the Jamaica National Service Corps (JNSC). The JNSC is part of the Learn, Earn, Give and Save (LEGS) Programme, and aims to create an avenue for young people, aged 18 to 23, to be fully empowered through national service.

Holness noted that 640 of the 2,076 young people who were recruited under the JNSC, have been absorbed in the JDF, with 1,170 currently undergoing training, and others available for engagement through the JCF, the Jamaica Fire Brigade and Customs and Immigration.

“It is an idea that is making an impact on the society, and we intend to expand that,” he indicated.

Chief of Defence Staff, Lieutenant General, Rocky Meade, expressed gratitude for the financial support, and noted that the barracks will go a far way to improving the lot of the soldiers.

He said the JDF had gladly accepted the prime minister’s charge to play a greater role in nation-building and economic development through the JNSC.

He noted that the JDF has had to restructure to be in a better position to deliver on what is required.

NHT Chairman, Lennox Channer, for his part, said the agency was pleased to support the barracks project, while Brigade Commander of the Jamaica Regiment, Brigadier Radgh Mason, assured that the buildings will be cared for and maintained for generations to come.