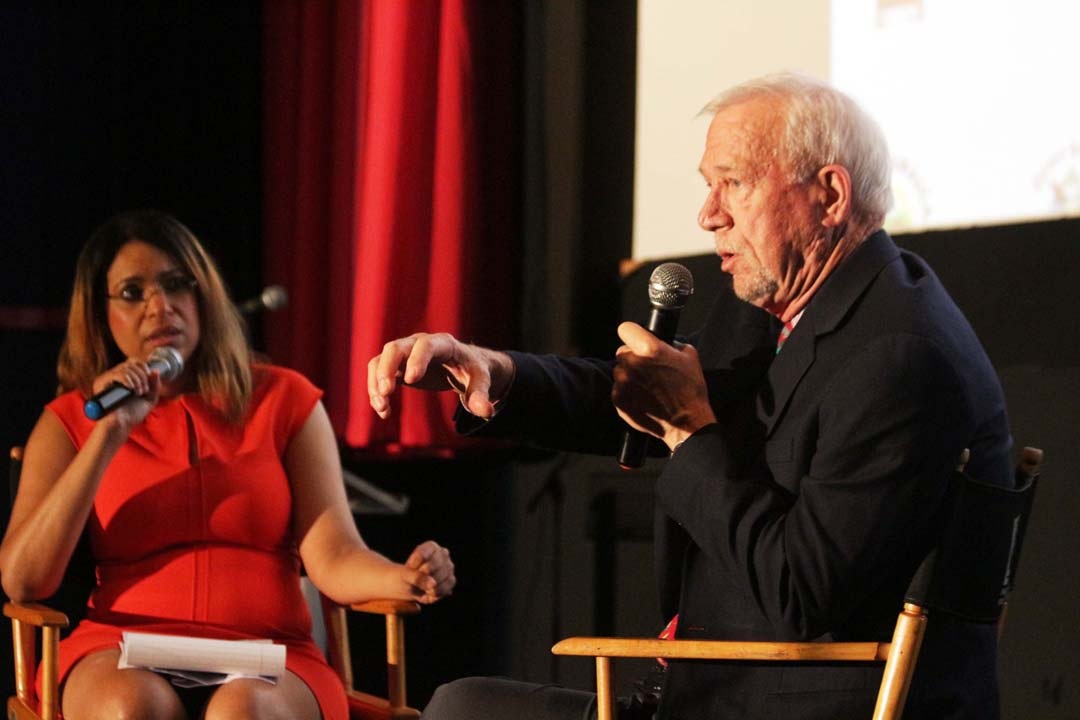 Walter Robinson, investigative reporter at the Boston Globe, makes a point in discussion at the screening of Spotlight at the Carib theatre in Kingston on Wednesday. Also pictured is Zahra Burton, CEO of Global Reporters. (PHOTO: Marlon Reid)

Members of the local media fraternity as well as individuals and groups working with children in Jamaica attended a special screening of the film Spotlight at Carib theatre in Kingston on Wednesday evening.

The film is a factual presentation of a group of reporters at the Boston Globe who brought down a number of high-ranking officials in the Catholic Church in 2001. They also took on the system within the church that harboured a culture of cover-up of priests and clergymen who molested children.

The screening was presented by Global Reporters in conjunction with the United States Embassy in Kingston. Also in attendance on Wednesday was Walter Robinson, the editor who led the investigative reporting team.

Zahra Burton, the CEO of Global Reporters, said the aim of the project was to showcase, to local reporters and others, a case study of how the code of silence could be cracked.

Burton said it was especially important to do now, with the wave of sexual offences being committed against children in Jamaica, some of which involved members of the church.

Burton said, "I decided to do this project, because I felt like we in Jamaica could always use some reinforcement, when it comes to investigative journalism.

"I believe that given the climate that we are in currently, with the news that broke at the beginning of this year, regarding child abuse issues, that's a problem for our society," Burton said.

The Moravian church in Jamaica became embroiled in a sex scandal at the start of the year, after one of its pastors was allegedly caught having sex with a minor in a car. That spring boarded into other allegations of sex with minors being brought against more pastors and officials. All are still before the courts.

A Pentecostal pastor was also sent to prison for sex with a minor with the Centre for the Investigation of Sexual Offences and Child Abuse (CISOCA) coming out to say that high-profile perpetrators of this crime are pastors and police.

Burton is hoping that the premier of the movie in Jamaica will help local journalists to more effectively investigate child abuse cases in Jamaica.

"I think the only way to know that (if the objective has been met)," she said, "is to see what happens in terms of reporting. Is it more thoughtful? Is it more incisive? Is it fair, and is it accurate?"