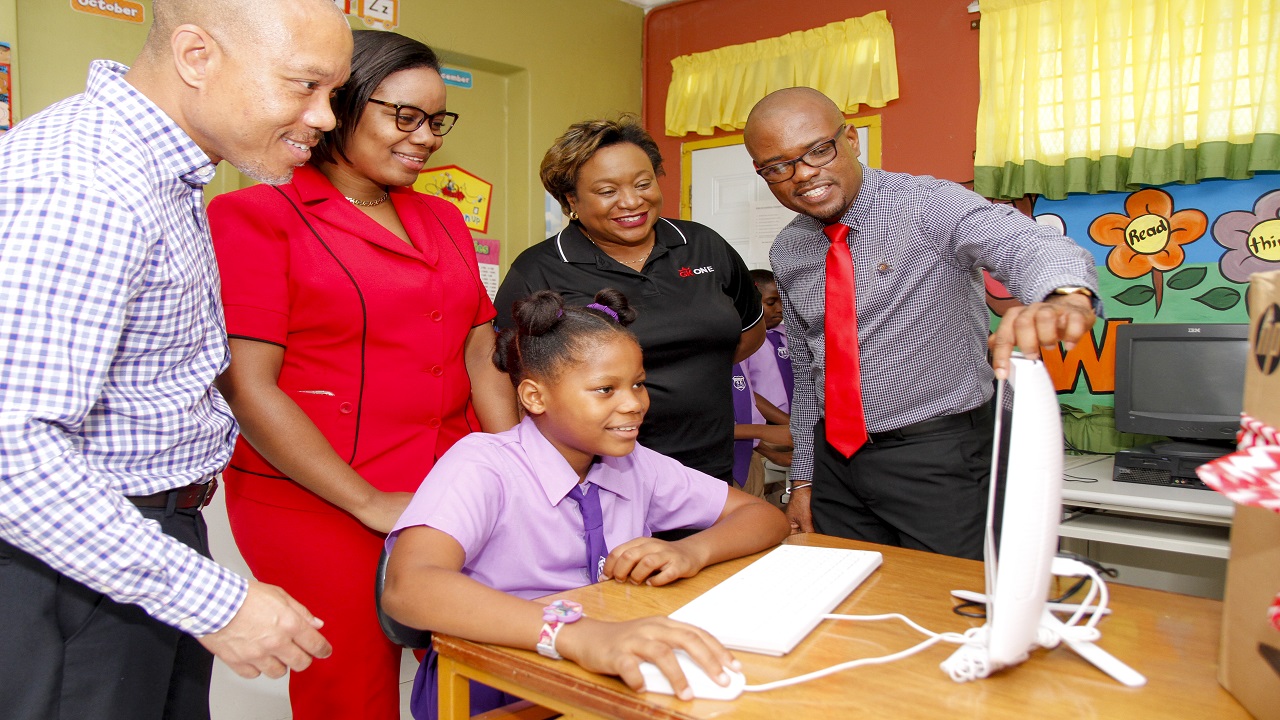 Students from two primary schools were met with much-needed surprises as they returned to start the new school year earlier this week.

The Ascot Primary and Alpha Infant schools both benefitted from donations in kind from leading insurance-provider GK Insurance (GKI) to help fight learning disabilities as well as to improve learning environments for children.

Ahead of the bustling back-to-school week, the Ascot Primary School was gifted with five all-in-one computer units for use in their resource room designed to assist children with learning disabilities through interactive technologies. The room, which normally holds 38 students per session, had only five functioning computers with an additional 10 that are currently defunct.

GKI General Manager Andrew Leo-Rhynie said, “Education is critical for any country to excel and early childhood education forms the foundation for the future. By playing our part in developing the infrastructure and helping to provide opportunities for them to grow means a world of difference because they in turn will make a world of difference.” The company, which functions as the insurance arm of the GraceKennedy Group, focuses its corporate social responsibility efforts on early childhood education.

Mark Jackson, principal of the Portmore-based Ascot Primary, estimates that about 20 per cent of the students at his school would fall into this category. He said, “While learning, many of our students respond to audio-visuals better. So, this donation comes at a time when the Ministry [of Education] is emphasising differentiation in instruction, which means you have to look at the different learning styles of your students and meet them there.”

The school, which has a rich history in the performing arts, currently boasts a literacy level in the nineties. Jackson, however, said, “The numeracy is a little behind and struggling, but it’s at 75 [per cent]. I’m hoping it will go to 85.”

The donation to the Alpha Infant School was initiated by two GKI staff members whose daughters both attend the institution.

Leo-Rhynie said, “When our team members approached us and presented their initiative, we noted their daughters’ classrooms were not the only ones in need of attention.” The GKI team then decided to outfit all the remaining classrooms with air-conditioning units thereby rendering the entire infant school to be completely air-conditioned, impacting the lives of all its approximately 266 students.

Nicollette McDonough-Foster, the school’s principal, said, “Our children do their medicals so we can get feedback to know how much of the student population is asthmatic and who has allergies. We found that the heat affected a lot of students and they’d have to re-hydrate. We’d get coolers in the class but that wasn’t enough. I’m glad we could have fulfilled this five-year project this year through the initiative of GK Insurance.”